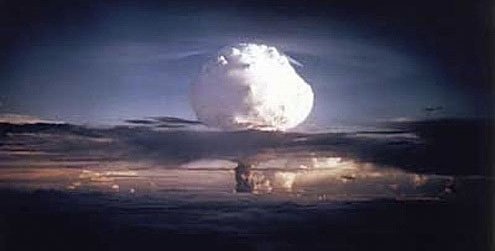 Why tempt them with our fears?
S

ince early August American columnist Nicholas Kristof has written solemnly about the prospect of a nuclear terrorist strike against New York City. He describes the consequences in laconic detail, with a reader-friendly touch. “If a 10-kiloton nuclear weapon, a midget even smaller than the one that destroyed Hiroshima, exploded in New York City’s Times Square, the fireball would vaporize or destroy the theater district, Madison Square Garden, the Empire State Building, Grand Central Terminal and Carnegie Hall (alone with me and my building). The blast would partly destroy a much larger area, including the United Nations. On a weekday some 500,000 people would be killed.”

Kristof justifies his theme using topical references. He cites Al Qaeda nuclear threats intercepted by U.S. intelligence and adds (correctly but unoriginally) that nuclear weapons, or parts of them, are available on the largely unchecked black markets of the former Soviet Union. He quotes from books by “experts” and permits a former defense secretary, William Perry, to speak ominously (“We racing toward unprecedented catastrophe.”)

In another column, Kristof offers deterrents. “Loose” uranium and plutonium should be secured with Russian help. Countries seeking nuclear membership should be dissuaded and U.S. borders made more secure. President Bush might even consider giving Iran and North Korea “trade benefits” in exchange for abrogating nuclear “aspirations.”

Kristof’s stricken enthusiasm descends from Cold War-era talk of nuclear conflagration and mutually assured destruction, which gave Hollywood a fictional toehold into the world of worst-case scenarios. Since 1977, when George Lucas’ Star Wars reinvented special effects, most global cities have been destroyed 10 times over on film, usually with meticulous precision. The culprits have been tyrants, space machines, natural events (germs, too), and an array of talented evil-doers. Over decades, destruction and deliverance were made to play out time and again in the American imagination, and a whole class of heroes created to turn back or redeem the monstrous — until Sept. 11, when reality collided with fiction producing anxiety, awe and anticipation.

During the early 1960s, when the Cuban Missile Crisis scared the world silly, a world-ending event seemed certain. Film drama and satire — “Fail Safe” and “Dr. Strangelove” — cheer-led the macabre. Ivy League academics calculated not the timing of the next world war but how casualties would reach hundreds of millions. “Overkill” was a fashionable word.

When the Soviet threat receded, China was substituted; it had hydrogen bombs and leaders who spoke menacingly at both Washington and Moscow.

In the early 1970s the still-nationalist Egypt of Anwar Sadar roared at atom-armed Israel, with Russian compliance. A nuclear exchange in the Middle East seemed entirely possible.

Passionate rivals India and Pakistan continue quarrelling, and each has detonated test weapons in recent years (though neither is ever included in the pop version of global doom; India hardly seemed a candidate to drop a bomb on Chicago.)

North Korea, a classic anti-nation, retrograde but unconvincingly menacing in the mold of Hoxha’s Albania, has made rumors about fission.

But it is terrorists, giddy in the post-Soviet chasm, that have emerged as the leading constants in the “what if?” sweepstakes. Long before Al Qaeda’s pre-eminence international governments fretted that angry rogues (not rogue states) — piqued Serbs, mean Tamils, nefarious Chechens, re-invented Nazis — might get nuclear technology and use it.

This has not happened.

Kristof’s explanation for 55 years of nuclear “peace” is no explanation at all. What lies ahead, he says, is what counts.

But let’s look at it another way.

If, as is commonly held, the most cherished dream of Islamic terrorists is the destruction of the United States and Israel, why are these terrorist and their leaders any less beholden to stall before the same logic that unsettled their predecessors: namely, that by exploding nuclear weapons they incinerate both enemy and cause? Where, in the belief that Islamists would destroy New York City, is any acknowledgment that even terrorist schemers develop plans to accomplish goals while protecting themselves from unproductive acts?

While terrorists may use their members as bombs, leaders still dictate the missions; few are the freelance jobs. Such leaders know that to survive and succeed they must maintain fright, not dissipate it.

And fear has both method and limit.

I’m reminded of Joseph Conrad’s anarchist pamphleteer in “The Secret Agent,” The Professor, who walked through London with detonator and bomb strapped to his body, feeling superior. “I have the means to make myself deadly,” he tells fellow anarchist Ossipon, “but that, by itself, you understand, is absolutely nothing in the way of protection. What is effective is the belief that those people have in my will to use the means. That’s their impression. It is absolute. Therefore I am deadly.”

Speculating on threats posed by adversaries is not unwise – so long as we know that our imagination abets enemies seeking insight into our nightmares and can, in word more than deed, help build on how we wish to perceive our own undoing.

The events of Sept. 11 confirmed that movie disaster cataclysm could be literally hijacked into reality with devastating effect. But if a shortfall in imagination assisted those plotters, we must consider that the exaggeration of horror can also have unwanted consequences.

Democracy obliges both dreams and nightmares, so self-censorship is no solution.

Yet at times we must be ginger with our more emotional impressions, knowing their power to influence the will of others, and to tempt fate.

If we surrender all our psychic detonators, the gift will of our worst fears will be received gladly, and perhaps fulfilled to close the circle.