Over there, and desperate 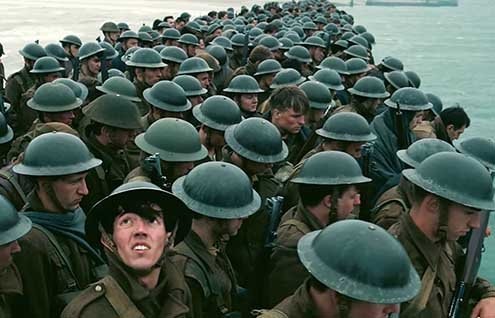 The Battle of Dunkirk ended with more than 100,000 dead among British, French and German troops.
T

he film “Dunkirk” is not your typical war movie. Instead of a battle, director Christopher Nolan—of “Batman” and “Inception” fame— takes on the potentially humiliating evacuation of more than 300,000 Allied soldiers pinned down by the Germans on the beach of Dunkirk, France, in May-June 1940. The action took place 18 months before the United States entered what was fast becoming World War II.

It’s not John Wayne’s “Sands of Iwo Jima” (1949), not gory “Gallipoli” (1981), not last year’s blood-and-guts “Hacksaw Ridge.” “Dunkirk” is the story of confusion, of the innate drive for survival, of the futility of every safe haven. It’s not the story of heroes and heroism, though Nolan gives the audience some of each. War history buffs — the sort who savor maps and discussions of strategy—will be disappointed.

Three cross-cut stories (infantry, navy, air force) and time-lines (one week, one day, one hour) privilege the personal over the historical and, with an exception or two, desperation over the calm hand of the heroic. The first story is that of the ordinary foot soldier. Played by 19-year-old Fionn Whitehead, Tommy (to emphasize he’s “everyman,” he has no surname) is very much the scared kid doing everything he can to survive, even pretending to be part of a team evacuating the wounded. He and his mostly mute French pal take us through a week of being sitting ducks for the German artillery.

Second is the daylong effort of the “little boats,” many captained by the ordinary men and women who own them, to reach the French shore and rescue the marooned soldiers. Mr. Dawson (no first name), played competently but to stiff-upper-lip stereotype by Mark Rylance, represents the Brits who took their 700 small craft — able to reach Dunkirk’s shallow shore when larger ships could not—across the English Channel.

The one-hour sequence, the third, features British Spitfire fighter planes, represented by Tom Hardy as the pilot who makes the film’s single heroic gesture by taking out German dive bombers, even though he knows he will have insufficient fuel to return to England.

In all these tales, water is the enemy, drowning is the ever-present threat to life, claustrophobia a constant companion. Especially excruciating are the days and nights a dozen infantrymen spend trapped in the belly of a half-beached trawler used as target practice by the Germans, more water seeping in with each bullet that penetrates the hull.

“Dunkirk” underscores the ordinariness and fungibility of soldiers in wartime. The infantrymen are all dark-haired and grimy, hard to tell apart. The pilots are blond, their faces covered and identities effaced by masks and helmets. Despite the enormity of the enterprise, and the focus on a handful of people, Nolan allows us to ‘know’ few of the protagonists. Most of the cast of more than 1,500 are extras, portraying all the soldiers who were human fodder in this stage of the war. Even the actors who are not extras are mostly unnamed, or partially named.

The sound of the film contributes to the overall sense of suffocation, denying the soldiers— and the audience — quiet and respite. Much of the dialog is muffled, with the soundtrack — whether crashing waves or the singular tones of Hans Zimmer’s score — often louder than the voices. The cinematography enhances the feeling of confinement. Nolan never provides what he has called in interviews “God shots”—scenes from above the fray that show the larger picture. Instead, the audience is trapped on the beach, in the wheelhouse of a boat, or in the cockpit of a Spitfire, with the men.

The overlapping time sequences —arguably Nolan’s primary contribution to the genre — can be confusing, though in retrospect the purpose seems clear, and the relentless cross-cutting between stories keeps things fresh while heightening tension, especially as the stories mesh.

The film ends with Winston Churchill’s by now iconic speech: “…we shall defend our Island … we shall fight on the beaches … we shall never surrender….” But it’s not his soaring, familiar voice we hear; it’s the teenaged soldier reading the words in a newspaper, tempering what has become larger than life with a touch of quotidian reality.

Shot in 70mm and Imax, not digital, “Dunkirk”is meant to be seen in a theater with film projection.