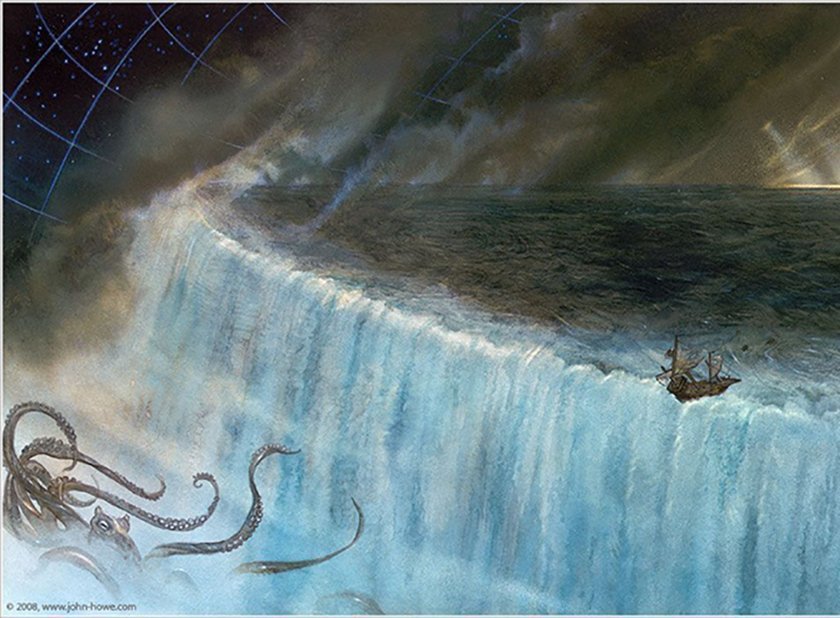 Who said anything about a round world?
T

o believe the world was flat conferred wonderful advantages to any boy who would not budge from this belief. At age 7, I would not, much to the chagrin of my parents, who warned me of irrational behavior, which, to me, sounded like something to pursue, maybe as a vocation — if only I knew what it meant.

My belief corresponded with an early fascination with the “Titanic” disaster, explained in books as the story of an unsinkable ocean liner that struck an iceberg and dealt a huge blow to human hubris. Since hubris sounded like a soft bread or perhaps a liquid detergent, I was unimpressed. I was very much taken by the idea that such a huge vessel simply could not make it from one place to another and instead decided to head downwards, lest (in my mind) it fell off the cliff that lay ahead. Never mind icebergs or soft bread, the ship had done its duty.

For this I was sent to a child psychologist who suggested to my father I draw pictures. I did, of ships sinking and planes in flames. I was ultimately declared incurable (if I indeed understood what the two men said), and advised I should think more about lambs than sinking ships. The advice went nowhere and my flat-world obsession only grew in size and sophistication,

My “maps” showed the school no longer existed, it was past “where the flat part ends.”

One day I told my mother I could not go to school because my “maps” showed the school did not in fact any longer exist, it was past “where the flat part ends,” as I remember telling her with immense eloquence.

She sent me anyway, but I went to the park instead, and there I was discovered by the local police officer who took me home and advised me against truancy. I told him he probably meant hubris, but this just confused him and he left me at home to deal with the wrath of my elders.

My father decided he’d change the subject, leaving the flatness of the world out of everything and concentrating instead on his favorite subject, the end of the world. He’d seen signs of this in the Suez War, something about an Egyptian canal that Nasser had nationalized. For a time I thought the canal was called the Nasser National. He also told me the Soviets had exploded a bomb the equivalent in power of 10,000 of the bombs dropped on Hiroshima and Nagasaki. Amazing, I told him, unaware of what he was talking about. I then asked him why these bombs could not be dropped in a place past where the world ended.

Christopher Columbus meant nothing to me, nor did the New World, even though I allegedly lived in it. I cared only about the place where all ended and from which all fell.

This made errands at times impossible, since my elaborate data often showed beyond a doubt that the local grocery store was in no man’s land. It did reappear from time to time, an iceberg of its own, when I was given enough pocket change to buy candy or caramel bars.

The neighbors to the left of us were on the known earth, but those to right, with the snarling black dog, were not.

The encounter lasted perhaps 15 seconds, but the descent of this president-to-be into my square world undid its dimensions.

My flat-world existence lasted for the better part of the year, the “Titanic” disaster my only link to conversational reality, the walls of my room plastered with posters and images of ocean liners. My father continued his heroic efforts to woo me back to “adult reality,” as always failing to recognize the difference between a 7-year-old and an adult (which made his world flat in its own way, and perhaps the subjective world as a whole).

Then came the change. I had seen on our tiny TV images of a political candidate running for president and seen him photographed in all manner of places. He seemed to me at first one of my father’s make-believe characters, like Nasser National. But one night my mother had a small cocktail party and I was invited out briefly to meet the guest. I was in my pajamas and wore a rehearsed look of boredom, as if I’d prefer to be on a lifeboat.

But suddenly my father guided me to a man and explained who he was and asked me to please shake his hand. It was immediately evident who this man was. He had come from the other side, from the TV world. He had come from his side to my side, as if to bridge the gap, and I remember the grip of his hand and his smile. The encounter lasted perhaps 15 seconds, but the descent of this president-to-be into my square world undid its dimensions. If he was out there and could emerge from his protective layer, then so could I, and I came to accept that most ships that sailed across the sea did not sink, the same for the planes the that flew over it.

I was comforted and resolved even to accept school as part of my world. I came to understand the word hubris as presumptuousness, the idea that man could build constructions that could defy nature and last forever. I began to believe modern man had progressed beyond the superstitions of a world confined by borders that ended, ended simply because people could see no further. I resolved to become a great optimist and solver of problems.

Until some people shot dead the man whose hand I shook, sending him back to his place in the flat earth, and one event after another came to teach me that the species is doomed to consider itself bigger than the calamities that might befall it, meaning in my mind that all of us, forever, were destined in one way or another to see the earth as flat, and to imagine that at any given time they might fall into an abyss. And that this would make them worry for the rest of their lives. They would, in a way, be 7 forever, or exposed to seven-ness. And I was not wrong.