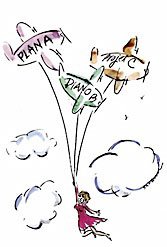 Swept away, or... Drawing by Suzanne Dunaway.
L

aughter and chatter in two languages spill out of my cramped living room in Rome and into the hallway of the apartment, where the air smells of tender baccalà seasoned the Jamaican way and the cigarettes of smoker pals who are sequestered in the kitchen. After years of promising to visit me, my former roommate and her husband are here from Los Angeles and I am honoring their arrival in Italy as much as I am, secretly, celebrating my continued presence here.

My old “roomie” and I have seen each other through the frenzy of a television newsroom, the sweet and sour of various romances and the kinds of family challenges that poignantly signal our growing maturity. She knows better than to ask me what so many people still do — “When are you coming home?”

It is a question that punctuates my life in Rome, particularly now that my marriage to an Italian has ended. To those who knew me before I moved here, this is my life “overseas,” my life “away,” my life “there.”

But my life has always been somewhere else. I began toting a passport before I started school, leaving New York to live in Jamaica where my parents had grown up. Then back to the U.S., collecting a handful of mailing addresses in different cities before leaving for Italy. In some places, I have grown emotional ties that reach down into who I am, like trace elements found deep in the soil. Those ties are blessings that link me to people who care. People who ask, every once in a while, “When are you coming home?”

Refugees are those who have been uprooted from their home turf, torn away from their villages and nations by war and hunger — the globe is rife with man-made and natural disasters. Millions of people move simply to survive, but many would never think of moving otherwise.

Those who enjoy the privilege of choice make less urgent decisions, often finding themselves surprised by the difficulties that can ensue. The circumstances of my own life in Italy have often left me feeling as though I am swimming up river against the currents of sensible living. But the instinct that governs me remains the same — the search for a sense of well-being. Another privilege. And so I stay.

Rome is a place for strays, says a friend. Like the seagulls that have floated inland from the shore and are building nests on the rooftops of the city.

In buoyant tones, I reassure relatives and friends that we are living, after all, in an age of bargain air fares, high-speed internet access and calling cards. But there are schedules, budgets and obligations to be reckoned with and the distance between here and there is amplified when the loss of a loved one devastates. Nostalgia and grief can soften one’s resolve but ultimately, they make me cling more tenaciously to my sense of territory.

“I hope you get a great job here and you come back to live in L.A.,” whines a friend, who pleases me with her greed for my company. “What about your family?” asks a pal in New York, who like me, has no children, no new branch of the family tree to justify decisions. “What if you get sick?” asks my aunt, who, achey and anemic, is starting chemotherapy.

After my last trip to the U.S., I returned to Italy struggling with some of my own “what ifs?” But I was comforted by the familiar. Not so much by the unabashed prettiness of the old city, the gaudy pride of Piazza Venezia, or the exuberance of the street markets. I was reassured less by the details that made me fall in love with this city than by the quirks that reminded me that this is home turf. The loose tile just outside the elevator of my World War II-era building, the limestone deposits in my tea kettle, the anonymous neighbor struggling at the piano.

“You mean you’re going to stay in Rome forever?” people ask, aware I’m no longer wedlocked. How do you explain to someone who has not lived this way that there is no such concept as forever? That one lives on two or three tracks at a time, with Plan A, Plan B and Plan C lined up like jets on parallel runways. This does not mean that there are no preferences, that there are no plans, that there are no dreams.

I live my life on several levels, each level a composite of different locations, cultures and languages. Different relationships.

Forever? There is no precise answer to the question. It simply doesn’t apply.

“I hope you come back and see me again before I die,” says my father’s 95-year-old cousin, the one who may understand me more than anyone else. The one who ran away from home in Cuba to take up with some charmer in Jamaica. The one who, after burying two husbands, finds herself most at home speaking Spanish and English in the Mojave Desert of California.

I’m an American toddler who learned to play Red Light, Green Light on a sidewalk in Manhattan. I’m a Jamaican girl who crouched, knickers drooping, in the dirt, to catch a lizard. I’m a New York college student who, indignant, checked all the boxes when an application asked me to name my race. I am the Southern California reporter who kept thinking of moving on. I am a foreigner who has settled into a nook in the Roman landscape and who simply feels like staying put.

For now. Like the bowl-bellied gulls who surf the breeze at dusk and circle a Roman piazza instead of heading back towards the beach.

So on a rainy night just right for staying in, I cook the baccala’ that I bought at a deli in San Giovanni and fry the plantains that I picked out at the Piazza Vittorio market and I serve Jamaican food with Italian wine and American beer. And I watch old friends from afar mingle with my new pals, letting the pleasure of the moment percolate into the soil of my Roman existence.