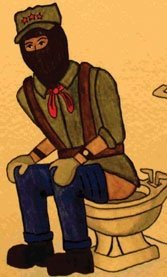 How the hell could they have such a thing in a public bathroom?
O

n trips to the United States, I often find myself detailing the differences between life in the New World and the Old. I’m often asked what I miss most about Italy, and I dutifully list such obvious amenities as cheap, strong coffee, excellent olive oil and bread you can sink your teeth into.

Sometimes I veer off on a tangent and mention less obvious things like well-dressed people in public spaces, hugging (and being hugged by) people you hardly know, and the generally invasive nature of Italian social life. In America, I would never dare to embrace even my closest friends, let alone peck them on the cheek; in Italy, it’s de rigueur.

Why do American noses point skyward at the mere mention of this eclectic cleaning device? My mother (yes, her again) expressed skepticism when I suggested that Americans didn’t know what they were missing. Here’s an excerpt from our conversation:

“You take a dump and wipe yourself with half a roll of Charmin, then diligently wash your hands and Purell them to boot, all the while forgetting that the poop-producing orifice is still unclean. I bet if people actually thought it through they’d come around. In a decade there will probably be a bidet in every new American house. All it needs is a proper sales pitch.”

“I don’t feel unclean,” she said. “Besides, how do you pull your underwear up if you’re all wet down there? I hate wetness. I have to feel dry. That’s a definite setback.”

“But you have a towel. You dry yourself with a little personal towel, then pull your pants up. It’s quite uncomplicated,” I replied confidently.

“All those little towels! What about a public bathroom? How the hell could they have such a thing in a public bathroom? And a woman my age, in my physical condition — how could somebody in my shape pull off a balancing act like that? What, you hover over it while water squirts up into you? And if you fall? How embarrassing! Then they find you passed out with a toilet nozzle in your tuches? What will people think? The whole thing is crazy.”

“It’s really not a problem, but I can see your point. You wouldn’t have to use it,” I reassured her. “We still have toilet paper in Europe. It’s not either-or.” I was beginning to equivocate.

“Never. Not in a million years in this country will you see a bidet, except maybe in the houses of the rich, who can’t say no to tchotchkes.”

It was beginning to sound like universal health care. I could already envision the protests, the angry town halls, the Joe Six-packs and hockey moms stirring up a grassroots revolution on behalf of Big TP. “Don’t take our toilet paper away! The bidet is un-American! The government can’t tell us how to clean our asses!!”

It would never work. Americans are too patriotic.

I decided to take an informal poll of American friends who live or have lived in bidet-friendly countries. One friend suggested to me that Americans just don’t feel comfortable touching themselves “down there.” Another boasted that Americans take showers “like crazy,” as if Europeans bathed once a week in a public bath house (implying the dire necessity of the bidet.) A third responded with an aw-shucksy anecdote: the first time her nephew eyed a bidet, he inquired what a second toilet was doing in the bathroom. Wasn’t one enough?

The bidet, contrary to prejudice, is not a substitute for the shower. It is not a replacement for full-body hygiene. Women and men alike use it to clean the nether parts when they’re dirty, and finish the job that toilet paper starts. Rumor has it the Japanese — among the world’s biggest bidet maniacs — have largely dispensed with the latter all together. Walking around has never felt so nice. Not to mention sex.

Think about it: it’s a discreet way of communicating with your partner. Instead of awkward interrogations of the “Are you clean?” variety, you just know they are. Someone who washes after every trip to the can cannot be anything else — and if they are, do you really want to be sharing an intimate moment together?

On my recent trip, however, I noticed a slight ripple of change, a tiny snippet in Newsweek arguing that the bidet is not only essential for combating “fecal contamination” (yuck!) but also in terms of green:

“Tossing all the TP in America would save 15 million trees, 17.3 terawatts of electricity, and more than 473 billion gallons of water annually; the environmental impact of bidets is minimal in comparison.”

Which would be good news for everyone, except maybe Big TP.