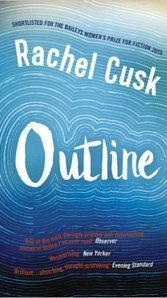 Faye is a divorced writer headed from London to Athens to teach a summer writing course. But this is not a novel about a story. It is a series of stories, of confessions really, accumulated and spoken by the people Faye collects along the way.

There’s the aging British-educated Greek billionaire she meets on the plane. She refers to him only as “my neighbor” and (while flirting) he will tell her of broken marriages, betrayals, and crises of confidence. There’s Irish writer Ryan, who while happily betrothed (if there is such a thing) has dead-end ambitions — and sees wedlock as a “whole structure [built] on a period of intensity that’s never repeated.” There is Paniotis, a jaded literary friend — “the human capacity for self-delusion is apparently infinite…” — who in turn introduces her to a similarly jaded Greek lesbian writer named Angeliki. There are also the various students in Faye’s class, each one bright, each one vaguely afflicted.

Cusk’s anti-novel is an amalgam of intelligently conveyed injuries and life observations. It is a scar-loving and occasionally man-hating confection that is unafraid to advertise ruthless suspicions of marital motives (particularly male motive). That Cusk has spent hundreds of nonfiction pages chronicling motherhood and (later) divorce is no coincidence. She’s determined to get to “the story of ourselves,” creating a lamenting Greek chorus to get there. She is part of that chorus and never strays far from Paniotis’ notion that the idea of improvement “has commandeered our deepest sense of reality” and “even infected the novel.” Story-telling “as a progression,” he says, reminds him of a story he read about a mad boy “climbing trees in order to fall out of them.”

This, then, is an exercise in downward flights, whose relationship with “absolute pessimism” (Paniotis again) sweeps away not one but many marriages. Faye, like Cusk, is “overcome with sadness.” Faye, like Cusk, is determined to lead a life “as unmarked by self-will as possible,” convinced “what other people thought [is] no longer of any help to me.” Cusk, like Faye, is all about leaving structure behind.

Only at the end does Faye briefly meet an alter ego of sorts, the playwright Anne. Anne’s martial breakdown taught her something about herself, she announces, but in the negative. Her self-view, like that of Faye, is as an “anti-description,” “a reverse kind of exposition,” “a shape,” “an outline.”

If only the outline didn’t contain so much simmering anger. One of Faye’s students speaks of the “disgust that exists indelibly between men and women,” present tense noted. Yet if all is so bleakly “anti-,” so in need of relief from the many betrayals of (literary and marital) structure, who is left to hope, let alone inspire? Cusk borrows wholesale from Stephen Crane’s short poem “In the Desert,” with Faye loyally eating from her own heart: “Because it is bitter, and because it is my heart.”