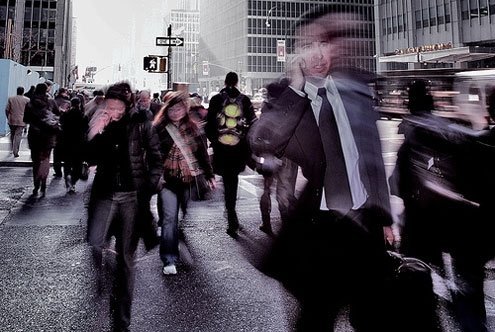 ’ve always seemed slow to adapt to trendy technology, to cell phones and iPads and laptops, a quirk that dates back to my middle school years in the late 1990s.

Some of the girls in my seventh grade class had private phone lines so they could be reached personally. These were the same girls who brought lunchtime crackers with tabouli and olive tapenade and wore Burberry jackets.

“Do you want a phone line, too?” my mother asked me, quizzically flipping through the school directory. I couldn’t imagine the point: Even if I did have one, who would call me? No, I told her, I could do without.

Cell phones came into style shortly thereafter, the flip phone being in the most demand. When I missed the bus I’d have to ask to borrow someone’s phone to call home. It was a heavy oval of silver that snapped open and shut like a hippo’s mouth. I eventually got one as a gift on my 17th birthday – my parents figured it was time I had my own.

It had been a cold winter and snowy roads meant late bus arrivals. Once the ice thawed and spring began, I rarely used it. Once, before a long plane trip to Italy, my grandparents gave me an iPod. At first I didn’t see the point but it later helped distract me from nerve-wracking college interviews and kept me from thinking too much about how my identical twin sister had started dating while I had not. My little blue iPod nestled into my jeans pockets, headphones snaking up into my ears. I listened to it while washing dishes or walking my dog or watering the flowers, and even when using the hairdryer. I was devastated, maybe even teary, when I accidentally broke it — it got lodged in a car door and was crushed. I was a little lonely after, but decided not to buy another. I worried for my hearing.

Since then, I’ve fallen behind on trends and apps and Twitter. Some conversations I overhear from time to time perplex me. “I got my son his own iPad for his sixth birthday,” I heard a mother comment the other day. “He was always using ours, so I decided it was time he get his own.” An acquaintance once told me she’d given her toddler granddaughter a book and that the baby had burst into tears as she furiously swiped her tiny hand over its cover, shocked it wouldn’t move like that of a digital tablet. A few weeks ago I had dinner with children all under age 13. One played “Angry Birds” on his phone while another posted on Tumblr with headphones in. The third talked a bit, but mostly about videos she’d seen lately on Youtube.

Eventually, we got on the subject of summer camp, a classic American experience. “I hated camp when I was your age,” I remarked as I passed the salad. “Why?” said one, eyes woeful and full of sympathy, “was the wifi really bad?”

I’m not quite sure why, but all this makes me a bit melancholy. I wonder if my kids will ever know the thrill of holding a real book in their hands, or feel its friendly weight in their backpack, chapters ready to be devoured under covers with a flashlight at night. I wonder if libraries will become extinct, or if people will forget what it’s like to make conversation.

I’ve noticed that Rome’s sunsets and views of can no longer be simply enjoyed, but need to be photographed and filtered. I shudder to think of what my tween years would have been like with Twitter. Having said all this, I do have to admit that I capitulated recently and brought a Samsung smartphone. While I like it, I’ve noticed I’ve stopped skimming the newspaper on my daily commute, instead mindlessly scrolling through Facebook. When the battery runs out I sometimes change my plans of grocery shopping to run home and retrieve my charger. If I forget my phone, I find myself constantly reaching for it, an embarrassing tick.

Recently, my phone died on my 40-minute metro ride. I decided to people watch instead. I found myself staring at rows of passengers, all fixated on their phones. I sighed — I should’ve thought to bring a book.