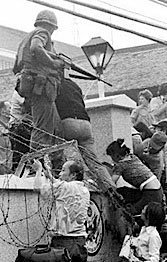 Peace with honor: The U.S. Embassy under siege in Saigon, 1975
I

’ve nailed the problem in Iraq. There is none. I’ll elaborate. What’s a Sunni? What’s a Shiite?Do you know, do you care?

Maybe you did once, but that was pre-shock, pre-awe, before reading exhaustive accounts about races and religions you’d never heard of and had no interest in but felt compelled to face down because suicidal scoundrels knocked down two skyscrapers in New York City and took out a piece of the Pentagon.

Yes, once upon a time you paid close attention. You felt like an patriot, vigilant and insecure. You watched dark men and imagined them as enemies. Maybe you alerted authorities. You memorized anthrax symptoms. You bought a gas mask.

Let me elaborate, Are you white? Are you black? Make a decent income? Middle class?

If so, press yes. If so, Iraq is old news. Osama is so 2001. Tabloid Saddam in his underwear? Pathetic.

Your kids are not headed to war and your paycheck is heavy on zeros. Buy a Beamer, buy a house, pay off a loan. Power-pointers complain more than they suffer. So do liberals. The Wall Street Journal is having a field day.

Question: If someone asks you, “What’s the biggest hassle in the world today?” what do you answer?

Iraq? No way. Talk to me about private school tuition or retirement or implants gone wrong.

They had elections. Huge turnout. Even generals and liberals applauded. Euphoria got a workout.

Elections are a mesmerizing placebo, hypoallergenic remission from the boils of war.

People voted; it’s their country now. Sure it’s still a sick one, a Middle East version of the 1880 Dakotas, but we did what we had to do.

What’s a Sunni? What’s a Shiite?

Wrong question: Who’s hot, who’s not? And drop the torture thing. Old news. Our bad apples were smacked into the brig.

Weary reporters want out of the dust-bowel; and editors know the story isn’t sticking. Now, it’s Michael Jackson, a Latino mayor in Los Angeles and theories that the Big Bang might have sounded more like a lugubrious whir. There’s also download-able patter about the origin of female orgasms.

Partial pullout (no pun intended) has been introduced, albeit gingerly — but tell me you haven’t thought it. Vietnam eventually wretched out its Americans. Helicopters fleeing the abandoned U.S. Embassy in Saigon dropped what they couldn’t carry. Richard Nixon called this peace with honor.

Honor in Iraq? Not likely. Try invading all Ireland and gluing it back together. What’s Protestant? What’s Catholic? Who’s on “your” side?

I know the problem in Iraq. The occupiers make the jargon for the occupied. Prime ministers, councils, insurgency, security, democracy: simplifications to please a more affluent world uncomfortable with acknowledging that it remains unpopular among those it wishes to help.

Bellicose language doesn’t help. When I ask my new banker her title she explains she belongs to the bank’s the “Centralized Problem Escalation Team.” No, I don’t ask.

I do wonder how such post-modern American titles reconcile with the ugly demands of global caring? Satire helps.

Wilma Rubble of The Flinstones used a garbage disposal that was really a pig under the sink. America can be that way: excited, arrogant, eager to help, confused, self-assured, parochial and clumsy — in 10-part harmony.

I know the problem.

So does my United Nations friend, who extends its despairing range.

She sees ill-fated trucks, one of thousands, bearing food to the spoiled side of the world. She’s seen shipments slouching toward Eritrea, Iraq, Afghanistan. When the truck nears its destination whimsy kicks in: Bad roadmap or pernicious karma. The food is sidetracked or rots; avaricious drivers sell it to bandits for dollars; peacekeepers back away, fearing awkward involvement. No manifest records the mishaps.

Death in Iraq. Poppy crops in Afghanistan. Kidnapping on a lark. Status quo ante in spades. True, the nationality of the observing troops has been changed; they no longer work for tyrants or Taliban frighteners. But do they protect the innocent and feed the hungry?

The problem is that there is no problem, because chaos disdains empirical balms.

Hell hath no fury like immolated skyscrapers avenged. Thy kingdom come, thy will be done. After which the avengers get their hat, and coat, and starting dreaming to leave.