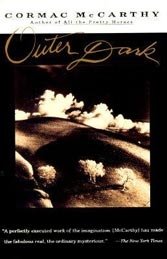 McCarthy’s second novel is an advance on decades of rural rawness deprived of anything commonplace but blessed with a separate but equal language that puts crudely vibrating flesh on “an embryonic bird’s first fissured vision of the world.” In such a world, it matters less what McCarthy’s characters do — a sister tracking down a baby she had by her brother, who is in turn tracking her — than how they speak and what they see along their damned way. McCarthy’s omniscience is Martian. Place is a “landscape of the damned” sick with “attitudes of agony.” His word-paintings are allegories in the style of Hieronymus Bosch, whose gardens of delight were in fact harvested nightmares.

On the dermis of this story are conductors Culla and Rinthy Holme, teen brother and sister, “toilers in a dream,” illiterate outland creatures of no known God, linked by the incest baby that an enraged Culla tries to make disappear but that Rinthy will try to find, with on-the-lam Culla circling in the background. In the foreground are countless odd denizens, vagabonds and vampiric killers parsed into a West Virginia of the mind, a McCarthy Twilight Zone endowed with half-human “anthropoids” who go about their daily business in a way only he knows to describe, witness Rinthy meeting a woman and observing her as one would an alien: “In one hand a hoe handled crudely with a sampling stave, an aged face and erupting from beneath some kind of hat lank hair all hung with clots like a sheep’s scut, stumbling along in huge brogans and overalls.”

Such a woman, for Rinthy, is brief shelter from a larger Calvinist storm. In the “outer dark,” commas are rare and dialogue governed by the roving rules of phonetic speech. If Kafka’s labyrinth is urban, McCarthy’s is tribal American, its inhabitants “gracelorn” but forever on the prowl.