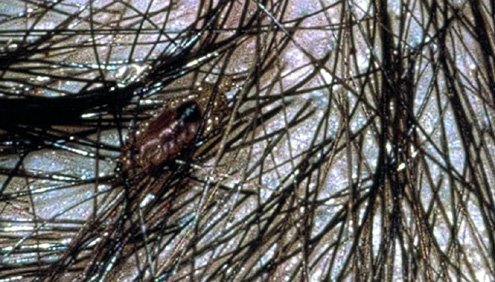 ome of my favorite friends arrived to stay last week and I was frantic, as I knew we wouldn’t see much of them, between work, school and rehearsals for end of term shows and concerts which plague us at this time of year. “Don’t worry,” said my wonderfully pragmatic friend. “You can just tell the school that your children have a bad case of head lice.” I replied that everyone in Spoleto had head lice, so that excuse would never work.

She thought I was joking, but sadly I wasn’t. Everyone really does have head lice in Spoleto and not a week goes by without one of the children coming home from school with a letter warning about a fresh outbreak. But the embarrassing truth is that until very recently, so did we.

I carried the dark secret with me for a little over a year as first my son, then my two daughters and then — eek — I too started itching. Naturally, I swore everyone to secrecy on pain of death as I researched the best way of getting rid of the critters, under cover of anonymity of course. I soon realized I was not alone.

On the Internet, a whole community was busy exchanging tips on how to send the beastly things packing. One mother described how she smothered her daughter’s hair with a nit-repellent concoction every day the child came home from school before immediately boil-washing all her clothes, towels and bedding, a process that she said took at least three hours. Hardly reassuring as the unfortunate girl still had lice after ten years.

Another parent swore that the only way to be done with the bugs was to smear a jar of mayonnaise on your hair, don a shower cap and sleep the night with the gooey mess on your head. My own doctor was next to useless. “You could try shaving their heads,” he said unhelpfully. My hairdresser wasn’t much better. “You could dye their hair. That usually kills them,” he said. “On the other hand, it sometimes doesn’t.”

At my lowest ebb, I confess that I did eye the Hellmans in the fridge, but in the end I couldn’t go through with it. But much to my children’s chagrin, I tried every other remedy that I could lay my hands on. I bought so many chemicals that my son’s scalp started to bleed. I clandestinely imported sure-fire treatments from all over the world to protect my guilty secret.

Hundreds of euros later, everyone was still scratching. I barred them from doing it in public, though I began instinctively scanning my children’s heads, even when I didn’t realize it. “Mummy, you’re staring at my head again,” my older daughter muttered on more than one occasion when my gaze drifted subconsciously to her scalp in front of her school friends.

Then, one day, it dawned on me. Everyone else had them as well, and just like me, everyone was trying to keep it quiet. The penny finally dropped when one of my younger daughter’s friends came to stay. As I patted her on the head and took her hand after school I saw — with horror as by then our own unwanted guests had for some inexplicable reason packed their bags and left — that her head was crawling. The bugs were virtually having a disco in her long thick locks. I looked at her mother and remembered that she too had recently had her long hair cut suspiciously short. It hadn’t worked. I could still see the telltale white specks scattered over the top.

Then I remembered the two daughters of another friend, who had had their long tresses lopped off into a short back and sides, along with the mother. “So much cooler for the summer,” she had replied breezily, when I remarked on the sudden change in hairstyles. “Much easier to dry after swimming,” said another mother, whose own girls appeared one day looking like loo brushes. Hmmmm. A likely story.

As I said, our close encounter with the hideous insects ended a few months ago, almost as suddenly as it had started. But not before we once memorably combed no few than 146 of them out of my daughter’s lovely golden tresses and consigned them to a cruel death in a solution of hot water and vinegar. To this day, I’ll never be sure which, if any potion did the trick or if, as my children claim, the bugs just got tired and left. But it will take me a very long time indeed before I can look at any child without inadvertently searching their heads for signs of twitching — or believe their mothers when they tell me why they’ve had their hair cut.