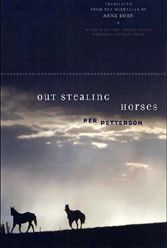 By Per Petterson, translated from the Norwegian by Ann Born

Petterson, a Norwegian, is a gifted pupil in the school of things past. Trond is a 67-year-old widower — his wife died in a car crash — who has exiled himself to rural home hoping to be weaned from time. He is estranged from his daughters, has a dog, an outhouse, and no real friends. The year is 2000. Trond’s day-to-day, in addition to rustic chores, consists in remembering the long-gone summer of 1948, when he last saw his father. By chance, he happens on neighbor Lars, another again dog-keeping outcast. But Lars isn’t just a neighbor, he’s a pivotal figure from that vivid, postwar summer, when secrets had a future (afterwards “everything around me suddenly turned silent.”) Pettersen patiently weaves the strands of a story that dwells on innocence lost, and fathers disappearing with them, both mood and people made to capitulate to complications and male mysteries that boys can’t understand but are shaped by.

Trond’s rural narration is so dispassionate it conceals layers of moral subversion that are cumulatively spellbinding. Dogs, logs, cows, trees, milk, snow — each is an piece of an animated puzzle raked into a life. “If I just concentrate I can walk into memory’s store and find the right shelf with the right film and disappear into it…” says Trond.

Petterson knows the meaning of concentration and always walks to the right shelf. He has written a sad ballad that enriches while not seeking to console, an exercise in meditative melancholia that glows like a night light.