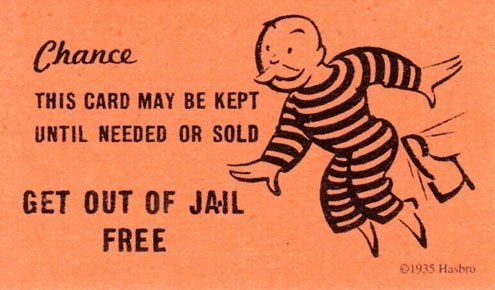 The ace up an American's sleeve.
I

’m among the proud Italian-Americans complimented as seeming 100 percent Italian based on bone structure, breeding (Roman mother and Italian-American father) and buona forchetta (puntarelle, carbonara, saltimbocca are my favorites, but I happily eat everything).

The give-away, I’ve been told, is my cute but “definitely not American” accent, which my cousins take credit for, bragging that they put the shhh in my mi piace. At the same time, whenever I do anything slightly out of the norm, one of them always laughs, ma è Americana… (roughly: “give her a break, she’s American.”)

These three words have been my Monopoly-style Get-Out-of-Jail Free card ever since the 1990s. And I can’t tell you how helpful they have been.

Don’t get me wrong. I love being Italian. I love the speedy EU line and whipping out the carta d’Identità when asked if I’m una straniera. I love celebrating feste and festine. I love being hypercritical about cooking. And I love my nonna‘s hyperbolized explanation of our pedigree “We go back to Giulio Cesare!”

But I also love interpretive dancing, over-the-top flirting, and Bon Jovi quoting. You can take the girl out of Philadelphia, but you can’t the Philadelphia out of the girl.

The Ma è Americana card allows people to accept what can be considered acts of randomness or poor manners, from standing up on a park bench to see over everyone’s head (ma è Americana; per questo lei fa così; “she’s American, they’re weird…”) to an impromptu break dance show on Via del Corso (ma e’ Americana, said my carabinieri friends, who were jealous that of my faux back spin.)

I’ve also found that I can be exempted from eating certain things, in particular crostate (for me, they are too dry to be considered pastries), by simply switching to a more American accent.

When I burnt my bangs off using a flat iron while gabbing on the phone to my cousin, my hairdresser didn’t scold me. He understood that being American means your mind wanders.

The Ma è… card also comes with bonus points – which can give you the feeling that you’re a 21st-century Marco Polo. I brought cupcakes to Rome in the early 1990s to my cousin’s birthday party. I explained to everyone that I invented the concept of cupcakes from scratch. (I repent, Betty Crocker.)

My enriched 1980s background helped me to bring mullets to the female hair population of Italy in the early 2000s. Most recently, I introduced a class of third graders to the robot dance. They think I’m a goddess.

I’m careful not to use this card too often as it is very important maintain the effectiveness of both citizenships I have. Yes, I also carry a Oh yeah, she’s also an Italian tessera for use in non-Italian venues.