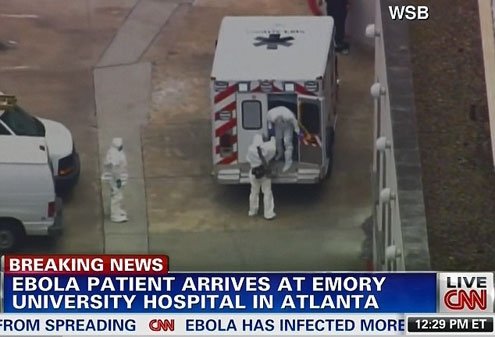 Cable TV, newspapers and the web have become glad fear-mongerers.
I

n the chaotic phase that followed the September 11 terrorist attacks, the medium became the message, and the message was almost inevitably impregnated with hysterical worry about alien agents planning daily for the apocalypse. Now, 13 years later, similar fears are being lavished on a plague allegedly ready to relocate from the remote non-West to the heartland of an affluent superpower ostensibly beyond such primitive contamination.

The locus of assembly line fear is cable television and the Internet, by now the established twin-towers of “informed” speculation. The twins crave what works: the transmission of anxiety

This, then, is what enlightened freedom of thought and the democracy of its exercising has gotten us: an information flow so polluted by tabloid-ism and hyperbole that reasonableness regularly capitulates to dread.

News is transfused into contrived concern that unsettles through repetition so that the final result is a constant rehashing of the menace of the moment. The less overt the adversary (invisible is ideal), the greater the medium’s ability to portray scenarios ideally suited to personal paranoia. The unfamiliar gave Islamic terrorism its early boost. The enemy wore no stripes. Perceived friends might be enemies. The unfamiliar is now giving the Ebola virus a chance to disembark on U.S. soil not just as a dangerous disease in need of containment but also as a life-busting menace whose early mishandling makes it ripe for partisan warfare.

Make no mistake: Ebola is a terrifying virus. Writers and researchers knocked on its nasty door decades ago when AIDS was still the malady of record. In his 1994 book “The Hot Zone,” Richard Preston outlined a potential risk that has since turned real. “A hot virus from the rainforest lives within a twenty-four-hour plane fight from every city on earth. All the earth’s cities are connected by air routes. The web is a network. Once the virus hits the net, it can shoot anywhere in a day — Paris, Tokyo, New York, Los Angeles, wherever planes fly.” Preston’s book, though focused on the Marburg and Ebola viruses, was in fact an effort to ride the AIDS coattails (“Ebola does in 10 days what it takes AIDS 10 years to accomplish.”)

But as the public learned to understand and live with AIDS, and fight it, Preston’s best-selling words lost their sheen. The medium had no need to pursue it further. Outbreaks continued cropping up but in places of little interest to the American medium’s assembly line. Until now, there was no nearness to dwell on; no Texas nurses at risk; no Liberia-sickened dead man; no space suits pictured close up.

Shielded from much of the world’s bad news by two giant oceans, the U.S. saw Ebola in the same way it did the waves of terrorism that hit Europe in the 1970s and 1980s — in passing. These were distant problems. And borrowing fear is no match for home front worries.

The conferees of the original act, dumbfounded by the ripple effects of their success, did their best to keep the urban menace alive, with attacks in London and Madrid. These days ISIS and its attention-grabbing beheadings keep the coffee brewing.

In the end, terrorism proved to be less the sum of an axis than a theatrical road show of actors eager to get into the dread game.

Preston ended his book (almost apologetically) by admitting the disease “had receded into the forest,” but doggedly insisted, “It will be back.”

Again: Terrorism is real; it always has been. Threats are not trivial.

Ebola is real. It always has been. It is nothing to trifle with.

Something else that isn’t trivial and shouldn’t be trifled with is the human need to forage for (and fall for) humbling fears. This amplified craving of misfortune, like waiting for accident at an auto race, consistently imperils both reason and context, each one a treasured enlightenment value.

The medium long ago recognized the public craving to fret. It dwelled on suicides after the 1929 New York stock market crash and gradually constructed human-interest stories to accompany unfolding tragedies. It soon grew shameless enough to poke microphones into the faces of the sobbing.

Since 9/11, however, the instinct has entered a new and troubling phase. Unfolding situations are imbued with pre-tragic leanings and then allowed to played out as doomsday soap opera. These shows create “be very afraid” brinks from which an enthralled public can later exult at having retreated from, unaware at the ease with which panic seized them.

Fear is now a commodity or a spell for near-casual hire. And scary incantations are the ones most in demand. Apprehension is a latent virus the assembly line occasionally gets the tools to embroider. This is one of those times.

So it is that Ebola, out of Africa, gets its 15 minutes, which in frightened minds can produce a separate but equal infection.