Our kid in Moscow 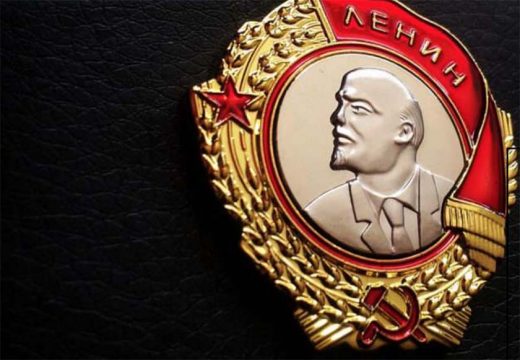 The Order of Lenin was the Soviet Union's highest honor.
O

nly those who will risk going too far can possibly find out how far one can go.  •

I am sometimes asked how and why I took to roads less traveled. When I was 17, just before enrolling in college, I spent the summer on a hitchhiking marathon through the United States. To be honest, both the country and the people were less impressive than I expected. But I remained captivated by the idea of movement — of traveling freely, speaking to strangers along the way.

The next summer, I decided to head for Europe, which was still very much Cold War territory.

To my mind at least, Europe included the Soviet Union, which, as a result of its World War II advances, controlled countires from Poland to Yugoslavia. In 1976, the USSR — the Union of Soviet Socialist Republics —required travelers to register with Intourist, the country’s only (and government-run) travel service. Only through the regimented Intourist could you organize a Soviet trip.

I recall nervously sending my passport to the Soviet Embassy in Washington, a necessary step to obtaining a visa.

All went well, and with $800 for 16 weeks of travel, I was off to the land then ruled by Leonid Brezhnev. Two months into my trip, I flew from Copenhagen to what was then Leningrad (now St. Petersburg). I then took a train to Novgorod — birthplace of Soviet writer Maxim Gorky — and later to Moscow. Itineraries were set up ahead of time and Intourist guides constantly supervised our group.

Again, all went smoothly. Two weeks later, I was set to fly back to Leningrad to catch my plane back to Copenhagen.

Your final day in a country is always the best time to get black market goods. That way, you avoid carrying around contraband for the duration of your trip.

During my Russian travels, I had met two English guys, Peter and Paul (hard names to forget). We’d all read about how to approach the Russian black market. Our trading currency was new Levi’s Jeans, the tags still attached. Levi’s, like U.S. dollars, were precious in Soviet Russia.

Your final day in a country is always the best time to get black market goods.

The spotters would get the message and approach us. That, at least, was our master plan.

Intourist expected all travelers to show up for the rigid schedule of events and excursions that they had planned. Still, we found enough free time each day to take the Moscow subway to prospective black market districts. The first two days of prowling around were a bust. On our third attempt, five days before our departure, we decided to take a walk around the Lubianka Building, which, in those days, hosted the KGB’s interrogation center and prison headquarters. (It now houses the KGB’s successor, the FSB – Russia’s Federal Security Service.) The old joke was that Lubianka, though just a few stories tall, was the tallest building in the USSR because from there you could see all the way to gulags of Siberia.

And Lubianka, shockingly, was where we were approached.

He was a young man, maybe just a teenager; he wore a shiny pair of jeans and a thin, tattered black coat. He looked like he’d yet to start shaving. He said nothing, never gave his name, but nodded to us to follow him. Naïve, off we went.

Later, the boy would tell us the area around Lubianka was a black market hive because the KGB couldn’t imagine something so audacious. Call it hubris.

I bolted, repeatedly slamming my shoulders into the thin birch trees.

We struck a deal and agreed to meet the morning of our departure in a wooded area outside Moscow.

Our group was staying at a seedy brick hotel called the Hotel Moskva, near the end of a subway line just outside the city center. The white-birch woods where we’d agreed to meet was a 20-minute walk from us. Only after, did I understand why the black marketeers had chosen the spot.

Peter, Paul, and I packed early; the airport bus was set to leave the hotel at noon. We walked to the woods at 8 a.m., wandering around, Levi’s in hand, as instructed.

We did this for nearly an hour but no one showed. Abut no one showed. About to give up, we heard someone whistling, and following the sound we found the boy. He led us to a small clearing where he and the two companions who had come with him could show off the goods they’d gotten to meet their end of the bargain.

Peter and Paul had wanted a Soviet general’s uniform, if possible from World War II. And there it lay, as if fresh from the dry cleaner, the buttons gleaming. With it were shining black boots, with pants, shirt, jacket, and coat. I was impressed.

I’d asked for something simpler: an Order of Lenin Medal, the highest Soviet military honor. It might be harder to get, but it was certainly easier to carry, and there it was in front of me.

We made the exchange, with the medal costing two pairs of jean,s and the general’s uniform, four.

As I cradled the heavy medal, I heard a dog bark behind us. We turned and saw the dog, two uniformed Moscow policemen, and a third man in a suit, no doubt KGB.

Soviet military regalia was once a sight to behold.

Yet when I say “saw”, I mean barely saw, and that was the genius of the boy’s plan. The trees were so dense it was nigh on impossible to see through them, let alone run between them. When we looked back for the boy and his two friends, they were gone.

By then the medal was in my pocket and I bolted, repeatedly slamming my shoulders into the thin birch trees, but never once looking back for Peter and Paul. They’d apparently scrambled to retrieve the uniform and trimmings.

I broke from the woods about a hundred yards from the subway, rushing to board a train headed away from the hotel. In five or six stops, I got out and reversed my field. I kept looking around nervously, all the while trying to behave like just another commuter.

I made it to the airport bus, but immediately noticed that our Intourist organizers were furious: they were missing two people, Peter and Paul.

At the time, Moscow’s airport had no security to speak of. Guards searched luggage manually. To this day, I don’t know if such a search was typical or if they’d been tipped off about possible contraband.

Then, fate intervened. Some ten passengers had been searched before me, and time was ticking away; our plane was due to leave any minute. They waved the rest of us forward, and so I escaped the search.

I never saw Peter or Paul again. I still don’t know what happened to them, since they never boarded the flight.

As our Aeroflot plane took off, an empty vodka bottle rolled down the center aisle past me. I had to smile. Luck had favored me.

But my triumph was short-lived. My prized Order of Lenin Medal was stolen from me in a Luxemburg hostel two weeks later. I’ll never know if the medal was genuine or fake, but that never mattered.

If this is what travel is like, I thought to myself, count me in.