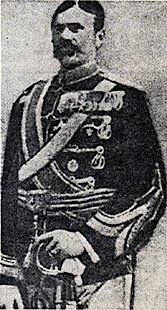 “He posed as Eddine,” said Shasha. “He was crowned King Otto. He came dressed in medals."
T

he aging Albanian lesbians told tales of the Ottoman Empire. This was a long time ago, on the Rome street of the many cafés.

The women composed themselves in the early morning, before the sun took to its zenith and baked the life from July’s molten streets. Though memory plays tricks, the long-ago time was probably 1967. I would have been 13.

The aging lesbians lived in an apartment dedicated to polished lumber: tables, chiseled armoires, ornate chairs, and bookcases. They were mothers of cousins of my own mother’s ex-husband. When their mates died within a year of one another in the forties they sealed a discreetly private union.

Every morning that July they rose early and dressed — whites and blacks and rosé scarves; linen hats with droopy edges — and deposited themselves at an outdoor corner table of the café called The Swan. The street of the many cafés had six, each with a distinct clientele. The Swan attracted postwar émigrés, women mostly, and the boisterous waiters memorized vanities and flattered incessantly. “Belle signore, buongiorno a voi!” — “Beautiful Ladies, good day to you!”

The aging lesbians were 84 and 88. Or so my mother announced.

“This is not true,” rasped the one called Shasha, tickling my forearm with her claws. She spoke in Italian. “We are each of 100 years! Of one hundred years long!”

My mother objected. Women should never disclose their age.

Shasha ignored her and lit up a Camel. She gargled in smoke. “I will tell you now of the first Pasha I knew,” she began, expelling thick puffs. “He took me with him and he gave me gold rings. He had other women but I was preferred. This is how it was. He sent his carriage for me always. The Pasha always wanted many things from a women but he was always polite.”

The Pasha was an Ottoman vassal, a proconsul of the Sultan given decision-making powers over outlying territories, including Albania. The tyrant Ali Pasha once entertained Dryden. Dumas even wove him into the “Count of Montecristo.”

These were hedonists in regalia posing as men.

Next came the turn of Shasha’s partner Beyre. Usually taciturn, she liked me.

“That world was another world,” she murmurred. “When I was a girl I could only go to the window to see the streets. I could not go out except with my mother. We had ‘callers,’ gentlemen who would visit, always well dressed, and we would be introduced to them briefly. But we could not speak unless we were given permission, so we had to stifle laughter when some of the sillier men were there.”

Time passed before I understood that Shasha and Beyre were describing life in a Tirana harem in pre-turn-of-the-(20th) century Albania, a place of dilettantes and magicians: marshals with batons but no armies, mustachioed poets and writers indulging the lazy affect of local Romanticism. Women were necessary to their indolent emotionalism. I heard great stories.

My mistake, in retrospect, was listening but not transcribing. Within a decade, Shasha and Beyre had vanished. The Swan was remodeled, with new-age Italian customers — dapper men in brassy lapels and women in sequins — ousting the émigré old guard. No more garrulous morning chatter interrupted by slumber (in pajamas) from 2 to 4, followed by a revival of debate in the late afternoon.

“Let me tell you this, young man,” said Beyre, pulling me aside, away from my mother’s busy ears. “The women are now emancipated, as you say, but the men, then, were at our mercy. They did as we said. They vied for us. They had no choice but to demonstrate their elegance, their wealth, and their status. How else were we to know what we could expect? Now, the women say they are ‘free’. This is freedom, yes, but the men are also free to escape. You cannot have an elegant man without discipline and rules. Remove the need for elegance and you have the men you have now — who care nothing about how they will be seen; these are men without standards because they need none.”

The last story I remember — Shasha, smiling mischievously, was the speaker — concerned Otto the lion-tamer. After Albania broke from the Ottoman Empire in 1913, Muslims sought an appropriate interim ruler. But Halim Eddine, a prince and a kin to the Sultan, was nowhere to be found.

Witte, an eccentric German, plied the Balkans with his circus troupe: lions, tigers, and bears. He also had an uncanny resemblance to Halim Eddine.

“He posed as Eddine,” said Shasha. “He was crowned King Otto. He came dressed in medals. He sent false telegrams. The military believed him. He received a harem. Crowned! Can you imagine? And he was a man of the circus. A lion-tamer. A magician impersonating a king! He gave away gold! People were taken in.”

The sword-swallowing huckster ruled Albania for five days as Otto I. He died a pauper in 1958.

“Cirrhosis of the liver,” said Beyre. “At an old people’s home in Hamburg. And he still called himself king. He took us all for fools! But he would have been better than the communists.”

As the tale of Otto tale wound down, July’s heat awoke. The aging Albanian lesbians gathered themselves, Shasha with her cane, Beyre holding down her linen hat, and trekked slowly back to the acres of venerable wood that protected them until 1974, when they died six months apart. In July.