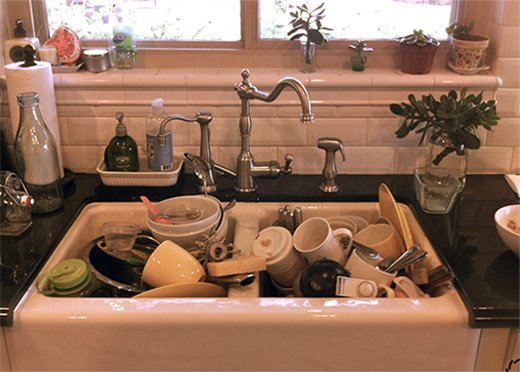 Oh wait… maybe I can do them faster in a smaller sink.
C

an you live with other people’s messes? It’s a question I’ve pondered with my husband, usually after being at the home of a couple in which one of the two is a certified slob. We’ve never come up with an answer, but that’s probably because we’re neat freaks — as in, “Who’ll get to that wine stain first…” But the question is out there, big-time, and tolerance levels vary.

Q: My husband is a slob. Caveat emptor: I bought him that way, exchanged vows with him knowing all about rancid socks. But at the time of those vows (four years ago; we were both 27) I somehow assumed our “official” co-habitation, now kid-inclusive, would mitigate the mess. Since a kid is a mess, a husband wouldn’t figure into it, right? Wrong. He’s worse than our two-year-old (never mind the dog, who’s actually pretty restrained). To my husband, projectile vomiting and its delicious aromas allows him to let loose all manner of smells of his own. After all, if the kid’s a mess, and stinks, why can’t he follow suit? Once upon a time, as a favor to me, he made the bed. Gone. Once upon a time, another favor, he didn’t leave empty shampoo bottles on the shower floor. Once, in a galaxy far, far away, he even washed and rinsed the plates and put them in the washer. But our two-year-old doesn’t do dishwashers, so, again, why should he?

Once upon a time, as a favor to me, he made the bed. Gone. Once upon a time, another favor, he didn’t leave empty shampoo bottles on the shower floor. Once, in a galaxy far, far away, he even washed and rinsed the plates and put them in the washer.

I know what you’re thinking: once a slob, always a slob, so what do you expect, or, people don’t change. Fine. But doesn’t a marriage also induce respect, or sharpen it when you can tell your partner has her (messy) hands full? I admit that until our son was born I was too busy at work to notice, or want to notice, our home life.

Now, though, I have no choice, and one of these days I’ll send him to a motel and let them deal with him. Maybe he’ll elope with the cleaning lady, until she gets wind of his real self.

A: Motel therapy sounds cathartic but it won’t help with home life. You can’t live with a wild-child kid and a husband who riffs off his behavior. You may not like confrontation, but this is a situation when it’s critical. Like a reality check. Does he or does he not want to be a father and a husband? If so, he must mend his ways, fast, and start by doing chores you set down. If babies need housetraining, so do some messy people. They need a checklist imposed on them as if they’d joined the military, found themselves at boot camp, with you as the drill instructor. Amazingly, some people crave discipline. They may balk at first and tell you that’s not the way they “do things,” but in the end, the order-giving process stands a good chance of working. In that sense, it’s up to you to reinvent your household, and with it, him. Making light-hearted jokes to friends (“My husband is worse than my kid…”) gets you exactly nowhere.

Bottom line, you’ll never wipe away the slob side. People become who they are early, and it usually sticks. But you’re a couple, a married couple, and marriage comes with going against some ingrained tendencies, and sloppiness is one of them. If that doesn’t work, I have plenty of cheap places on speed dial.