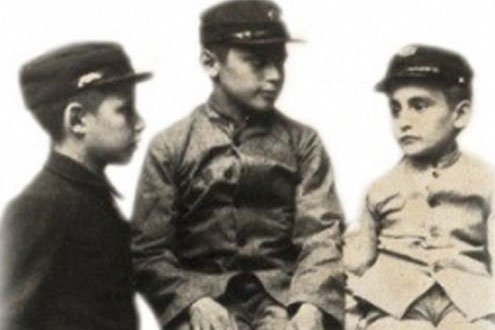 Martinitt ("little Martins") took boys between seven and 10.
I

am inside Milan’s Martinitt e Stelline museum on the city’s Corso Magenta. It opened in 2009 and chronicles the hardships faced by orphan boys and girls before progressive reforms. The stories it tells are humbling.

In 1528, Gerolamo Emiliani, later the patron saint of orphans, donated his wealth to create a boys’ home in near the Church of San Martino in Milan. Two centuries later, Milan Archibishop Federico Borromeo founded the “Le Stelline” girls’ orphanage.

In the 19th century, orphans were mostly adrift. The urban citizenry was poor and lived amid filth and disease. Children were shoe shiners, woodchoppers, stonebreakers and chair makers. They peddled bread, flowers, coal, fruit and milk on city streets.

The name Martinitt (little Martins) refers to the Church of San Martino, which once stood on the corner of Via Manzoni and Via Morone, while Stelline comes from Benedictine convent, Santa Maria della Stella. Over the centuries, the word stelline (little stars) has become a Milanese term of endearment for any young girl. It was what my father-in-law called my daughter.

Though the orphanages were tasked with preparing their children for a better life, they were both in a sense elite. Unlike the thousands of anonymous infants abandoned annually at Milan’s foundling hospital, Santa Caterina a la Ruota, these children were admitted between age seven and 10 and came recommended by a legal guardian or parish priest.

Their lives were strictly regulated. In the refectory, with its long Oliver Twist-style tables, children followed a carefully prepared diet, learned table manners and took turns with kitchen duty. They followed rules for twice-yearly confession and attending Mass. They were urged to discipline and honesty but discouraged from too much prayer. A director issued regular reports on both their behavior and scholastic progress. Children with unsatisfactory report cards were expelled.

Orphans were taught to read and write Italian and forbidden to speak dialect. Martinitt boys wore white uniforms and flat little hats. They learned mathematics, geometry, history, geography and physics. They studied the workings of a constitutional monarchy. The orphanage had a music school with a 42-piece marching band.

“Graduates” became craftsmen — carpenters, engravers, goldsmiths, printers, blacksmiths, clockmakers and chemists. After learning the basics in workshops, they were apprenticed outside. Many became prominent in their fields, including Leonardo Del Vecchio of the Luxottica group, publisher Angelo Rizzoli, bicycle manufacturer Edoardo Bianchi.

The Stelline girls were trained to seek marriage and bear children, or to become maids in rich Milan households. They were taught first aid and how to cook and care for children. They learned skills such as sewing, embroidery and accessory making. Teaching was another option, though women teachers were paid less than men and were frowned upon. The goal was to enable every woman, even if unmarried, to support herself with honest work — then a progressive idea. Several Stelline orphanage directors were prominent socialists who championed women’s rights

Museum visitors can pretend-iron virtual dresses, shirts and trousers at a large table with six irons. In another room, representing a library, they can page through virtual books. “La Bambina Italiana” (“The Italian Girl”) by Felicita Morandi contains advice to teachers for promoting patience, sweetness and diligence. It cautions against giving “virgin intellects” too much too soon. It lists one-syllable vocabulary words, then two-syllable words, then three. It asks, “What is the defect against modesty? What is a girl called who has this defect?”

The museum dedicates two rooms to the wealthy benefactors whose gifts sustained these institutions and whose stories appear on monitors. There are recordings of actors reading letters, digital photos of documents, and sound effects of children’s voices.

But there is not one real cap or shoe, not a single pen-and-ink progress report. What I’ve seen in these sterile, renovated halls seems strange and artificial. On my way out, I pick up two black-and-white picture postcards. Suddenly, the past comes to life.

One shows a room as long as a train station, nothing like the cozy virtual schoolroom upstairs. It’s so crowded that it’s impossible to count heads, but there are from 70-to-100 white-apron-clad young women, intently sewing. Some use treadle sewing machines (which girls bought with their earnings). Others use needle, thread and fabric. Light pours in through gauzy white drapery.

Not one mouth is open. Not one face gazes out a window or smiles at a companion. As a teacher, I imagine the discipline necessary to produce the conditions in that room, and the responsibility the instructors must have felt to turn out patient, sweet and diligent examples of a Stelline education, worthy of the charity bestowed by Milan’s philanthropists.

The second photo shows 30 little boys, maybe newly-arrived seven-year-olds. They are lined up three rows deep. Their heads have been shaved. They wear the Martinitt work uniform: buttoned up jacket, knickers and homemade socks big enough to fit for another year or two. Their backs straight as they stare into the camera. But one little boy has rested his hands on the shoulders of his friend. Several others are trying not to laugh. It’s impossible not to smile back.