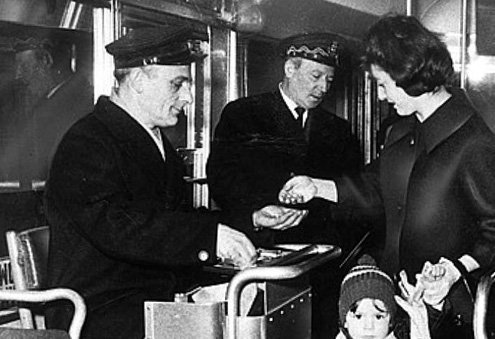 The era of the conductor, replaced by ticket machines.
I

bought my first pair of Italian shoes from a family-owned store on Rome’s Via della Vite, a narrow street behind the bustling main post office. Buses were green then. So were taxis, soon to turn yellow. Bus fare was 50 lire, on a slip of paper issued by a conductor seated in the back. Cabs began at 100 lire. A main pasta course — a carbonara, say — rarely cost more than 500 lire. One dollar was worth 600 lire, a rate that remained stable for decades.

To call it another world seems somehow to understate the differences. The city had few air conditioners, seen as a Satanic American contributes to the decline of society and social health. Why cool the air when you could await the breeze instead, at least in summer? Why take the chance of chilling the prone-to-back spasm body? The shoes were black loafers made by a local Italian manufacturer and put me out 4,000 lire, an exorbitant sum. But the shoes were leather, the husband and wife that ran the store pleasant, and, I was terrified of speaking bad Italian, so I agreed to a sale I wasn’t even sure of to avoid the dreaded brutta figura.

Not that I did. My hair was shoulder-length — a noncomformist atrocity — and, worse still, I insisted on wearing my red Boy Scout jacket in winter. Once, when I didn’t have the 50 lire to pay the bus fare but the bus had already left the terminus, the conductor let into me. Not only was I an ungrateful American, he shouted, but also a Communist, a long-haired, red-jacket wearing Leninist with no change — all of which seemed to me a ruinously confused accusation, but he was right: I didn’t have the coin. He ordered me off the bus and I disembarked, sullen. I walked home.

My first Rome apartment was a 200,000 lire a month rental, only 50,000 less than I made at my first job, in a newspaper where the pay came late if at all. One winter the owner claimed she was broke and tried to pay the employees with boxes full of pasta. A strike and near-revolt followed.

A constant in all these years, which soon became decades, was my annual pilgrimage to the family store for shoes. I learned that the essence of Rome was familiarity and human contact. They’d remember the shoes I liked. They knew my size. They — husband and wife — told me tales about the ups and downs of living in madcap Rome.

The other day, while on a rare excursion to the city center, I took a beloved friend to the store hoping she might find some flat walking shoes. It’d been a year since I’d gone. The street bore no resemblance to the days when I “met” it. A few spaces were empty, casualties of a still-tough economy. Others were occupied by mid-sized brands with a multinational presence.

Out front, I saw the sign I’d dreaded for years, “55th-anniversary sale: Everything must go.” And inside, much was already gone.

“I wanted to keep going but I couldn’t,” the owner told me ruefully. “I could manage €3,800 a month, but that contract was from a decade ago. Now they want €15,000. That’s not possible. The city doesn’t help small businesses. We’re dying. A time comes when you need to say, ‘Your time is up… ormai ci siamo.'”

With luck, he said, he’d find a cheaper spot elsewhere in the city, managed by his son, but it wouldn’t be the same. Fifty-five years after the early 1960s, when Italy was beginning to fill with hope and complication, my shoe man was calling it quits. Now, the buses are orange — a silly color — and the cabs white, a neutral one. The euro has replaced the lire. The new Europe should be resplendent, if only it were. I’ve cut my hair, abandoned Lenin (remember him?), though I still have my red Boy Scout jacket. If anyone any longer knew to associate the color with revolt, I might even wear it. But they don’t.