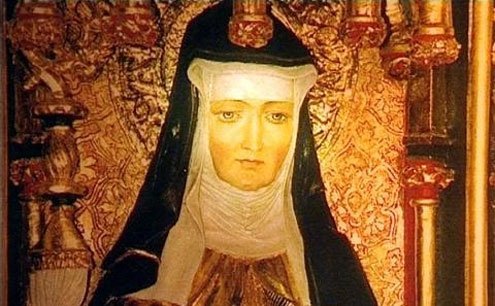 n Holy Thursday before Easter I visited the Certosa di Pavia, one of Italy’s most important late Gothic monuments. I walked through the park and courtyard to enter the cathedral, an ancient and mysterious place of vast echoing spaces and cold stone.

In 1396, Duke of Milan Galeazzo Visconti donated the castle and park, just north of Pavia, to Carthusian monks. They built a magnificent monastery and a church to house the duke’s tomb. A thousand monks lived there. They developed an irrigation system, tilled the land and prayed for their patron’s soul.

I sat in silence with thousands of people and listened to “Ave Generosa” by Hildegard of Bingen. Hildegard (1098-1179), known as “Sybil of the Rhine,” was an anchoress and abbess who lived an ascetic life inside a small room, adjacent to the church of the Benedictine monastery at Disibodenberg. Because Anchorites became dead to the world, the bishop conferred them with last rites before they entered confinement. It was a complete burial ceremony with the Anchor laid out on a bier.

Hildegard’s noble family dedicated her to the church at birth. She was confined all her life. She heard church services and music through a small window. Food was passed through this window and refuse taken out. She spent her days in prayer and contemplation. She composed hymns in the plainchant tradition of a single vocal melodic line and she had visions, that some believe were caused by migraine. She saw the heavens open and a blinding light pour forth. Her visions drew popes and kings and inspired her to write treatises on theology, natural history and about the medicinal uses of plants, animals and stones.

Soon after arriving in Italy, 30 years ago, I stayed overnight in a Sicilian cloister. I met no one except the porter who spoke through a window grate. I learned that none of the nuns had been outside since before World War II. They had looked through a skylight to watch Allied aircraft overheard.

During the night, I lay on a narrow cot in a long room. In the room was the deceased founder’s blackened hand, kept under a glass bowl on an end table. I was continually awakened by bells tinkling and by the sound of weeping that echoed softly along the hallways.

I have played CDs of Hildegard’s music for students from elementary school to university. The verdict is always the same: “Fa dormire.” Hildegard, however, believed that the original joy and beauty of paradise could be experienced through music. Listening to her work for the first time in the Gothic setting made to house it, I began to agree. The music seemed to pour out, like the light in her visions. The intricate, evocative melody took on a life of its own. The solo voice, pure as a child’s, precise in pitch, without vibrato, resonated in the vaults, filling the church with a mood of adoration, alien to modern life.

I left the sanctuary and walked in bright sunlight to the quiet residential corner where my car was parked, near a square concrete house. Beside it, sheets of metal and odd lengths of board formed a shed. A white plastic table and chairs, with an overturned dollhouse, red wagon and tricycle cluttered the driveway. Clear plastic sheeting thrown over curved metal rings served as greenhouses, four of them, set at odd angles in the yard. Marigolds and pansies sprouted among the weeds, beneath a budding apple tree. Clotheslines, stretched between wobbly poles, held men’s work jeans, and an array of socks, discolored bath towels, huge mutandone and what looked like either a hernia belt or an adult diaper holder. On hangers swinging from stair railings, chairs, window latches and the apple tree were various jackets and wool sweaters taking the air.

While I sat in my car munching an apple, a cheery, industrious woman in an apron and house slippers swept the sidewalk, scooped up debris in her palletta and deposited it in a big garbage bag. She pulled weeds along the curb and from sidewalk cracks.

Then she unwound a long hose attached to a spigot near the shed and washed it all down-wrought-iron fence, stone wall, sidewalk, curb and street-scrubbing as she went. I offered to move my car so she could clean the street underneath. She thanked me with a smile of relief.

From my new parking place, I saw her dry the rungs of the wrought iron gate and, with a heavy brush, scrub away any dirt remaining on the wall.

On my way out, I drove slowly to avoid stirring up new dust. Through the open car window, she wished me good day. “Domani passerà la Via Crucis,” she said.

It took centuries to build the Certosa di Pavia. Nowadays no one would begin a project that children and great-great-grandchildren would have to finish. Six hundred years after Duke Galeazzo Visconti donated the land, six monks still live in the monastery, Hildegard’s music is still performed there and a woman washes the street for a Via Crucis procession.