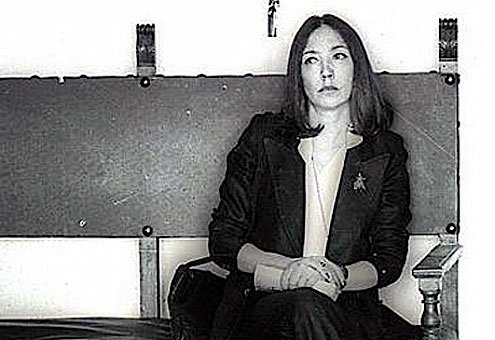 n autumn 1979 my mother asked me to track down Oriana Fallaci to speak at a conference organized by her volunteer nonprofit organization, PIC, which raised money for scholarships to help gifted orphans of Rome prostitutes. Fallaci, a petite brunette who was unabashedly larger-than-life, would be called on to discuss wartime suffering and the plight of refugees. Twice, my mother wrote to Fallaci; twice the letters went unanswered. In an era before mobile phones and emails, home numbers were essential but hard to find. I found Fallaci’s thanks to the press spokesman of the president of the Chamber of Deputies, a Florentine like Fallaci.

I knew her reputation before making the call: curt, cranky, and tough. I also knew she disliked hearing from strangers. Desperate, I begged my mother to pick someone else. She waved me off. Fallaci was the one.

Fallaci, cornered, was shrill. She did not do “such things,” she told me. She did nothing, in fact, unless she was paid. She had no interest in my mother’s organization, my mother, or, for that matter, anyone’s mother. Or any organization. End of call.

Did I excuse her? Yes. Did I like her? Not at all.

As time went on my view of Fallaci deteriorated. To curt and tough I added rude, self-congratulatory, and righteous. Years later, after September 11, when her prose morphed seamlessly into full-blown zealotry, I jotted down bigot — Europe, to her, was “Eurarabia,” London “Londonistan”; “Islam is a malignancy worse than Soviet communism,” she wrote; all Islam, not extremism. (“’They’ haven’t attacked us yet because they needed the staging area, the bridgehead, the advanced headquarters, known as Italy.”)

On and on it went.

“Liberals and laypeople think me a heretic, a witch…”

I’m not sure they did. I am sure she reveled — albeit reclusively — in her pariah/shaman status, happy hostage to the kind of antisocial indulgence that associates greatness with a reluctance to answer the phone. Or to bark into it.

Now, much in keeping with media celebrity tendencies that pervade both sides of the Atlantic, Fallaci is mourned as a notorious bad-girl rock star. Most of the mourners in fact know little about her.

As a crisis-spot journalist for the weekly news magazines Epoca, L’Europeo and the Milan newspaper Corriere della Sera, Fallaci made her name through a punishing series of interviews that included, most notably, Henry Kissinger and Yasser Arafat. Most were conducted in the late 1960s and early 70s. The dismissive Kissinger expected a meek Italian, Arafat a “friend” to the Palestinians; instead, they got a chain-smoking, PR-proof interrogator who posed answer-length questions and refused not to follow up. Kissinger was dumbstruck (he would call the interview his “single most disastrous”), Arafat complained of betrayal.

But the fault was theirs. Both at press conferences and in person, Italian reporters often embellish narrative for drama’s sake. Circumstance is milked for political bias. It’s passionately involved journalism at one level, journalism at the mercy of grudge at another.

When the interviews were assembled into book form — the 1972 “Interview With History” — Fallaci was a global hit. Her irreverent probings were a perfect companion to the stress and dissent of the 1970s. In dismantling the likes of Kissinger, she seemed fearless.

A year later, Fallaci tackled abortion, publishing “Letter to a Child Never Born,” the pro-life ruminations of a haunted womb (Fallaci never gave birth). Typically, it was acclaimed and pilloried.

Fallaci further ornamented her idiosyncrasies in 1979 with “A Man,” a 570-page tome about Alekos Panagoulis, the Greek anti-Fascist who’d been both friend and lover before his suspicious death in a 1976 car accident. She alleged he’d been assassinated by members of the deposed rightist regime. He was a complex misogynist whose verve she adored.

In 1990, came the overbearing “Inshallah,” a novel about the Lebanese civil war in which Western troops are at the mercy of feral guerrillas and Italy’s contingent is forced to withdraw.

When she resurfaced following the September 11 attacks, fleet-minded but ailing (lung cancer), she began a popular, five-year diatribe against Islamic fanaticism. Her first-hand knowledge of Italian fascism (as well as her renegade reputation) inoculated her against responsibility for what amounted to cultural assassination.

Her’s was an old grudge on a fresh dime. Islam was authoritarianism and non-Christian migration its global conspiracy, two pet themes. “No one is a prophet in their own country,” goes a proverb, so she moved. Suddenly, Fallaci was New York’s dour Italian witch, a self-portrait she adopted as a defense against critics.

She embraced the wounded city (its Park Avenue side, at least), and from afar — prophet-style — warned of Europe’s “self-assisted suicide” at hands of quickly copulating darkies. Modern idealism required resisting Muslim conspiracies, she said — a position that after 9/11 seemed less brave (the verb of choice in Italy) than hysterical. Her maddening zeal kept her on the fringes of most realistic political debate. She was also dying.

Say this in her favor: at a time — the 1950s — when Italian women were ostracized from intellectual culture, Fallaci kicked up a storm. She accepted the unfeminine (asexual) brawn that went with playing in Italy’s male sandbox. The toll, over decades, was an awareness of bitterness: more than most, she was exceptionally able to recognize hate and turn it around.

Legacies based on indignation have an alienating flaw: they put hysteria ahead of the critical mind, and of compassion. To which she’d no doubt answer, “I don’t care.”

Which is reason enough, now, to weigh honor against misgiving.