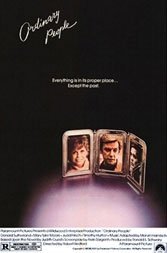 The downbeat aftermath of Watergate and the Vietnam War gave way to a “Will Work for Food” recession, and with it heavy doses of sobriety and guilt, as if little could or should be taken for granted. Dirt was seen to lurk beneath even the most polished fingernails. Out of this mold came Robert Redford’s first and highly assured directing effort, based on the Judith Guest novel.

Conrad “Con” Jarrett (Timothy Hutton) is the troubled son of an affluent Midwestern family that has already lost its first-born, Buck, to a Lake Michigan sailing accident. Con is estranged, aloof, suicidal. His kind but gawky father Cal (Donald Sutherland) is a man of limited vision. Con’s escape is therapist Dr. Berger (Judd Hirsch) — Hirsch tasked with playing an earthy shrink, which he does well (to Con: “Don’t take refuge in one-liners like ‘you’re the doctor.’ Okay? Because that pisses me off.”). Though Con gradually begins to drop his guard, finding a girlfriend, his mental innards remain jagged and raw.

Which brings us to the film’s pearl, Mary Tyler Moore as Beth, Con’s mother, who can’t and won’t forgive herself, her husband, or Con, for the loss of her beloved eldest son. She sees Con’s illness as self-indulgence. Though the film is ostensibly about an alienated boy, it more fundamentally concerns the symptoms and consequences of inconsolable grief. Moore’s Beth is as close to a John Cassavetes character as Hollywood of the time allowed. She is a woman in the presence of besieging men, including her patronizing husband.

The film earned Oscar accolades for Redford (Best Director and Best Film) and Hutton (Best Supporting Actor), but it was and remains MTM’s greatest screen effort. Her simmering, maternal feminism tore the archetype of the Dick Van Dyke housewife to shreds, a vital act of courage in 1979.