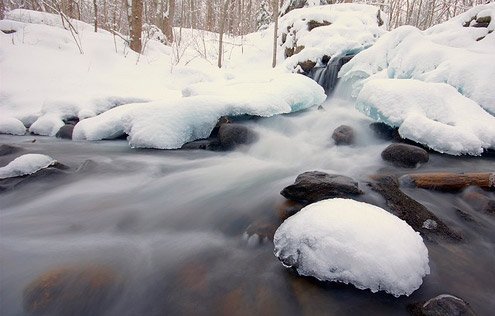 In common? For starters, how about a small town in Maine...
I

’ve always thought that romantic comedies were popular not because we’re eager to suspend our disbelief, but rather hopeful that the same story might just happen to us. Extraordinary things happen daily. What we make of them is another story.

Claire had pretty much lost interest in Internet dating. The people she thought she might like avoided real life meetings. Those she did meet didn’t sparkle. The gleam in their profile pictures was some lucky trick of the light.

When Ari’s profile popped up, it wasn’t his face that caught her eye, but rather his location: Liberty, Maine. It was the same village where her father’s side of the family had relocated. Aunts, uncles and cousins, all tired of their respective city lives, had picked up and moved to the Maine countryside. They had winterized the lake house and revived the village’s general store along with a handful of volunteers. There couldn’t have been more than 100 people living there. Apparently he was one of them.

This was the first of a series of wild coincidences. She read the rest of his profile and realized that they shared a second language, and that they’d learned it living abroad in the same foreign city.

On the phone they discovered that they’d lived in the same place for five years, and marveled at all of the times they might have run into one another. They’d both left their last great love over there. For Claire it was Francesco. For Ari it was Francesca.

The coincidences were too many to ignore.

They decided they had to meet. If destiny had brought them this far, the least they could do was give it a chance.

As it happened, he wasn’t from Liberty either. He was spending the summer there with his parents, taking a break from a rigorous academic schedule in Boston, where he spent the rest of the year.

Claire had friends in Boston, and they arranged a long weekend was where they could meet for dinner and take it from there. No obligations and no pressure.

They met at a wine shop downstairs from his apartment and purchased supplies for an aperitif. With Aperol spritzes in hand they took at seat opposite each other in his living room, clinked glasses and began laying down the timeline of their lives to see where they intersected.

Their conversation flowed for several hours before they realized they should eat something, especially if they were to continue drinking. Ari excused himself to change his shirt. When Claire rose to use the bathroom and freshen up her face, she cast a glance in the direction of his room. The door was open (she hadn’t meant to see!) and as he was fastening the last few buttons of a white linen oxford just below his waist he looked up as she was passing.

“It’s fine!” she replied shutting the bathroom behind her. She felt at home in his cramped little bathroom. Odder still, his changing clothes in front her felt familiar, as if they’d dressed together a hundred times before.

They walked to the square for dinner. They took their seats and ordered intending to share. Claire was struck at how this, their first meeting, felt nothing like a first date. If anything if felt like a 20th date. Is this how soul mates feel when they meet? She wasn’t sure.

Back at home Ari helped her off with her coat. He gripped the sides of her collar and kissed her. Gently but with intent. She settled herself on the couch and kicked off her shoes.

This time they sat side by side. He opened up another bottle of wine and they let their warm and languid limbs touch with unapologetically. When his flat mate came home, with the excuse of late hour, they headed into his bedroom, where he turned on the stereo, and they both stripped down to their last layers. Their bodies moved together in sync. Automatically. As if they’d both been there before. They fell asleep in each other’s arms, his bicep just hard enough under her head.

The next morning she left his sleeping side to meet her friends for brunch. She shut the door silently behind her. She read a magazine on the train.

Over mimosas her friends asked her what was new. Claire told them all about Ari and their night together. She relayed details like data. Although they rubbed their palms together with intrigue and their eyes shone, she felt in herself no surge of excitement. When he sent her a polite message later in the week her pulse accelerated slightly. If anything their encounter had felt ordinary and safe.

Maybe, for once, that’s what she was meant to feel.