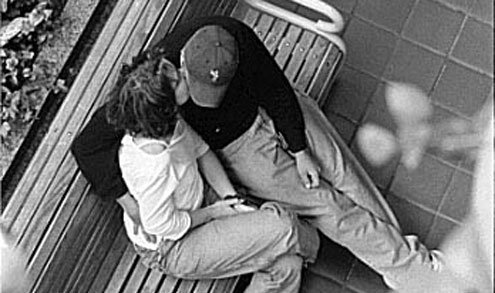 he day after Christmas I woke up with a numb right arm and rolled over. He rolled over with me and kissed my back. He somehow always moves with me in his sleep. If I could wake up anywhere, would I choose a certain city, a person, or a moment? A person, I decided. I watched the snow fall in front of the lit windows across the street. At dawn I tried to slip out of bed but he pulled me back in and kissed me. Still fast asleep.

On the bus to Prague I asked him if he loved me more today than he had yesterday. “I think you’ve plateaued,” he told me. I looked out the window at a field of red lights hovering like the spots behind your eyelids after you’ve looked at a bright light. Every five seconds or so, one would blink and give the sense of unseen movement in a molasses world. “Windmills.” He said.

On Christmas I’d twisted a tinsel pipe-cleaner from a present wrapping into a ring and asked him to marry me. I didn’t know what love was anymore but if it was happiness then I loved him. He asked me if I would cry if he left me. I told him that I didn’t think I would. Nothing personal, just that I didn’t think I could cry for being left anymore. I only have a certain number of tears to be shed for any given reason, and I’ve already cried those ones.

We walked to see Franz Kafka’s birthplace and it was closed, so I told him a story by Kafka.

“Alas,” said the mouse, “the whole world is growing smaller every day. At the beginning it was so big that I was afraid, I kept running and running, and I was glad when I saw walls far away to the right and left, but these long walls have narrowed so quickly that I am in the last chamber already, and there in the corner stands the trap that I must run into.”

“You only need to change your direction,” said the cat, and ate it up.

That night I woke up sweating and pulled the covers off of me. He covered me up again without opening his eyes or lifting his head from the pillow. We were like magnets, or like the center of each other’s gravity, being close to each other is second nature. If you could die anywhere, would you choose based on the place, people, or time? The person, I thought.

On the train to Budapest we got the last two seats and watched as people slowly filled the unheated corridors. They passed the night standing in their coats and gloves, leaning against their suitcases. We sat across from two young gypsies who were madly in love and whispered to each other incessantly. Neither of them had showered in weeks, but the boy didn’t mind her greasy hair and the girl didn’t mind his dirty hands. I guessed that they couldn’t smell each other at all anymore. She slapped her lover hard in the face when his gaze followed a young backpacker through the window. Her lover kissed her in return for the slap.

When the couple fell asleep, I asked him if he would love me if I stank. He said that I did stink. I couldn’t smell myself, but then again, the gypsies couldn’t smell themselves either. I fell asleep in a ball on his lap and woke to fog and feeble sunlight spreading over blackened Hungarian fields. On the 30th we celebrated New Year’s Eve over a game of chess. At midnight we cheered, “Happy New Year!….’s Eve.” At 12:05 he took my queen. On the 31st he read Henry David Thoreau to me while I tried to stay awake until the new year.

We found all of the ticket stations closed at bus station in Budapest, so we asked a young Hungarian couple for help. They told us in lightly accented English that we would have to stay another night in town. Later a hard-faced peasant took on our plight as his own. The man only knew “yes,” “no,” and “ticket” in English but an hour later he had his whole family around him and tears in his eyes as they waved goodbye to us from the dark platform. We wiped fog from the inside of the bus window and shouted köszönöm to them.

On the overnight train to Frankfurt I woke up and watched the moon move with us through the window. They say that gravity distorts time; the stronger the pull of gravity, the slower the progression of time. I woke him up to ask if he would still love me when he had known me for a month. He said that he had already loved me for a lifetime. I told him we had only spent 20 days together. He shrugged and pulled me back into our orbit as he fell asleep. I watched the moon and thought about how time is relative.