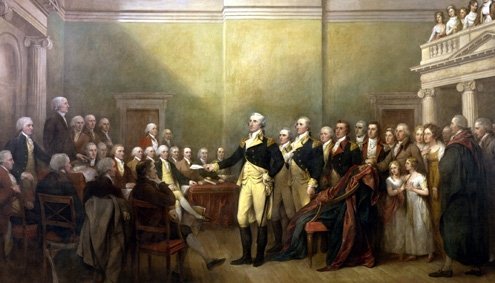 We believe: General George Washington in a John Trumbull painting.
I

covered a lot of ground last summer: N.H., Wis., W. Va., N.C., Ill., Iowa (I cling to the more colorful pre-computer abbreviations). Two themes always strike me during my U.S. travels: How not-American I’ve become and the contrast between my energy and effectiveness levels in America and in Italy.

In Italy, I never feel Italian. But going home doesn’t make me feel entirely American, either.

For example: I dry my laundry on a tiny rack, not in the dryer. I don’t know how to microwave. Flip-flops stay at home and I consider beachwear inappropriate for airline travel. I drive too fast and park in tiny places. Neither a foodie nor a snob, I embarrass my children by trying not to use the word “upscale” while looking for a grocery store that carries olive oil or tomatoes that aren’t crunchy.

But back to the contrast between my Italian and American energy cycle. My energy year goes like this: In America, I get a lot done. Ideas flow and when I return to Italy in September, I’m full of plans and projects. By the following June, the summer energy has been dissipated and just getting on a plane is a chore.

Structural factors play a part. America’s universal orario continuato has a knock-on effect, multiplying my productivity well beyond the extra hours shops remain open. Much is easier and more accessible. Just think of the time lost in parking in Italy.

But the real source of my increased energy and productivity is a mood thing. America itself just feels more energetic and productive. Think of it this way: When Walter Veltroni says “Yes we can” you either yawn or laugh. When an American politician says it, you believe it.

The “Yes we cans” of millions of immigrants built America.

One of my first and favorite American stops is in the self-help section of my local bookstore. I wallow in hope on sale. I soak in the almost painful sensitivity to our personal and national problems. I am inspired by the unquestioning assurance that their resolution is not only possible, but also right at hand, within each of us; indeed, it is our sacred responsibility.

Overweight or overspent, discouragement is allowed, self-pity is not.

Problem-solving guides our worldview, even if wrong-headedly. A heritage of raggedy-assed New England farmers who defeated an imperial power makes us both intolerant of those who appear to lack our spirit and too eager to lend it foolishly. The pervasive power of our positive thinking is our greatest — and constantly renewable — national resource. It still offers hope for the myriad problems assailing America and the world. Despite the pundits, America’s fat-lady has not sung yet.

In Italy, however, visiting the self-help section is embarrassing and sad. A self-delusional, loser feeling clings to it, as if it were a shrine of failure, not a spring of renewal. Even translations of American books (the biggest component) seem like magical thinking, impotent against the tide of negativity outside.

Everywhere you turn, you can’t. In school, choice between encouraging and discouraging falls inevitably on the latter. Coaches scream parolacce at children, humiliating more deeply than any hardened U.S. pro coach. Despite the mandolin-strumming, dolce vita image, Italy’s rates of depression and alienation are high. It also ranks low in global life-satisfaction surveys.

When asked, many Italian friends say the negativity is Catholicism’s legacy. I’m not qualified to comment, but my informal radio survey makes me wonder. The inescapable Radio Maria’s tone is plaintive, querulous and victimized. The tone of equally ubiquitous American religious radio is exhortatory, vigorous and often joyful.

The worrying thing about Italy’s mood is that it is a vicious cycle. Modern neuroscience has demonstrated that moods are contagious. The production of hormones such as serotonin and oxytocin, which make us feel good and trust each other, is influenced by habitual behavior. Depressed parents bring up depressed children.

So this summer, I have decided to reverse my June-September cycle, and I am asking you American readers to help. We won’t be dragged down by Italy’s pervasive bad mood. We’re going to fight back with what a friend of mine once called “quiet persistence.” As in Chaos Theory, the flutter of butterfly wings can affect far away events.

Like those self-help books say, I am going to act “as if.” I’m going to emphasize the positive and defuse the negative. To the bureaucrat who says no, I’ll smile sweetly and kindly suggest an alternative. The aggression of the jerk that cuts me off in traffic will be doused with my smiling acquiescence. The sourness of the nonna who elbows me will melt when I cede and cheerfully wave her ahead.

I plan “shock-and-awe” style positive thinking. What could be more American than that?

Yes, indeed we can.