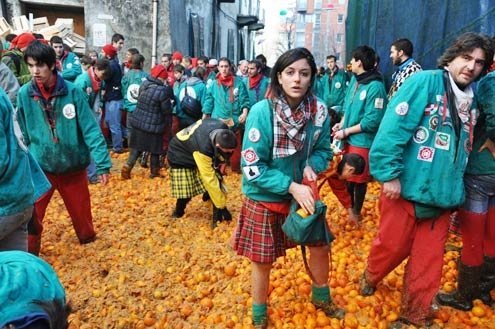 Combat teams stocking up. Photos by Mandy Ruggeri.
B

efore going to the Battle of the Oranges in Ivrea, I knew two things: People throw oranges. Mostly rotten. If you don’t want to be involved, wear a red hat.

As it turned out, it wasn’t quite that simple.

It was Fat Tuesday, which marks the end of Carnevale. But the day also the last of three reserved for orange throwing in this lovely, medieval town in Piedmont. (Without the Battle of the Oranges, “lovely” and “medieval” would relegate Ivrea to relative obscurity in medieval town-filled Italy).

Heading into Ivrea, we saw a vendor selling red hats mobbed by would-be spectators. Five euros to not get pummeled by oranges? Fine. Safety first. Red hats donned — they looked more like long, cotton tubes — we ventured into the town.

Mayhem met us at the medieval bridge.

Oranges already lay in a thick sludge on the ground. People dressed head-to-toe in green stalked the street, scooping up oranges still firm enough to use as projectiles. One young man had a black eye. Another had a bloodied nose.

I didn’t have much time to ponder these injuries before a cart came around the bend. Four huge black horses, harnesses jangling, pulled the cart; on top loomed six or seven large men, covered head to toe in armor, medieval coats of arms on their chests. Except for their modern-looking sports helmets, they seemed like they’d ridden straight out of a medieval legend and into a movie war scene.

As the spectators pushed to the side (except for one who stood up, pointing his telephoto lens; a seeming veteran of the event, he had the foresight to wrap his entire camera in duct tape), the green-dressed people rushed forward and threw their oranges as hard as they could at the men on the cart. The men on the cart threw oranges back. The fruit flew in every direction. Even though I was a few feet away, behind a low wall, it wasn’t enough protection. One hit me on the leg, hard, while others exploded against the wall behind me.

A meaty guy in his early thirties doubled over and limped into my corner. He’d taken an orange hard in the face. After swigging some wine, he stopped ducking the oranges and headed out to throw back his own. Cart number two was already on the bridge.

Between carts, participants told me that the origins of the battle dated back centuries. Nobody knew exactly when it began. Legend had it that the villagers of Ivrea rose up against a corrupt duke and overthrew him. Every year, the town paid homage to the duke-ousting battle by reenacting it in a kind of war theater: The unarmored people on the street played the rebels, while the frightening-looking men on the carts were, of course, the duke’s men.

Though a historical reenactment, a way to remember a proud moment in the town’s history, the Battle of the Oranges also tied communities within the town together. There were nine “teams.” Each had a specific quarter in the town, and each sought to be the best orange-throwers.

During one of the 30-second respites between carts, I abandoned my corner. We moved through the town. All of the buildings were covered in tarp or netting. The air smelled sharply of oranges. (After the battle, I couldn’t drink orange juice or touch a citrus fruit for a month). Everywhere we went, the cobblestoned streets swam in a thick, orange-brown sludge. Groups of locals in their team colors — mostly young people, many with new injuries (a bloodied nose), others with old injuries (a permanently-broken nose) — gathered around emptying crates or bent to the ground, stuffing their pockets with ammunition.

Shortly after, I wound up in the ambulance.

It was bound to happen: Unless you stand shoulder-to-shoulder with a hundred other people in a rare net-covered spot and don’t move for the entire day, you’re in the action. When one cart went past, I ducked, but peeked up at just the wrong moment. Immediately, my temple exploded. For a moment, I couldn’t breathe. I looked down. Blood streamed into my hands. My boyfriend wadded up his red hat and pressed it to my face. It was the first time our hats had proved useful that day.

At the ambulance, the doctor nodded knowingly. “Sunglasses,” he said. The orange had jammed the temple of the glasses into my skin, cutting into the contact bruise I would have gotten anyway. Gauze, ice pack and concussion check later, I was back in the orange-filled streets.

At the end of the day, everyone filled the town’s main piazza. We happened to stand with the Aranceri Tuchini del Borghetto — the team in green that we’d started the day with. I recognized some of them. Even with pulp-coated hair and soggy clothes and cuts and bruises, they looked pumped up in the way that only this kind of surrogate war event can manage — with a mixture of adrenaline, and exhaustion, and wine.

Announcements emanated from the balcony high above us. A nod to the children of Ivrea (on one street, the duke’s men threw gently as children, training for their future commitment, threw back). And awards to the teams. This team won for “fair play.” That one for ability.

As they exploded into cheers, throwing their arms around each other, the backlash couldn’t have been more predictable: The other teams in the piazza started throwing oranges at our corner. Hard.

Putting my hands over my face, I ducked for what I hoped would be the last time. And, despite myself, started to laugh.