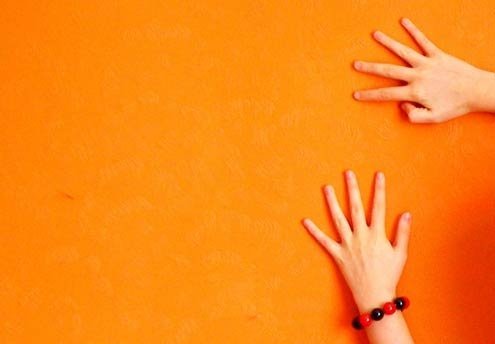 hat exactly underlies the magic of colors? What makes colors so hypnotic? What allows them to both seduce and repel us? Thoughts about color and their power turned into a daily priority recently when my young son Lorenzo adamantly insisted that he could only wear a certain pair of shoes. Never mind that the shoes in question were eight sizes too large. All that mattered was their color — orange — which he’d decided was his favorite.

But why had Lorenzo picked orange, I asked myself? After all, it’s mostly snubbed in fashion circles. Orange is easy to marginalize, if not forget. Even sports icons don’t wear it often. Aside from oranges and orange juice it doesn’t play much of a daily role.

So I played detective. Fate would have it that someone had given us a gift of a sleeveless orange jacket and matching sneakers. Seeing the combination apparently triggered something in Lorenzo’s very active brain. Orange was “it.” Every day, he wanted to put on the orange jacket and the sneakers. Telling him “no” was telling a dinosaur to please make itself smaller. We, his parents, were irrelevant. His whims came first. Making matters worse, as soon as my parents and friends heard the orange story, guess what color Lorenzo’s gifts came in?

A few days ago, over breakfast, Lorenzo decided he wanted a bite of my multi-grain flakes and dried fruit. Proud of my Rome roots, I told him that Italian multi-grain, farro (often called spelt), was an ancient grain that had once been a staple of Roman legionnaires. Some historians still insist Roman supremacy on the battlefield was farro-fueled; basically, Rome’s soldiers were healthier than the opposition.

Since spelt is easily digestible, the Romans went into battle fresh. Their barbarian adversaries, worn down by hunting game, had to digest their meat haul, which slowed them down. At the height of the Roman Empire, its adversaries suffered from constant indigestion.

After hearing all this history, Lorenzo just continued staring at my flakes and me. Roman history wasn’t on his mind. “Daddy, I want those ones… because… because… they’re orange.”

My wife stifled a laugh. The cereal box, I noticed for the first time, was orange.

Another time I bought blueberries, hoping to win over Lorenzo. When he asked me what they were I immediately (and again proudly) explained where they grow, their healthiness, how they help blood circulation at a molecular level. Lorenzo listened carefully to all my rocket science. His reply: “Daddy, I… I… don’t want… blueberry, I… I… want… orange-berry.”

At this juncture I hoisted the white flag. I also decided to change strategy. Instead of challenging my son’s orange addiction I would humor it, assuming that sooner or later orange would wear out its welcome.

To make him happy, I began thinking up appropriate orange-colored foods, a list that included long-stemmed oranges, Japanese persimmon, Halloween pumpkins, prized L’Aquila saffron, carrots, melon, and papaya. I suddenly realized I actually could satisfy Lorenzo’s color addiction. I could make pumpkin risotto or mashed pumpkin or carrot. I could put together zucchini flowers in batter stuffed with mozzarella and anchovies. There was orange juice, apricot, persimmon marmalade, or meat-stuffed bell peppers (Peperoni arancioni). As dessert, I could make a Bavarian melon or a classic baba (minus rum — at the risk of substituting one addiction for another). In truth, the kitchen is among the few places where orange never loses its appeal.

But before turning into an orange food machine I chatted up a friend who also happens to be a pediatric neurologist. After I gave her the entire orange saga, she came back at me with typical medical black humor.

“Consider yourself lucky caro,” she told me.

She laughed. “Lorenzo picked orange. But what if he’d fallen for black…”

Paired with brown rice, this is a meal-sized dish. Also, since peppers are available year-round, it is not limited by season.

— Mix the ingredients together until the blend is smooth and compact, and then let it sit in a cool place.

— Wash the peppers, dry them thoroughly, and cut off the tops (about 1/2 their total length). The tops (including stalks) will act as “lids.”

— Drain the peppers of their inner pith and seeds and fill them with mixture you’ve made.

— In a pan, place 1-2 tablespoons of olive oil and toast the breadcrumbs. When they turn a golden brown, remove them from the heat.

— Arrange the stuffed peppers bunched-up on a well-greased, non-stick pan and sprinkle them with the grated cheese and toasted breadcrumbs. Bake at 180C for about 60 minutes. Check after 40 minutes, since cooking time varies depending on the pepper size.

— Put the pepper “hats” a baking sheet covered with parchment paper and bake along with the peppers. When cooked and out of the oven, let the peppers rest 5 minutes and then serve, their “hats” added as lids.

I can’t think of any orange wines, but having already done your part to satisfy the orange addiction, you can relax with a red Brunello di Montalcino or a white Pinot Grigio of choice.