Opera in the blood 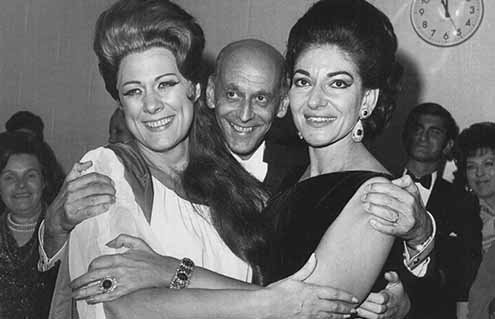 pera runs in my family. No one to my knowledge has ever had an excellent singing voice let alone operatic talent — though my mother swears my father can carry a tune, evidenced by his participation in mass hymns. But we do come from a long line of listeners.

My great Uncle Salvatore (Sasa’) rarely discussed his role in the Italian navy during World War II, but regularly punctuated conversations with commentaries on a fledgling soprano’s recent performance or his thoughts of the Bayreuth Festival’s staging of Wagner’s works (abstract and heinous).

He didn’t come from money. He lived alone in a plain Calabria village home that once held seven, which he kept surprisingly tidy. Imagining Verdi and Mozart productions passing regularly through his southern mountain town was difficult to say the least. Yet he still somehow found his way to the art form.

When traveling to northern cities during his tours, he’d sit hunched in the nosebleed seats (or so I imagine) to hear La Traviata or Carmen. His ear was trained to swiftly and at times brutally separate tenor from baritone, and it’s said that he once publicly dressed down Boston Globe opera critic Richard Dyer after a harsh review of Franco Corelli that he found objectionable. My uncle and his wife never had children of their own, but my father was a surrogate son.

Sasa’ was the reason why, when looking through my father’s childhood things, I found an untuned violin, horsehairs splayed from the bow, Latin textbooks, Beatles memorabilia, and notebooks of dreamily sketched opera sets and costumes. Sasa’ was behind my father’s attended productions of Il Trovatore and Otello as his peers crowded the stands of ball games at Fenway. I’m told that when my father was 10, he waited outside the theater for soprano Renata Tebaldi, and, caught up in her regality, solemnly kissed her hand,

Accompanied by Sasa’, my dad saw Luciano Pavarotti sing in Providence when the tenor was on the cusp of greatness. It was through opera librettos that my father learned Italian, not the clipped Southern dialect he’d heard at home, but the curves of verbs and tenses, elegant and unfamiliar.

Decades later, my childhood bedtime stories, invented by my dad, were peppered with people named Fafner and Fasolt, Klingsor, characters from Wagner operas, plucked out of their score and dropped unceremoniously into a pastel land of bunny rabbits and princesses.

On long car rides, I’d ask my dad to tell me an “opera story,” which consisted of his vivid narration of Lakme and Tristan und Isolde. Hansel & Gretel was my first, real opera —in English — followed later by La Boheme, flecked with themes of death and remorse, in Italian. I named my Beanie Baby plush cow Maria, after the chubby singer who played the title role, Mimì — something my parents chuckled at. Best not to tell her that, my mother said when I sat down to compose a fan letter. I wasn’t sure why.

Instead of taking us to The Nutcracker the next holiday season, my father chose a more unorthodox route. My twin sister and I were brought along to Mefistofele, the tale of a Faustian bargain from the devil’s point of view.

Much later, for a college graduation gift, we ventured to the Metropolitan Opera to see Rigoletto. Even now, my Spotify list consists of arias. Mon coeur s’ouvre a ta voix from Samson et Delilah makes me teary, and even though I’m too old to daydream, I sometimes picture myself serenading unsuspecting acquaintances with a version of O Mio Babbino Caro — short, familiar, and to the point, an eternal crowd pleaser. “Your voice,” they’d say. “We never knew!”

Recently I was invited to a friend’s birthday (“Let’s ring in 28 with some cocktails!” urged the text). I should have gone. Here was an opportunity to be social, maybe meet someone. I’ve been single for nearly a year. Instead, I went to the opera, a free ticket thanks to where I work. No one else wanted to come — too sick, too busy, too tired, too little notice. No matter. I loved every moment.