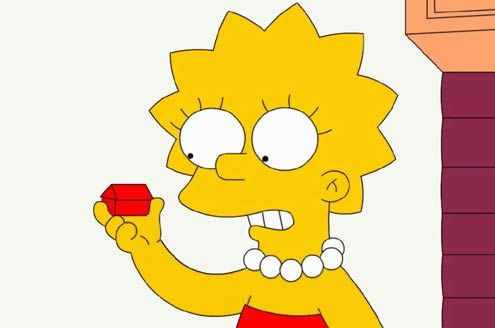 I shot my hand up Lisa Simpson-style. “Crave,” I observed, had little to do with “creep.” The teacher was having none of it...
O

ne evening in June, I was walking down Wisconsin Avenue in Washington, D.C. when a hand grabbed my forearm. I turned around puzzled to see that the hand belonged to a forty-something woman who’d somehow squeezed her flesh into the clothes of a 14-year-old.

“Guess?” she said with a hopeful look.

Then it hit me: platform shoes, pointless gigantic sunglasses (the sun was setting), and fake-Prada handbag — typical Italian female outfit. I hurried my mind through images in the family album hoping this wasn’t some long-forgotten aunt.

Frustrated by my silence, she finally uttered an exasperated, “Shopping!”

She smiled with relief when I spoke in my native Italian, only to frown a few seconds later when faced with the stark truth that there are no Guess boutiques in Wisconsin Avenue or anywhere else in the District of Columbia.

Recalling the encounter, I consulted Google looking for estimates of how well Italians speak foreign languages. But the Oracle of Internet let me down: No such figures exists. Sooner or later, though, they’ll come out, probably in the form of a EU-wide survey of language proficiency in member states. And we Italians will be shamed.

The news that we’re terrible at foreign languages won’t come as a shock. First, we already know that we “speak English not very good,” and don’t need the EU to remind us. Second, owing to Latin progeny’s innate ability to communicate with gestures, we can make ourselves fairly clear to anyone.

Have retired Brits ever scorned our fine Amalfi coast hotels because Gino the doorman hasn’t passed the English Proficiency Test? No, Mr. and Mrs. Brown soon learned to read Gino’s hand-waving as well as they understood their Sussex neighbor.

So what if we can’t speak English as well as the Germans or the Dutch? If there’s one thing we are good at, it’s irony at our own expense. We’ll make a joke, laugh it off, and continue with business as usual.

But if administered an EU-wide foreign language proficiency test my guess is that Italians would do worse than ever. Even Greeks, whose EU entry stripped us of the title of Western Europe’s fanalino di coda (tail-end Charlie), do better in English.

So why is the average Italian so bad at foreign languages? I can only provide scattered childhood anecdotes.

1998: I’m sitting in my freshman high-school desk. “Crave,” reads a nasal voice from the teacher’s desk, “means proceeding like a snake.” Fresh from private English classes with costly Irish-native tutor, I shot my hand up Lisa Simpson-style. “Crave,” I observed, had little to do with “creep.” The teacher was having none of it. She stared me down condescendingly and patiently explained that “crave” could sometimes means “creep.” She also hated me for the rest of my high-school career.

2001: It’s the run-up to national elections. A giant Berlusconi’s poster peers down at passersby promising the “School of the Three Is: Internet, Inglese, Informatica” (as in Internet, English, computer science). Writing three I’s would have been too difficult.

2005: The “School of the Three Is” promise never comes true. My little cousin graduates from high-school. After five years of liceo-level language training, she still offers to “open the fenster.” The “window” just doesn’t cut it.

2007: My friend’s Eurostar train to Milan runs an hour late. I tell her by phone to fight for a refund as soon as she gets off. But if English is your debating language, you’re doomed. My friend is told to fold her ticket, “put it in a pocket and send it to ‘the railways of the state’.”

Never mind the ruling government, Italy’s public school language teachers are chronically underpaid, under-trained and frustrated. Many never studied abroad and thus drag heavy Neapolitan, Roman or Milanese accent into English-language lectures. Like most of their colleagues, they probably spent the best years of their youth bouncing back and forth between Trento and Catania hoping escape “temp” limbo.

It’s no wonder that when they finally do land a full-time position they have little patience for a spoiled kid (whose dad is paying for private English lessons) weighing in on the difference between “creep” and “crave.”

So the next time the train conductor tells you to fold your coupon in a “pocket” and place a “stamp” on it, be patient. His Sicilian high-school teacher probably concocted a philosophical argument that “pocket” could also mean “envelope.”

And he was none the wiser.

About the Author: Erica Alini

Erica Alini was born and raised in Milan. After spending a year of high school in Washington state, she decided that reporting about international affairs would be a sweet way to make a living. She earned a BA in International Relations from the University of Florence in June of 2006 and moved to Washington, D.C. to continue her studies at the Master of Science in Foreign Service at Georgetown University. She is writes features and blogs for DC-based Foreign Policy magazine (blog.foreignpolicy.com). She graduates from Georgetown in December 2008.