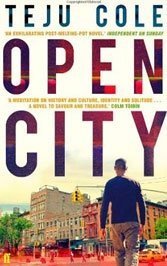 The choreography of Teju Cole’s debut novel is simple but sublime. Its narrator, Julius, is a 32-year-old Nigerian-born American who moved from Lagos to New York at 18 and is now a resident in psychiatry at a local university. He is the only child of a German mother and a Nigerian father who spends whole days wandering through his adopted city responding to its characters and cultural vicissitudes thereby creating a political, artistic and metaphysical portrait of urban life, as well as his own. He sways between intimate ruminations on race, alienation and local history to memories of a Nigerian boyhood that included rigorous military school. He is inquisitive, melancholy, and fiercely attentive to Western intellectual traditions. Julius knows European literature, classical music, and Dutch painting. He digs into the roots of New York as an exercise in personal archeology — a mind dig of sorts — reflecting an expatriate’s impatient awareness.

But who is he really, this Julius, “swaddled in a private darkness”? Who is this self-involved, bird-watching man of enlightened consciousness who clearly indulges privacy while remaining acutely sensitive to his African roots (“Blacks, ‘we blacks…'”) and the international vicissitudes of race and religious relationships? What does he stand for? What does he want? The questions far outweigh the answers. Cole is like W.G. Sebald or Pessoa, or even German modernists, in that he inspires a thinking man into relentless contemplation of the beauty and decay around him. But the man himself is ambiguous. Cole holds up slide after slide of Julius’s life and sensibilities while dispensing with any fuller shape. What does Julius get out of his visits to a dying former literature professor? Why, in Brussels, which he visits because he grandmother once lived there, does he leave acquaintances to do his talking? Why, later, is he all but mute after black youths beat him up in Harlem? The answer might be that he exists to make amends.

At times, perhaps inevitably, even the best meditative prose can fall prey to the pretentious, and Cole (like Julius raised in Nigeria) at times capitulates to name-dropping temptations. This is a real and distracting shortcoming.

Still, when Cole directs Mahler-loving Julius — his alter ego — to focus on New York, “this strangest of islands,” the writing displays preternatural insight. In Brussels, however, Cole seeks to make a local narrative universal, introducing Julius to a host of political views — mostly regarding oppression — most of which run afoul of wordy lectures. Yet Julius is a fascinating creation, a half-breed for a century in which half-anything’s have yielded to global whole, to the international man, when in fact there is no such man, and Julius’ identity still contingent on recollections of days of chains and shackles. “What is exile now, when everyone comes and goes freely?” asks Julius. The answer is that freedom of movement does not liberate a man, let alone cancel out the abyss.