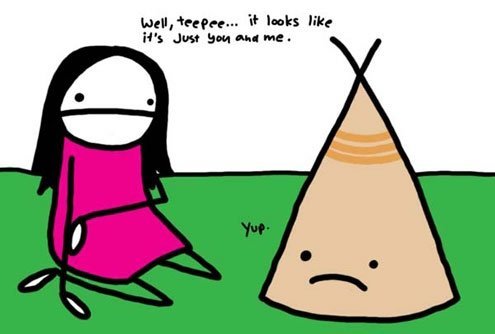 Image by Natalie Dee.
I

haven’t been very happy lately. And I blame Maslow. Abraham Maslow. Based on his little pyramid of the psychological self that I learned about in high school, I thought by now everything would have come together. By now I would have understood my unique purpose, be brilliantly creative, and fulfill my potential.

The truth is, I’m still trying to figure it all out. Where is that self-actualization anyway?

To refresh your memory, in 1943 Maslow submitted his ideas in a paper called “Theory of Human Motivation.” His main idea, the “Hierarchy of Needs,” charted the five stages of individual growth in their order of importance. This hierarchy is shaped as a pyramid. The bottom tier defines the most basic physiological needs and moves upward toward psychological development.

The first basic stage is food, water and shelter. When these have been met, the individual moves to the second level, toward safety and security, seeking a sense of predictability in the world. The third layer is composed of the social needs of friendship and family, a yearning to belong.

Higher up, at the fourth level, is esteem, which includes self-esteem and confidence, being respected by others. At the very top is self-actualization.

It’s the development of authenticity, meaningfulness and creative vitality. The modern day equivalent to “you have arrived.”

Self-actualization is the level I’m working on, but perhaps I’m deluding myself.

It all sounds so easy, move up the steps and you’re there. But honestly, it’d be easier if Maslow were just plain wrong.

I am somewhat relieved that I am far from alone. Seems everyone is grappling with the same questions.

Just yesterday I met a woman at a party. Jan, a promoter for a German record company relayed it to me this way.

“I’ve been working for this record company for 23 years. I love my job and I’m happy I still have it. But I’m getting ready for the next big thing I’m going to do. You know, the really important thing you finally get to do with your life.”

“Well, I’m not sure exactly,” she sighed. “I want to do something meaningful, something creative and totally different from what I’ve done before. But honestly, I don’t know what it is.”

“I feel like these deaths are turning my life’s gas range to high. I can’t sit around and keep doing the same job and live the same way. I need to get on with really fulfilling my life.”

“So, what does that mean?” I asked. “You’re going to quit your job and do what?”

“That’s the big question. I just don’t have an answer.” She slouched heavy in her chair. “All these people are dying, my life is going by and I don’t know what I’m really doing with it.”

What has been odd to see among all the people I’ve heard this lament from, in one version or another, is none of them seem excited. None are elevated by the prospect of the next thing. If anything, it’s a burden, a torment. It involves a deep and unrelenting urgency; I’ve got to figure this out!

Before I was aware of my focused pyramid striving, moving toward the big SA, I was happier. I wasn’t obsessed with complex explorations of my talents and myself. I wasn’t desperately trying to tap into the eternal well of creativity. I was naturally playful and curious.

Before I was searching for the meaningful thing to do with my life, I just had fun. I was spontaneous and joyful. I didn’t evaluate every minute on whether it was moving me in the right direction or not. The clock was not my enemy.

Maybe what I need to do is to return to Maslow’s pyramid with this spirit in mind. The spirit of joy.

And in this spirit, I will buy a box of crayons and remember how to play, turn his pyramid into an Indian teepee or add another and make a star. I will color it red… or maybe turquoise.

I know deep inside that would make me a whole lot happier than wondering if I’ve arrived.