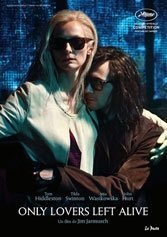 Languid and erudite, Adam (Tom Hiddleston) and Eve (Tilda Swinton) have kept their long-distance relationship alive. But literary Eve, sensing that successful musician Adam is depressed, decides to leave Tangier and join him in desolate Detroit. For vampires, they’re both pretty straight arrows.

A recluse, Adam evades intrusive rocker fans seeking to ferret him out. Other than nocturnal hospital visits to one Dr. Watson (Jeffrey Wright), he relies on resourceful rocker Ian (Anton Yelchin) to fill his needs — whether it’s incredibly cool vintage guitars and sound systems or a wooden bullet ordered for a more dire purpose. When Eve arrives, she cheers and cajoles Adam. Witty and sophisticated, worldly and world-weary, this is an idealistic and cultured couple of many talents. They’re curious, mature, sensual and hip. They refer to plants and animals by their Latin names. When they dance in the living room, it’s a profound tribute of the power of love and friendship. Then again, they have centuries of experience. (Or is it millennia? Eve pauses when she sees an illustration of Ghiberti’s “Creation of Eve” in Florence.)

But a complication looms. Ava (Mia Wasikowska), Eve’s younger sister and an uninvited bundle of fun, arrives from Los Angeles (for Adam, “zombie central”) with her voracious appetite. She tends to wreak havoc, including with the food chain, leaving Adam and Eve to deal with the aftermath. Like much of the world, they face a dwindling food supply that’s increasingly contaminated, a situation that gets all the more dicey when Eve can no longer rely on Shakespeare contemporary Christopher Marlowe (John Hurt), her mentor.

The casting is magic and director Jim Jarmusch creates a beautifully balanced and intimate mood that’s attentive to circular forms in movement and interiors. The soundtrack, including Jarmusch’s hypnotic instrumentals (by his band SQÜRL), blues tracks and music by Lebanese vocalist Yasmine Hamdan, underscores the rhythmic ebbs and flows of a couple who delight in one another and are determined to survive.