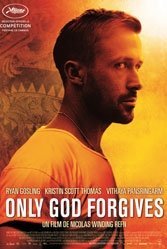 Moving through the underbelly of Thailand as predator and prey, adjudicator and avenger, the riveting trio of Julian (Ryan Gosling), Crystal (Kristin Scott Thomas), and Chan (Vithaya Pansringarm) keeps the suspense as sharp as the words (and swords) in writer-director Nicolas Winding Refn’s film about underworld disputes Bangkok-style, where justice is swift and personal.

Underworld figure Julian runs a local boxing club, but when his older brother Billy (Tom Burke) murders an underage prostitute someone has to pay — and it ends up being Billy. Enter their hellcat mother, Crystal, whose mothering skills range from “Manchurian Candidate” to “Pink Flamingoes.” Looking like Donatella Versace, she presides over a drug racket that’s scarier than the fashion industry. She seek vengeance and dismisses Billy’s crime with the quip “I’m sure he had his reasons.”

Dane Refn, who has described his story as a Far East Western, deftly plays off the physical presence of the three main characters as they draw closer to the core of corruption and revenge. Julian, aware of the horror of his brother’s crime, seeks no reprisals, but his mother’s arrival changes that. Police officer and nightclub singer Chan is a violent enforcer that not even master manipulator Crystal — destined for the Bad Mother Hall of Fame — can control.

Attempts to override corruption with humanity are crushed by the weight of what came before. Lighting adds drama to scenes that can quickly turn raw or cold. This is a compelling, deeply violent, and arduous journey to a place where forgiveness seems to have little place.