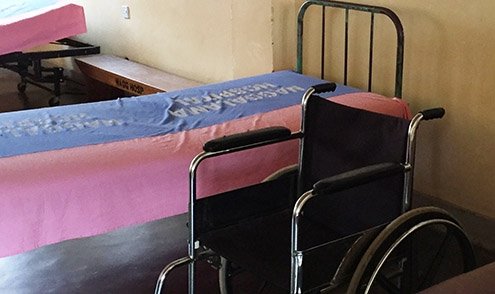 The Spartan facilities of the adult ward of the hospital in rural Uganda where the author worked for two weeks. Photo by Lorien Menhennett.
&

#8220;What kind of doctor do you want to be?” I hear the question often as a medical student and it’s one I thought about a great deal this summer while doing two weeks of palliative care work in rural Uganda. What most people mean by “kind of medicine” is the branch or specialty you might be interested in — internal medicine, neurology, dermatology, surgery, and the like.

The question I asked myself was similar but substantially different: “How do I want to practice medicine?”

I’ve concluded that whatever specialty I choose, I want to practice medicine in ways that encourage patients to share their stories with me. When I see a man who’s suffered a heart attack and ask about his chest pain, or ask a woman with pneumonia about her breathing, or console a grief-stricken son watching his mother die from cancer — I want to do these things in ways that emphasize that a patient is a person, not just a diagnosis or someone suffering the effects of a disease. I want family members to know they matter too. Mostly, I want to listen.

This isn’t a new idea to me. It feels natural in fact, particularly given my training and experience as a journalist. My time in Africa only reinforced my attachment to the concept. Depending on the specialty I choose, I know I might only have a few minutes for each person’s story. But those few minutes alone can make all the difference. I saw it in the way doctors interacted with patients in Uganda. I even got my own share of personal experience.

One morning, I was doing rounds with one of the hospital’s physicians and his medical students. As we stopped at each bed, I listened carefully to the presentation of each case. I observed the doctor, students, caregivers, and patients. In one bed was a woman lying on her left side, staring vacantly forward. She mumbled answers when questioned. The doctor explained she’d come in complaining of widespread pain soon after several of her family members had been killed in an accident. He suspected much of her discomfort had emotional roots. Hearing the details of the trauma the woman had experienced was literally sickening. No wonder she felt pain. Yet no one addressed her emotional wellbeing. Since we were moving bed-to-bed I knew I only had a moment. I asked a local medical student to tell her in her language that I knew she had experienced a great loss. And I was very sorry. I wished I had more time to dig deeper into the woman’s feelings. To find out what had given her strength in the past and try to help her tap into that. But we had to move on. I hoped that my words, either then or later on, would remind her that someone cared.

At another bedside, a critically ill woman with severe burns was asleep under a fleece blanket and mosquito netting. Her caregiver, another family member, seemed understandably agitated. But the talk at the bedside revolved solely around the patient’s injuries and treatment — what antibiotics she was taking and her daily dressing changes. I again turned to a local medical student to ask the caregiver whether she had any concerns about her gravely ill relative. The caregiver’s response was direct and immediate. Via the medical student translator, she told me she was concerned that the patient hadn’t been eating. I told her the palliative care doctors would return to the hospital later and discuss the matter with her. I’m not sure if this relieved any of the caregiver’s anxiety, but at least she knew she could talk to someone about her worries. I had asked — and listened. No one else had.

It doesn’t take a lot to show a patient a caring side. A doctor who cares, and one who listens, even in uncomfortable silences — that’s the kind of doctor I want to be.