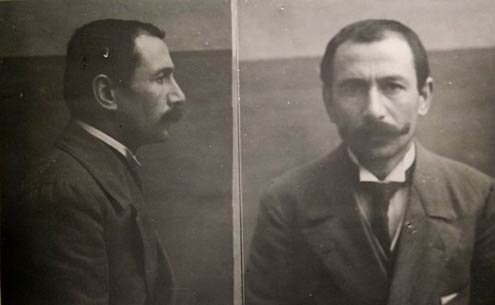 fredo Geri’s art gallery on Florence’s Via Borgo Ognissanti wasn’t far from Leonardo da Vinci painted his celebrated masterpiece, the Mona Lisa, in 1503. It was in the gallery, on Nov. 29, 1913, that Geri, a well-known antiques dealer, received a letter with a return address from a post office box in Paris. “The stolen work of Leonardo da Vinci is in my possession. It seems to belong to Italy since its painter was an Italian.” The sender had signed it, “Leonardo.”

“Leonardo” turned out to be Vincenzo Peruggia, the unremarkable thief behind the most remarkable 20th-century art heist. On Aug. 21, 1911, in broad daylight, Peruggia pinched the Mona Lisa from the renowned Louvre.

The Paris museum was closed to the public on Mondays, the day Peruggia, a glazier and handyman who had briefly worked at the museum, entered in the early morning hours and hid in a small storage closet crammed with easels and art supplies. When the coast was clear, Peruggia, disguised in the white smock worn by maintenance employees, slipped from the closet and made his way to the Salon Carré, a repository for some of the Louvre’s most sublime (and priceless) Renaissance paintings.

Bee-lining past masterpieces by Raphael, Titian and Correggio, the thief went straight for the Mona Lisa, swiping the 30×15 inch portrait of La Joconde, as she’s known France, from the four metal hooks that fastened the painting to the wall. In a service stairwell, Peruggia shucked off the Mona Lisa’s weighty frame. He also did away with the painting’s protective glass box, which he himself had made after a string of vandalisms had roused the Louvre to ramp up security.

Peruggia was fumbling to open a door in the stairwell when a Louvre plumber named Sauvet spotted him. Peruggia showed Sauvet the problem: the door was missing its knob. Seeing nothing obviously wrong with the situation, Sauvet produced pliers and obligingly opened the door. With the 18-pound Mona Lisa concealed underneath his smock, Peruggia bolted for the Louvre’s main entrance and escaped into the warm Paris morning. A passerby, the only other person beside Sauvet to encounter the thief, later told police that he he’d a man carrying a bundle of white cloth throw a door knob into a ditch on the side of the street.

Incredibly, 28 hours passed before anyone at the Louvre noticed that the Mona Lisa was missing. Because paintings needed to be quickly removed in case of fire, the museum was not in the habit of ensuring priceless works of art were affixed to its walls. “You might as well pretend that one could steal the towers of Notre Dame,” Louvre director Théophile Homolle once boasted of museum’s security. He was on vacation when the theft occurred, and was promptly forced to resign upon his return.

Despite unprecedented international press coverage, sealed borders, and customs searches of every train, vessel and vehicle departing France, and a dragnet that investigated Pablo Picasso and the French avant-garde poet, Guillaume Apollinaire (the only person beside Peruggia ever arrested for the crime), the thief and the Mona Lisa remained at large for more than two years.

It was then that the mysterious “Leonardo” missive arrived. Not exactly a smoking gun (conspiracy theories and false alarms were rampant at that point), but Geri deemed it was definitely worth putting in a call to Giovanni Poggi, the director of Florence’s Uffizi Gallery.

Poggi advised Geri to lure “Leonardo” to Florence. On the December 10, Peruggia, wearing a suit and tie and all of 5-foot-3, walked into Geri’s shop. The Mona Lisa was safe in his room at the Hotel Tripoli-Italia (since renamed the Hotel La Gioconda). He wanted 500,000 lire — about $100,000 — for the painting, and he did not want it returned to France.

The next day, Geri and Poggi visited Peruggia in his hotel room. From a secret compartment at the bottom of a small trunk stuffed with shoes, hats, tools, paintbrushes, a mandolin, and other “wretched belongings,” as Geri wrote, Peruggia produced the Mona Lisa. When not propped up on Peruggia’s kitchen table for private viewing, the woman with the beguiling smile was unceremoniously stashed here, wrapped in a touch of red silk.

Poggi verified the Louvre’s catalog number and stamp on the back and convinced Peruggia that the painting needed further authenticating at the Uffizi. The three men went to the museum where Poggi positively identified the Mona Lisa by its craquelure, impossible to replicate cracks that appear in a painting’s varnish over time.

A gullible Peruggia agreed to let the Uffizi keep the painting overnight while Geri and Poggi arranged with the proper authorities for his payout. Giddy and overwhelmed, Peruggia returned to his hotel. He was reportedly shocked when the police showed up to arrest him.

Peruggia’s trial at Florence’s imposing Palazzo Vecchio began on June 4, 1914 (France chose not to extradite him). The 32-year-old Peruggia invoked a patriot’s defense (“I am an Italian and I do not want the picture given back to the Louvre.”) He insisted that Napoleon had stolen the Mona Lisa from Italy. During his brief stint working at the Louvre, he had seen proof: prints in a book showing ox-driven carts “loaded with paintings, statues, other works of art… Things that were leaving Italy and going to France.”

But his art history was confused at best. Da Vinci had taken the Mona Lisa with him when he moved to France in 1516, and the painting had remained there ever since. After Da Vinci died, his patron, the French King, Francois I, eventually, and legally, purchased the Mona Lisa.

Peruggia’s patriot game quickly unraveled. Originally from Dumenza in northern Italy, Peruggia had lived in France for some time. In court, his hostility toward the French was palpable. They called him “macaroni” and dumped salt in his wine. They mocked his zealous notion that the Louvre’s finest art was Italian. He boasted that he had carried the painting off from the Louvre “with the greatest nonchalance,” and dropped the astonishing bomb that he had smuggled the precious cargo to his apartment on the east side of Paris in a taxi after realizing, mid-getaway, that he was riding the wrong bus.

On the stand, Peruggia spun a contradictory tale. At first he had had accomplices, but then he had acted alone. He proclaimed that he “only desired that this masterpiece would be put in its place of honor here in Florence,” yet it was revealed that he had compiled a list of potential Mona Lisa buyers. He had even contacted one of them, Harry Duveen, who was headquartered not in Florence, but in London. Accused by a presiding judge of aspiring to benefit from the theft, Peruggia, exasperated, replied, “Ah, benefit, benefit. Certainly something better than what happened to me here.”

Ultimately, Peruggia came across in court as disgruntled and avaricious. A court-appointed psychiatrist summed him up as “mentally deficient.” But it was a victimless crime, his lawyer maintained, saying that his was an act patriotism that made him a hero to the Italian people. And now, thanks to the heist, the Mona Lisa, which made an exuberant tour of Milan and Rome before returning to the Louvre, was world famous.

Peruggia was sentenced to a year and 15 days in jail. His sentence was reduced to seven months and nine days, but he was immediately released because of time served. By now, Europe was on the verge of World War I, and once it broke out Peruggia would fight with the Italian Army, a patriot at last.