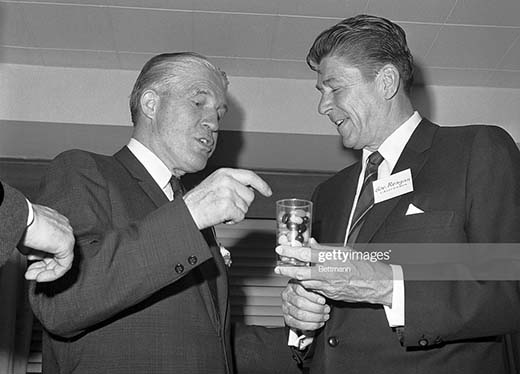 The author's father was a fan of conservative Republicans George Romney (Mitt's father), left, and former Democrat Ronald Reagan, the latter a two-term president. The two are pictured in 1967.
M

y childhood home was a hotbed of the conservative movement. Free-market economist Milton Friedman, who presided over conservative economics from nearby Chicago, was a household deity. My father touted Ronald Reagan and George Romney (governor of Michigan and father of Mitch) even before they entered national politics. He was a fellow traveler of associations that led the charge against the lying “liberal press.” For him, socialism and “big government” were evil identical twins.

My father had his reasons, though. He had worked in British hospitals immediately after Britain’s National Health Service was founded in 1948. Dad felt the NHS turned his British friends, motivated and caring MDs, into workers on a medical assembly line. He felt government intervention sapped their ambition and bred dull inefficiency.

Or as he had printed on bumper stickers: “If you like how the government runs the post office, you’ll love how it runs your hospital.”

Eventually, Dad’s experience of “socialized medicine” expanded to his worldview.

Because his intelligence and broad human experience made him a good guide to life, I tended to believe him. At least until I moved to Italy and learned it was not so simple.

When I arrived in Italy in 1988, it offered ample corroboration of my father’s ideas about government meddling in businesses.

When I arrived in Italy in 1988, it offered ample corroboration of my father’s ideas about government meddling in businesses. Sprawling state-run conglomerates dominated the Italian economy. ENI was the state’s petrochemical giant. Via IRI, a Mussolini-created behemoth, the Italian government produced a mixed range of motley goods, from military helicopters to panettone.

Rife with patronage (Italians quipped they were Italy’s “welfare system”), these uncompetitive and inefficient enterprises were poster children for the evils of state ownership — and socialism.

In 1988, the Socialist Party was one of Italy’s two most prominent, but it was not quite what I imagined. The Socialist’s leader, Benito Craxi, and his entourage led a glitzy, corruption-fueled lifestyle that contradicted my image of socialists as grim conformists in Chairman Mao uniforms. Craxi was cozy with Italy’s business establishment. As prime minister, Craxi bucked Italy’s powerful unions to push business-friendly reforms that made Italy a European economic force.

My first direct experience with socialized medicine came in a state-run maternity hospital in Milan, where I had my first child. I thought of my father often. It was 1992 when Hillary Clinton was formulating her plan for national health care in the U.S. From my rickety metal bed in a noisy six-person ward where there was no toilet paper, I wrote mental letters to her about socialized medicine’s evils.

All the while I was learning, it was not so simple. After all, if I had wanted a single room and toilet paper, I could have paid for a private clinic. Where, if any medical problem arose, I would have been immediately transferred to the better-equipped and staffed state hospital where I already was.

While spartan, the overall experience was positive. The state-provided doctors were tops. In fact, one had trained at the same London hospital as my father. The six-bed ward was actually fun and cheerful. Families decked out in cashmere or dusty work clothes, which would never mix otherwise, shared joy and food.

When I was dismissed, we went straight home, without stopping in at billing. No confusing or exorbitant medical bills followed us. Our annual health tax, which was less than a single birth in the U.S., paid for it all.

If I had wanted a single room and toilet paper, I could have paid for a private clinic.

Italy’s public services are considered a sick joke. Yet, taking Italian trains or sending my children to Italian state schools, I saw that Italy’s State provided basic, solid services to everyone. If you wanted frills, you paid for them. But if you could not, going state did not mean going substandard. Milan’s most highly regarded high schools and hospitals were all public.

Such shared state services throw social classes together in a way America has forgotten. There is no “platinum level” precedence in the Italian hospital or school. Everyone gets a number and waits in line. Italy’s universal services create nationally shared experiences that unify — even if through nationwide griping. Of course, flaws and loopholes abound, but most have cultural rather than systemic roots.

While living in Italy, I was like a fish that does not notice the water. My “conversion” to socialism happened when I returned to the U.S. 30 years later. The Reagan revolution my father fought for had three decades to work its magic. But I couldn’t see it.

When I broke my leg and went to a top academic hospital in the U.S., there was toilet paper. But the doctors were no better than the Italian ones. They were even more arrogant (which is difficult), I had to wait longer to see them, and they were way more expensive. Old-fashioned generic medicines that cost $20 in Italy cost $500 in the U.S. The hospital’s bill was so confusing I was sent to a collection agency and suffered a vicious cascade of troubles.

And don’t get me started on the cost/service ratio of the rare American train. Or how my children’s Italian state schools compared to American public ones. My father died the same year my conversion to socialism began in that Milan hospital. I hope that he would have been intelligent and wise enough to agree with me that socialism might not be so bad after all.