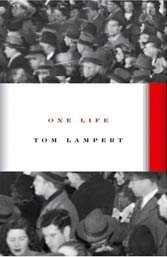 Just when you think that you have read everything on the Holocaust and Nazi Germany and think there is nothing more to say on the matter or no new approach to take to it, “One Life” by Tom Lampert came along.

Actually it is eight lives; eight “normal” — as in not well-known — lives under Hitler. There is a mentally unstable, female Jewish delinquent, a retired “man without qualities” who writes anti-Nazi graffiti in a public bathroom, a dog (with guest appearance by Konrad Lorenz), a high-ranking SS officer and concentration camp chief with “unexplainable” stomach ailments and a well-to-do Jewish liaison in the Theresienstadt camp.

Lampert has turned their personnel and court records into narrative, and occasional poetry. With nothing added, his transcriptions of correspondence interdepartmental memos and rap sheets self-effacingly render the hallucinatory horror of life in Germany and the East from 1939 until even after the war.

Never was pathos made so sparing. The moral complexity of pure chance and the fatality of the inconsequential are made to seem striking. In the end, by letting us peek into the bureaucratic breadcrumbs left on a fatal trip into the woods, Lampert puts readers in front of the scariest question of all: What would I have done then? The book offers no answer.