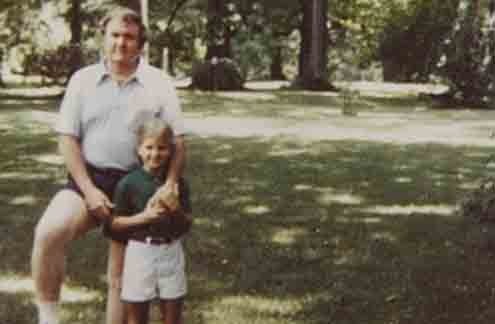 y father is getting married next month. He’ll be 78-years-old when he walks down the aisle, and Connie, his bride-to-be will be 77. So, I guess it’s never too late for love, or union.

I couldn’t be happier for them. I’ve spent the better part of the summer hanging out with them — when time allowed. Their social life outpaced mine. They met on the dance floor, and three or four nights a week, they go dancing — all over Eastern Iowa, to places I’ve never heard of like Polishville (which apparently has some of the state’s best pies).

They share meals, tease each other like teenagers, hold hands at movies and kiss each other goodnight on the cheek. It’s endearing to watch — especially against the backdrop of my own middle-aged shuffle of becoming. They are truly in that stately place of just being. I guess those really are the twilight years.

For however happy I am for my dad, I have to admit that when, at the beginning of the summer, he told me he and Connie were tying the knot, and also selling our childhood home and moving to a cabin in the countryside, I felt a little something catch in my throat. “Oh? So soon?” the motherly daughter in me wanted to say. They’d only been together for a year. But my father had been looking for a companion for a long time. He made it clear a few years after my mother died nine years ago that he wanted another life companion. Specifically, he wanted to get married. I tried to discourage it, or redirect his focus: “But you have us,” I would say, meaning me, my brother, plus a lovely grandson. Or I’d plead, “You should be traveling the world, enjoying what you’ve earned.”

It’s not that I didn’t want my dad to find companionship. I just figured it would be really hard to do so, and I wanted him to focus on what was right in front of him instead. But my father is headstrong, which he was long before I came onto the scene, and he went for what he wanted. He signed up for Catholic singles and also took to dancing, meeting like-minded peers.

On the dancefloor is where he met his first girlfriend after my mother’s death. I understood the attraction: She was charming, intelligent, attractive, fun, and also a decade younger and a little out of reach. They dated for two years — going on trips and spending holidays together. She pruned his closet and took him shopping. I became friends with her, too.

But I could tell something unsettled my dad. Whenever I was visiting, their relationship was usually the first topic of conversation. He’d pour his heart out in a way that was unexpected for such a stoic man. Sitting on the edge of my bed, he’d lament: “I trim her shrubs, take care of her lawn, take her out dancing. What more can a man do?”

I oftentimes didn’t know what to say, so I tried to deflect. “It’s not you. She’s just really independent.” She had once been married —some four decades earlier, and it hadn’t ended well. I honestly think she didn’t want marriage. She wanted fun. There’s nothing wrong with that, but my dad’s heart was breaking for someone who couldn’t make a commitment.

Sometimes with my father, I indulged my own romantic woes as well, sharing things with him that I only would have shared with my mother had she still been alive. And that was the whole point. After all, we were both looking to fill the void of her absence, which made our bond even stronger. Right after my mom died, my dad and I were like the dour-faced father and daughter in “American Gothic,” whose painter (Grant Wood) incidentally lived in the house two doors up the street from us in the 1930s. Even after my dad and I started softening to the world again, we stayed confidantes. We’d always been close, but it was weird to realize that maybe my dad needed me just as much as I needed him.

This stayed true even as I eventually steered my own romantic life in a different direction than his: realizing that I could never really replace my mother’s unconditional love for me in any relationship, I turned inward and focused on self-love for a while. “The most important relationship you have in life is with yourself,” I’d tell my dad, especially when he seemed dejected. I thought my words would resonate: after all, my own au contraire, irreverent streak comes from him.

If nothing else, I reminded my dad of his strength, and he forged ahead. Shortly after he and his girlfriend broke up — but stayed friends — he met Connie. My brother and I were holding our breaths like watchful parents, and to our surprise and delight, this relationship worked.

This summer various people in town — my dad’s banker, his dentist, our neighbors —would tell me, “I hear your dad is getting married. He seems really happy. He came in here one day telling me all about it.”

My dad’s definitely got his groove back. I can dance to that.