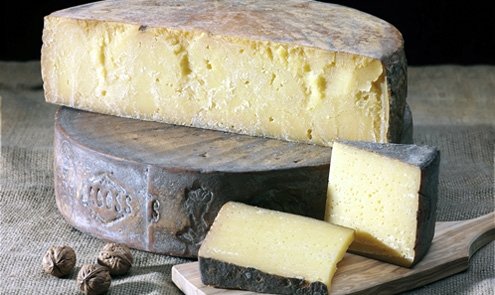 ast spring, my brother Joshua took a break from his studies and visited from Paris. We thought he was coming for the weekend, but in defiance of the Italian proverb “fish and visitors stink after three days,” he immediately announced plans to set up camp for three weeks.

In order to forestall any hard feelings over his epic pop-in, he arrived weighed down worse than a paisano with a veritable cornucopia of Parisian delights: several excellent bottles of Saint-Emilion (a personal favorite), a bag of fresh croissants aux amandes, a passel of pâtés straight from Fauchon, and not one, but two enormous vacuum-sealed bags of cheese.

For those of you licking your lips at the thought of such epicurean palm greasing, don’t be fooled: the gifts were a Trojan horse, my brother a seemingly innocent Sinon, and the cheeses the culinary equivalent of Odysseus and his henchmen.

The fact is that in my family (as I’ve mentioned in earlier “Foodbox” columns), food alliances are laid down along French/Italian lines strict enough to make the battle of Marengo look like a love-in. Joshua’s fromages were a clear statement of position; a not-so-subtle riposte to my recent affirmations that top-notch Italian cheeses could hold their own at any table, his Parisian foldout included.

I’ve been singing the virtues of lesser-known Italian cheeses for some time now, and while I wouldn’t hazard a comparison with Saint John, it certainly has proven a dry argument to wage. People willingly agree on the ubiquitous popularity of workaday cheeses like mozzarella, scamorza, provolone and Parmigiano Reggiano, but when adjectives like “delicate,” “subtle” and my brother’s personal favorite “complicated” come into play, Italy’s cultured curds get invariably demoted.

And yet there are a number of extraordinary, lesser-known Italian cheeses worthy of wider recognition. Piedmont’s Tuma d’la Paja, Puglia’s burrata, some local Sardinian pecorino creams, or Val d’Aostan fontina all come to mind. Out of my long list of underappreciated Italian formaggi, one wonder in particular always stands out: the Bagóss.

Sometimes referred to as the “Brescian Parmigiano,” bagóss is a creamy aged cheese from northern Italy’s lower alpine region. In Brescian dialect, bagóss means “from Bagolino,” a small town in the Brescia province. Traditionally, the cheese is made from cow’s milk drawn from the first spring and summer milking. After a long winter holed up in wooden stables, the cows are brought out to pasture on the high, flowery slopes in the surrounding Canonica, Trompia and Sabbia valleys. This abrupt change in diet sends a rush of fresh mountain greenery through the cows’ four-chambered stomachs and into their milk, conferring a distinctive, delicate and faintly herbed scent on the cheese.

When you find a good hunk of bagóss, those early spring mountain plants are what you taste. Blended with just a hint of saffron (used more to give the cheese its golden yellow color than for flavor), the cheese is pungent without being sharp, and leaves a creamy aftertaste that is faintly reminiscent of fresh herbs and cut grass.

Today, bagóss has become popular enough that production of the cheese continues year round, but the best bagóss are the forms derived from cows being brought out of the barnyard right now. If there is someone to ask, try to find out how long the cheese you’re being offered has aged. Six to eight months is about right for a decent bagóss.

Alas, it’s not always easy to find the good stuff. Bagóss has recently started showing up in major supermarket chains around Italy, but I have yet to taste a supermarket specimen that can hold a candle to the real deal. Your best bet is to look for it in smaller formaggiaio shops where the emphasis is still on quality over quantity.

Another trick is to abuse the cheese (you might want to wait until no one’s looking). Using your thumb, try to press into the cheese anywhere just off the center. A good bagóss should be firm but not hard, just a little tougher than Swiss Emmental, and the divot will slowly spring back to its original form — anything harder than that you might as well put back where you found it.

A bagóss that has been aged too long, or doesn’t meet the usual quality standards, will be both tough and too salty, and you’ll lose the complicated delicacy that makes this cheese stand out from the crowd. Fortunately, this problem is being addressed even as I write: bagóss is currently under review for D.O.P. status, a denomination that will presumably, once approved, guarantee more uniform quality.

As for those big bags my brother brought down, they ended up on the table at a dinner we threw for a group of Italian journalists, who spent the evening eating, making merry and gleefully decanting the virtues of French cheese.

I’m afraid it’s back to the desert for me.