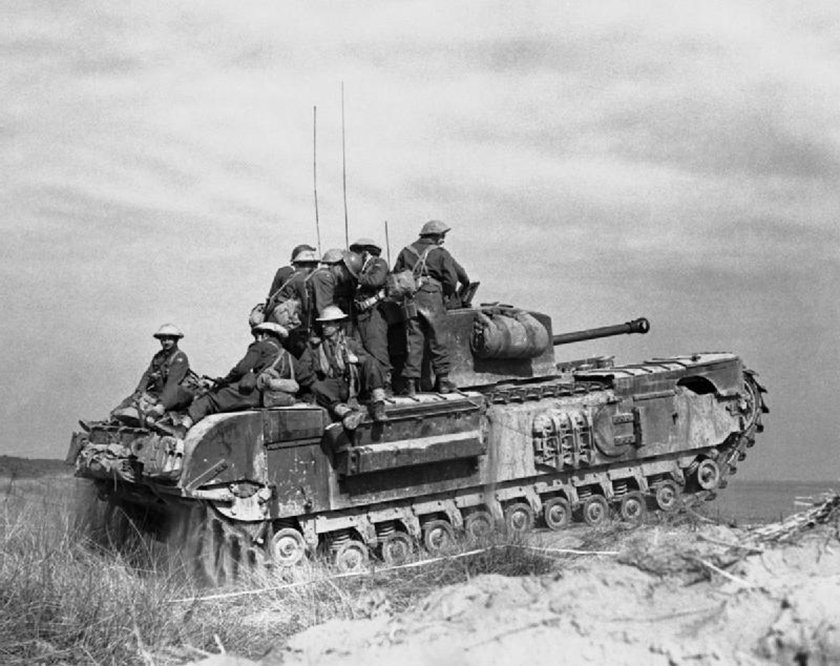 A British tank, with Italian liberation troops clinging on, during the Allied advance from south to north, beginning in 1943.
T

his I know: the picture was taken in 1941 by a Rome street photographer while roaming through the city’s famous Piazza Navona, a tourist attraction before and after World War II. At the time, Rocco, my father, a lance corporal, was posted to the headquarters of the Cavalleggeri D’Aosta, a cavalry regiment. His brother Giuseppe, “Uncle Pippi,” was a truck driver in an infantry regiment. The two had met up in the capital and found a way to spend a few days together. Elsewhere in Europe, the war had already been raging for more than a year, and it was clear that it would not be the Axis blitzkrieg that Italian Fascist dictator Benito Mussolini had hoped for in his grandiose dreams. Italy and Nazi Germany were allies, thanks to the ties between Mussolini and Adolf Hitler.

But war is a messy thing.

Il Duce would remain safe in Rome with his family.

Two years later, on Sept. 9 1943, my father stood with his comrades at the main gate of the barracks of his regiment in Bagnoli, Naples. It faced barracks occupied by a German infantry regiment. A few German soldiers were also in front of their caserma, looking at the Italians, puzzled, probably suspicious. No less perplexed was my father as he kept observing the Germans, allies until the day before. But with Mussolini now out of the picture, what were they now? And how did they regard Italian comrades who until this break had been their equals?

Still allies, but no longer belligerents, possibly even enemies? Ambiguity is too modest a word to describe the situation that day and on the days to follow.

My father could not help thinking over how it all had begun. He was in Rome, already mobilized, when Mussolini had declared war on France and Great Britain on June 10 1940. For weeks, rumors had circulated that il Duce was going to make an important speech from the balcony of Palazzo Venezia, his Rome headquarters. For months there had been a “chill in the air,” as Anglo-Irish expatriate writer Iris Origo wrote in her war diary from La Foce, her estate in Val D’Orcia, near Siena (her eponymous book,”A Chill in the Air, An Italian War Diary 1939- 1940,” was published in 2018 by Pushkin Press). Citizens had been summoned to Piazza Venezia to hear the speech, which would also be aired on radio, many of these bulky boxes set up in public places, outside bars, and in private houses. When Mussolini made his declaration, the crowd was jubilant. My father recalled looking in disbelief at the enthusiastic men and women around him, wondering whether they were really conscious that it would befall them to do the fighting. Il Duce would remain safe in Rome with his family. And his lover.

The author’s father, left, while in Rome. Who to fight for, or against?

Three years and three months later, by the time my father found himself facing the Germans in Naples, the huge hailing crowds had long disappeared. The war was evidently lost and hundreds of thousands of families were mourning their dead. The Allies had landed in Sicily and elsewhere in southern Italy, and were pushing their way north. Naples and most major Italian cities were bombed by American and British aircraft daily. In my father’s memories (and nightmares), U.S. B-24 Liberator bombers would arrive in formation, their aluminum fuselages glaring in the sun. After their forays, particularly in Naples, a large swath of city was no longer standing. Where schools, churches, elegant buildings, or slums had once been, all that remained was rubble, disemboweled flats with household effects dangling in thin air. To quote T.S. Eliot: Ash on an old man’s man sleeve…

On Sept. 3 1943, representatives of Gen. Pietro Badoglio, the head of the Italian government following Mussolini’s July 25 ouster, met with American Allied commander Gen. Dwight D. Eisenhower in the Sicilian city of Cassibile. Though they signed an armistice, Badoglio delayed any mention of the deal for days, rightly fearing the German reaction. On Sept. 8, Eisenhower took initiative and made the announcement at 6:30 p.m. Italian time on Radio Algiers. One hour later Badoglio issued a similar declaration, but using the Byzantine twists Italian bureaucrats swear by: “All acts of hostility against the Anglo-American forces by Italian forces must cease everywhere. But they may react to possible attacks from any other source.” Who these “other sources” were, it wasn’t hard to deduce, since Italy was still filled with Nazi troops. But who was going to lead the Italian army in a possible conflict with Wehrmacht divisions? Throughout the country, Italian officers had fled their barracks.

Director Luigi Comencini would later perfectly describe the atmosphere of those days in his film “Tutti a Casa” (“Everyone Go Home”) with Alberto Sordi and Eduardo De Filippo.

My father and his comrades retreated inside the Bagnoli barracks, just in time to learn that Italian King Vittorio Emanuele III, the royal family, Badoglio himself, the general’s staff, and all members of government had ignominiously fled Rome.The Italian Armed Forces were left without commanders and orders. The soldiers just disbanded. Tutti a casa.

After a brief consultation, my father and half a dozen of his comrades, most of them from his native Salento, put on civilian clothes, hurriedly tucked some provisions in a couple of rucksacks and left Naples, heading south, a 450 kilometer journey home on foot. They marched for days across the valleys of the Apennines, always on the lookout, their ears to the ground, because the roads were filled with long lines of German military vehicles and tanks withdrawing north, toward the fortified Cassino Line.

It was at Monte Cassino, a mountain abbey, where the Germans staged their final bloody stand. Rumors were already circulated that the Germans would round up all Italian soldiers (all able-bodied men, actually) to send them to work in Germany, or shoot them, if they refused to cooperate.

My father poked at it with a long pole. It did not explode.

Not far from Benevento they stumbled across a strange object in the middle of a railway line. From afar it seemed a sort of bundle. They were hesitant. It could be a trap, even an antipersonnel mine. There was no other way round, they had to cross the railway line or make a long detour. Tired, they threw caution to the wind.

My father warily walked up to the object and, lying on the ground, poked at it with a long pole.

It did not explode. It was soft. Inside it he found four rabbits, already skinned and drawn. They were hungry, the scarce provisions they had gleaned in Naples had long ago run out.

The night found them on a hillock, near a farmhouse. A feeble light filtered through the shutters of a window. They knocked at the door and the light went off. They knocked again, explaining that they were Italian soldiers on the run. The door opened and an elderly peasant appeared, his wife behind him. My father exhibited the bundle. The old lady took it and prepared a meal, throwing in a dozen big potatoes. Bread and a carafe of wine were laid on the table.

Two weeks later, my father reached Alezio, his native village in Salento. The family had no news of his brother aside from knowing he had been posted to Yugoslavia in 1942. It took about two more months for uncle Pippi to get back home. After leaving the Dinaric Alps, hunted by the Chetniks and Tito’s partisans, he and his company managed to reach the coast, from where an Italian vessel ferried them to Ortona, south of Pescara. From there, he marched the almost 500 kilometers home. Upon their arrival, my father and Uncle Pippi reported to the local military headquarters and were enlisted in the Italian Liberation Corps until 1946, when they were discharged.

Finally, the war was over.