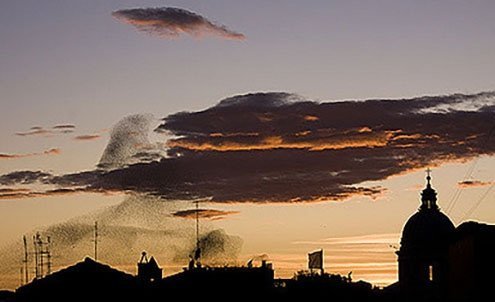 Starlings over Rome: one leader can determine the fate of the flock.
A

mong other things, I teach abnormal psychology. I have often thought that my course should be obligatory for political science students. I was about to add ‘especially in these times,’ but I guess all times have had their certifiably insane leaders.

What I am about to write, however, is not about politics, in the sense of political parties and factions. It’s about how a person can become a pernicious leader (or boss or parent or partner).

I often mention Konrad Lorenz. He wrote an interesting thing about flocking animals. If you’ve lived in Rome more than a year you will have seen the mesmerizing clouds of starlings (storni) that form and reform constantly as they move in cloudlike formations in absolute precision and harmony. How do they decide how to move? Does a majority bring along the others? Lorenz pointed out that if one bird, any bird, made a strange movement — maybe an avian sneeze, or a peck at a nearby bug — all the other birds would follow suit, in perfect synchrony. If the flock had a deranged starling as a leader, they would all follow that leader.

Perhaps you can already see what I’m getting at.

How can the study of ‘abnormal psychology’ provide insight into human leaders who qualify as deranged “starlings’? Some might be considered sociopaths, killing without remorse or conscience. Others might be paranoid, fearing ‘the enemy’ is out to get him — or his country. But the one that most interests me is the person (leader, boss, parent, partner) who seizes any opportunity to acquire power over others as a way of maintaining their own sense of worth.

In my column “Precariousness,” I mentioned a book by Daniel Shaw who studied how cult leaders manipulate their followers. Shaw described the particular form of malignant narcissism that psychologically subjugates others both in cults and abusive relationships.

We use the word “narcissism” in everyday life to describe people who seem annoyingly full of themselves. They think they’re smarter, more successful or more beautiful than anyone else and need to emphasize it in every possible way.

But in my field we see the phenomenon as more complex. While it’s hard to feel empathy for such a character, everyone has a story. In the case of narcissism, it’s the story of someone who wasn’t loved for who they were when they were growing up. They may have been praised, but only in terms of what was important to their parents, usually something that made the parents look good. These kids were often left feeling that they’d lose all this recognition if they didn’t measure up to these parental expectations. Others may not have had any recognition of any kind. Some people burdened with this history end up feeling empty and depressed. They talk but can’t engage. It’s often hard to follow what they say.

Other narcissists fill their emptiness with bluster and grandiosity. They enrage or hypnotize us. They look through us and don’t hear. There are those who are not content to simply draw all the attention onto themselves. In the most extreme cases – that of the malignant, traumatizing narcissist — the need is greater than simply occupying all the space in the room. There’s a need to subjugate others. They seek the sacrifice of the other’s self before the altar of their grandiosity. The narcissist does this to avoid feeling an underlying dependency (see ‘Winners and losers’) that is no less strong than an addiction. If the other is dependent, they can feel independent. So they subjugate their partner, their children, their employees — or their own political followers.

Such leaders induce shame (others are losers). They are also delusionally infallible (they own the truth). They attribute their own addictive dependency and resulting shame to the other.

For many narcissists this becomes a see-saw, tipping between being up and being down. But when power, real power enters the picture, like political power, the see-saw remains up, lifted by the weight of dependents, followers, subjects. Made to feel ashamed of their dependent status, these followers can only acquire self-esteem by denigrating others. Witness racism, sexism, and other attempts to boost a vulnerable self.

One deranged starling can bring the whole flock with it. Sometimes it does.