One but not likely done 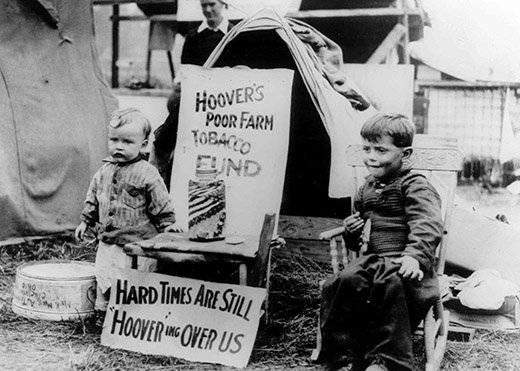 In 1932, Army veterans and their families came to demand bonuses for their World War I service. Under siege following the Great Depression, Hoover was beaten by Franklin D. Roosevelt in November.
M

y Polish-born mother had two unassailable pet theories, that mortality would ignore you if you refused to acknowledge its existence and that vision improved with age. So steadfast was she in these beliefs that they conspired to vex both her and her progeny. She died at 67; her son contracted blinding glaucoma in middle age.

Another pet theory, this one far more widely held than my mother’s duo, is that urban indignation — almost always progressive — can nip any contested American presidency in its first-term bud.

But all too often, the promoters of such indignation, to them steadfastly justified, are cornered and eventually trampled by voters in the thrall of entertaining, Trump-like underdogs who portray themselves as victims of conspiracies engineered by partisan elitists.

The barbaric yawp of today’s political “debate” aside, history does little to support those convinced Trump will soon sink under the muck of his own making.

Almost inevitably, American presidents who win a first term are re-elected to a second, though not always convincingly.

Jimmy Carter stood no chance against Ronald Reagan in 1980, and newspapers had a field day.

The exceptions have had far less to do with scandal or dishonesty than cash flow.

In 1932, incumbent Iowa Republican Hebert Hoover fell afoul of the Great Depression. Polio-stricken Franklin D. Roosevelt, an innovative if complicated Democrat, took over and soon became something of a national father figure. His remarkable four-term “reign” (he died in 1945) resulted in a constitutional amendment limiting the presidency to two consecutive terms.

Republican Richard Nixon, long despised by the progressive media, also won two terms, the second with pulverizing ease. Mocked in East Coast bastions, he had little trouble with the rest of the country, which he called “the silent majority.” Then came Watergate.

Two years after Nixon’s resignation, in 1976, Democrat Jimmy Carter promised to erase that ugly legacy (and tame soaring gas prices), but, like Hoover, was unable to escape the shadow of an ever-deepening economic downturn and a number of questionable foreign policy choices regarding the Soviet Union and Iran.

History does little to support those convinced Donald Trump will soon sink under the muck of his own making.

Former Hollywood actor and one-time Democrat Ronald Regan, deeply disliked by city liberals, easily won two terms of his own. His staunch conservatism was offset by his film industry-era charm. Had his mental alertness remained intact, and had it been permissible, Reagan might have won a third term.

His successor, George H. W. Bush met the fate of Hoover and Carter as economic tidings grew dim and dimmer during his term.

In 1992, he faced Bill Clinton, an aggressive but engaging liberal who all but left him speechless.

Womanizer Clinton also won twice, though sexual scandal tainted his legacy in a way that still endures. But before that defining black mark even enemies respected Clinton’s relaxed, quick-thinking mannerisms.

George W. Bush, whose year 2000 victory took months to confirm, received Islamic terrorism’s abject blessing when New York City and Washington were attacked. Bush waged war against both Afghanistan and Iraq, though the motives of the Iraq campaign was later questioned. Bush’s support soon waned and he seemed to some a likely addition to the Hoover-Carter-Papa Bush troika.

But he vexed doomsayers by winning again in 2004, leading some despairing liberals to vow Canadian exile. Few, if any, actually left.

Barack Obama, the unlikeliest presidential winner in modern times, saw much of his glamor erased over the course of his first term. He faced furious backlash from the so-called Tea Party movement and those, including Trump, who questioned his American “authenticity.”

Yet, in both 2008 and 2012, he defeated dignified Republican opponents and served out his two terms.

But Trump is a different animal. More than a 21st-century president, he resembled a self-made and self-promoting late 19th-century business tycoon. He sees what he wants and says what he wishes, proudly oblivious to party norms and protocols.

To well-meaning progressives, America is a nation always poised on the brink of “do the right thing” change.

Yet most criticism directed against him is still rooted among those who resisted Nixon, Reagan, and the younger Bush. No national consensus has so far underscored his shortcomings. To his supporters, he is merely the latest victim of liberal scorn.

Those who deplore his decision to run the White House like a small family business — following gut-level urges and hunches, hiring and firing at will, and seeming to make up both policy and facts — are offset by many who find such behavior bold and anti-political in the most admirable of ways.

But if his approach to the presidency is unique, the liberal belief that enlightened urban thinking, and voting, can unseat such uncomfortable figures is not. New York and Washington (the short list also includes cities such as Boston, Chicago, and Los Angeles) have always believed their collective cultural intellect, and ethos of open-minded inclusion, carried special weight. But aside from how they’re perceived globally, they do not.

Instead, American voters have time and again backed more traditional two-term continuity. Add to that the fracture within the Democratic Party, still split between progressives and centrists, and the task of challenging Trump, no matter the name of the standard-bearer, becomes even more daunting. Hoover, Carter, and Bush elder each seemed out of touch with their country’s economy. In FDR, Reagan and Clinton, they also faced lively, personable opponents.

The prospect of Trump running against Elizabeth Warren, (ailing) Bernie Sanders, or apparent front-runner Joe Biden is uninspiring at best. Any of these candidacies would have much in common with John Kerry’s 2004 wishful thinking attempt to unseat Bush. New York, Boston, Chicago, L.A. — “all” were with him.

Jimmy Carter stood no chance against Ronald Reagan in 1980, and newspapers had a field day.
In 1992, facing Bill Clinton, incumbent George H.W. seemed at a literal loss.

“Help is on the way,” went the Kerry campaign mantra. But none came.

That Biden is now under direct attack by Trump (and that Trump may have tried to connive against him) would suggest Biden poses a credible threat. Don’t count on it. He’s from Delaware and carries considerable Obama “luggage.”

The heaviest burden borne by American liberals and progressives is the belief that presidential elections can turn on educated, and usually urban, disenchantment. They are ever hopeful that the country is, or should be, the sum of its chaotic but forward-thinking city-dwellers. To them, America is a nation always poised on the brink of “do the right thing” change. In fact, it’s a largely conservative nation that admits change when it senses its been bullied or its citizens feel financially shortchanged. Cultural change, a sure-thing in Brooklyn, is no sure thing in Kansas (and never has been).

“Yes we can,” shouted the Obama millions, and they did, at least electorally. Yet racism and ethnic bias never vanished, and by the end of his eight years the slogan rang hollow. That hollowness has yet to beset Trump’s “America First,” because as much as he is a president, Trump is also a reality show host. And the Trump Show, with its once-in-a-lifetime master of ceremonies, doesn’t seem ripe for cancellation any time soon.