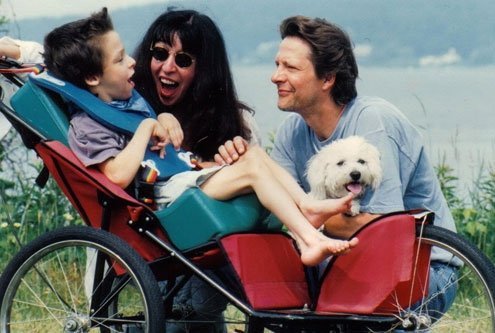 Jesse Cooper died at age 17 in 2005, but not before living life to the fullest.
M

arianne Leone is a force of nature. She’s feisty and friendly, eager to laugh or frown. She doesn’t think twice before sharing any number of brutally honest and often shrewd observations. I meet her over breakfast at a film festival in Capri. I’m an entertainment journalist and she’s an actress. That by itself should preclude anything but polite smiles and politically correct chitchat. Her highly expressive and familiar face appears from behind a blonde bob and bright red lipstick.

The Boston-born Leone was a recurring figure in the HBO series “The Sopranos,” where she played the mother of the Michael Imperioli character Christopher Moltisanti. She’s also the wife of Academy Award winning American actor Chris Cooper (“American Beauty,” “Adaptation”), who today sits by her side, quietly amused by her energy. They’re clearly in love.

Cooper passed Leone’s first serious dating test 30-odd years ago. “I took him to see Fellini’s ‘Le notti di Cabiria,'” she tells me. “I needed to see his reaction. When he emerged from the theater teary eyed I knew he had a kind soul.”

Leone and Cooper had a child together, Jesse, who will soon become the centerpiece of our conversation. I find a combative, generous mother, who is proud of her son and thrilled to share his accomplishments.

Over cappuccino I also learn that Leone’s family was originally from Sulmona, in central Abruzzo, and that her Italian mother emigrated to the United States at age 18, carrying with her a vast array of Catholic beliefs that permeated Leone’s childhood and contained a mix of Catholicism and mysticism. In was common practice to work to ward off the malocchio, the evil eye, and to pray a large number of saints, each one with its own jurisdiction and therefore a deity in his or her own right and each one with a statuette on her mother’s dresser. If any of them failed to deliver on a prayer or promise, their faces were turned toward the wall.

These stories delight me. I’m Italian and it’s easy to find the irony in our shared cultural heritage. Moreover, Leone is a born storyteller. Leone and Cooper are on their way to visit her relatives in Sulmona. Embarrassed, she admits to hiring a driver for the trip. She would have taken trains and buses but they’ve brought along too much luggage. “We packed way too many clothes,” she explains with a smile. “We were afraid of making a brutta figura.”

I assure her hiring a driver is nothing to be ashamed of. I am, in fact shocked. Public transportation is not in the vocabulary of any Hollywood actor that I’ve ever met. Nor is admitting to having packed too many clothes.

Then the subject turns back to Jesse, an honors student who wrote poems and loved windsurfing. Born three months premature, Jesse developed a cerebral hemorrhage and cerebral palsy. He later became a quadriplegic and struggled with seizures. “They told us Jesse was never going to be intellectually normal. But in his last year of school he studied Latin.”

Throughout his short life, his parents struggled to get him what should be every disabled youth’s basic right, an education, a right too often withheld. That effort is at the core of Leone’s moving, funny and compelling book, “Jesse: A Mother’s Story,” first published in 2010 and reprinted a year later.

Jesse’s life was made all the more complicated by his inability to speak, which locked him into his overall condition. Communication was a challenge for both parents and child.

“When he was seven,” says Leone, “Jesse was reading his first grade book on a computer. We got to the sentence, ‘We wanted to fly the kite but the wind was too strong,’ and I asked him to show me what word in that sentence described him best. Over and over again he hit the word ‘strong.'”

Despite his condition, Jesse learned to communicate via computer and although he used a wheelchair he learned to ride horses and took up water sports at camps for disabled kids, which led to his love for windsurfing.

Jesse Lanier Cooper died in 2005 at age 17, after a lifetime that by itself represented a display of strength. When he was born, Leone and Cooper were struggling actors living in a modest apartment in Hoboken, New Jersey (she’d spent her 1987 pregnancy in a tiny sixth-floor walk-up in Manhattan’s Hell’s Kitchen).

They faced an immediate challenge: medical bills. The couple later moved to Kingston, Massachusetts, near Boston, where resistance came in the form of their son’s disability, which public school at first balked at taking on. But Leone persisted.

Her book brims with what can only be called unconditional love. Amor vincit Omnia was one of the Latin sentences Jesse was able to translate in ninth grade. “Love triumphs over all.”

The Jesse Cooper Foundation, created by his parents, backs support for disabled children in U.S. public schools through the Federation for Children with Special Needs. It also works to create sports for the disabled through AccessSportsAmerica and has global reach through Romanian Children’s Relief/Fundatia Inocenti, which works to assist disabled orphans in that nation.

A line from one of Jesse’s poems reflects his legacy, as well as the resolute attitude of his parents: “Courage is like one ant trying to cross a roaring stream. It may seem impossible, but you have to try.”