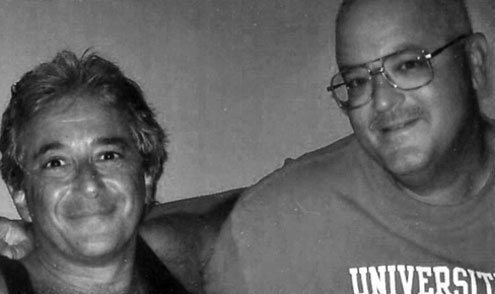 Once they were boys, in a classroom.
W

hen hormones came due, the verb of us was roughhousing. Push came to shove atop a small knoll on the fringe of the playground, the barely teen girl we both liked watching beside her friend, both of them giggling. This was new since we never fought. But 13-year-old boys are larval adults colored by excitement, dirt and broken bones.

The fight came to nothing and the bell rang and the girls left and we walked home together. We were friends, and he was my first.

We met in September 1965 in a junior high school classroom in a big redbrick building in northwest Washington, D.C. I was terrified to suddenly find myself in the chaos that is American seventh grade. I had pleaded with my father to spend the first day beside me, to no avail. In homeroom, a new concept, I behaved like an aging monk praying that the universe would leave my and my anxieties alone.

This is when the heavy-set boy sitting beside me introduced himself. He stuck out his hand. He didn’t want to be a stranger, he said. This is how I met my best friend. He willed it.

The small act turned into a conversation, which the teacher, a man named Mr. Flowers, a believer, he said, in “the scientific method,” seemed to encourage. He had a benevolent smile and a deliberately kind manner. We both agreed to like him. And this was new: Having someone to share with, to talk to, a living listener amid the whooshing of young bodies desperately trying, most of them, to mimic adulthood.

Not us, since we couldn’t. I was tiny, a reed of a boy, and he thicker, and we were mocked. I resigned myself. He found the antidote.

At recess, we’d band together with fellow outcasts and play touch football. The bigger, more athletic, preening boys played on the school’s vast main field, so my friend marshaled the rest of us to a corner, where we established routine and ritual. He’d play quarterback, vexing those who scoffed, and I’d be the boy who ran like the wind, arms outstretched. He’d invariably drop the ball into my hands, my defender beaten. I was amazed; he was confident. “Told you,” he’d say. He had. Until his ambition overturned me, I’d just moped.

Came a time, later, when the sleek and popular boys, in need of add-ons, included us in their exclusive game. He threw precisely. I caught what I could. The mocking diminished.

He was a Boy Scout in a local troop and invited me to join. Still nervous around others, I hesitated. But he won me over. He taught me my first lessons in belonging. He did it by leading. We raced through the ranks to Eagle Scout, our egos on the line, and he won, but I got there, too, since he’d taught me to prize competition. I liked winning. I liked succeeding. I liked camaraderie. I hadn’t known this.

Against the bullying of the time we, the two friends, didn’t offer up parents or excuses or self-pity. We sought solace in our friendship and decided that ridicule existed only to fortify us. I lived with a single father, he with family of brothers and a mother as stern as a rocket. His father was a doctor and he wanted to become the same. He knew he’d be good at it.

Youth is helped by such knowledge, no knowing where it comes from. Inner strength lacks a guidebook. He believed that any odds against him were as ridiculous as the idea he couldn’t beat them. This he also taught me, or maybe he coaxed it out.

Years later, it would take him several tries before medical school agreed with his certainty. At the same time, after my journalist father’s death, I tried following in his footsteps, an effort also filled with rejections. As they piled up, I always thought of him. It didn’t matter that he was in Washington and I in Rome. We were friends.

And so we remained. He married and had three children — girls — following a life plan he’d laid out in the first weeks of our acquaintance. Shy, cautious, self-absorbed, I took another road, resisting everyone but me. My relationships failed, perhaps by choice.

He was, and is, an exceptionally giving father and his professional life, his doctoring, superlative. I look at him now, still married, still resilient, his children successful adults, and see the same stubborn, optimistic resolve of yesteryear. A man with a plan, as Americans like to say, a plan that is anchored and lasts.

Monday is his birthday, and not far behind it comes that of our friendship, which will turn 48. When we meet, we talk and talk, gripe and laugh, as friendly to hopefulness and compassion — and to each other — as we always have been, and I’m thankful.