Once upon a Euro 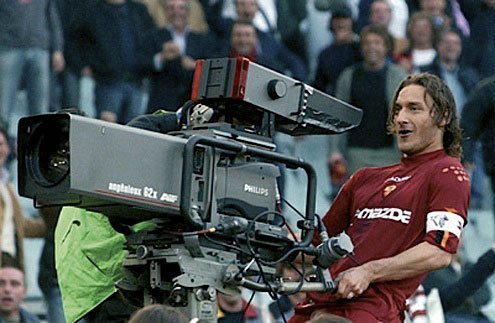 Italy’s Francesco Totti, exulting after scoring for AC Roma, is the straw that stirs the drink for the Italian national team playing in Portugal.
I

f life — and soccer — were fairer, Italy would be traveling to Euro 2004 in Portugal as the reigning champion. But sadly for Italy, it must reckon with a July night in Rotterdam four years ago. The Azzurri led 1998 World Cup champion France 1-0 in the waning moments of injury time.

Then, incredibly, the French drew level on arguably their final sweep toward the Italian goal. Emboldened, France won 2-1 on David Trezeguet’s Golden Goal in the extra period.

“Beffa!” cried despairing Italians, and they had a point.

Even this reporter’s English heart was moved by the cruel irony of it all. For once Italy had abandoned its defensive instincts and taken a beautiful game to the opposition, attacking the mighty French — and for this it was rewarded with the guillotine.

At Euro 2004, which runs from mid-June to early July, the Azzurri have a chance to exorcise that poltergeist, along with the ghost of South Korea, which knocked Italy out of the 2002 World Cup.

As usual Italy begins among the favorites. On paper, it has the continent’s finest collection of footballers.

They include Juventus goalie Gianluigi Buffon, Milan defender Alessandro Nesta, midfielders Andrea Pirlo of Milan and Francesco Totti of Roma, who is widely acclaimed as one of the world’s best players. The team has so many top strikers it verges on the ostentatious: Filippo Inzaghi, Alessandro Del Piero, Christian Vieri, Antonio Cassano. The team is so deep that some players Coach Giovanni Trappatoni leaves at home would start for other top national sides — Totti, Buffon, Nesta, Del Piero and Vieri were all named among Pele’s top 100 players of all time in March.

Italy, which often makes soccer into a national melodrama, should also be motivated. The media roasted both Trapattoni and his players after the 2-1 World Cup loss to South Korea, a game in which Ecuadorian ref Byron Moreno expelled Totti and instantly became something of a national villain to Italians. Plot theories abounded, abetted by Trapattoni, affectionately known as “Trap” or “The Trap.” “It was obvious from the start which way the wind was blowing. I don’t want to talk about conspiracies, but there were negative situations,” he said at the time. The sports daily La Gazzetta Dello Sport printed one message on its front page: “Che vergogna!” The world governing body, FIFA, investigated Moreno and his home federation sacked him this year.

Italian club team players may have something to prove this year. Club giants Milan (the defending Champions League titleholder and this year’s Serie A champion), Juventus, Inter and Roma were all dumped out of European competitions this year, perhaps adding to the appetite for summer silverware.

Still, Italy has not won a major title since the 1982 World Cup in Spain — dropping the 1994 Cup final on penalty kicks to Brazil — despite the presence of such greats as Roberto Baggio, Franco Baresi and Paolo Maldini. Italy last won the European crown in 1968.

That drought, and the talent pool, puts pressure on 64-year-old Trapattoni, who resisted media pressure to resign following the Korean debacle. Already, outgoing Juventus coach Marcello Lippi has been publicly tipped as Trapattoni’s eventual successor, the only remaining question being the timing of the transition.

If Trapattoni fares poorly in Portugal, the likely answer is this summer.

Yet the coach from Lombardy — known for his colorful wordplay — has so far proved an able manager of egos, and the press. He has won more league championships than any other Italian coach in the game: six with Juventus, one with Inter and one with Germany’s Bayern Munich.

But the Italian media is a powerful engine of football change, and some commentators feel Trap’s vision of the sport has worn out its welcome. The sports press’s favorite insult for Trap, a defender in his playing days, is that he’s a “catenacciaro,” a disciple of Italy’s traditionally suffocating style of play. While “catenaccio” — protecting your goal with a “padlock” of defenders and hitting your opponent on the counter-attack — worked well for decades, most agree that the philosophy is both less effective and less entertaining than the attacking approach now embraced by the Spaniards and the Dutch.

Trap seems to have sensed a need to modernize, at least a bit. He was bolder during the Euro 2004 qualification campaign than at the World Cup. At times, Italy fielded four attacking players and defeated Wales 4-0 in a key game, a rare high goal total for an Italian team. Still, there’s residual concern that Trap’s defensive reflexes will return when Italy is pitted against a big gun or is leading 1-0 in a key knockout stage match. Under pressure, he’ll pull an attacker and add a defender, pundits say.

Then there’s the vanity of his multimillionaire players to deal with.

Soccer stars, particularly strikers, are generally self-involved, each one seeking the limelight. The hulking Vieri and the mercurial Cassano are both temperamental, giving Italy an additional headache that teams with less talent but more solidity (England, say) don’t face.

But gloom isn’t in order.

Italy faces Bulgaria, Sweden and 1992 European champions Denmark in the group stage, which runs through late June; the top two teams advance. While these are are unpredictable opponents, Italy should push forward into the quarterfinals. The finals are set for July 7 in Lisbon.

From then on the Azzurri have got as good a shot as anyone, if not a better one. “I am confident,” says Trapattoni, “and the fans should be as well.”

(Greece won the championship, defeating host Portugal 1-0 in the final. Italy was knocked out in the preliminary round. Trapattoni resigned and was replaced by Marcello Lippi.)