Once upon a cuckoo’s nest 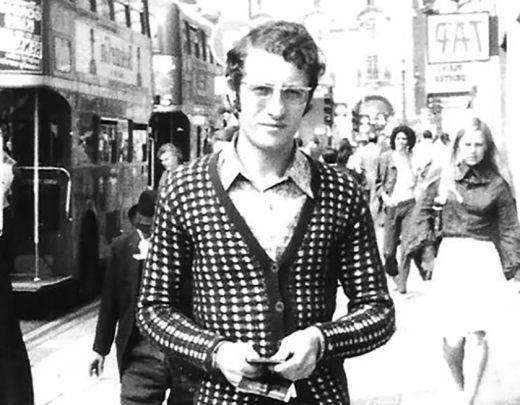 The author on Regent Street in London in 1973: a long way from Lecce….
S

o this was London, Victoria Station. A cacophony of sounds and noises and voices, voices of crowds, voices streaming out of loudspeakers, announcing departures and arrivals, requesting attention, giving instructions.

I was almost overwhelmed as I stepped out of the train. A porter with his barrow soon rushed to help me, as I advanced along the platform, overloaded like a Mexican mule, and he kept chirping all the way, in strict Cockney. Much to my desperation, I couldn’t understand a single word. After having studied English for 10 years, in June 1972 I persuaded myself that I could manage to travel to London and spend a few months there, working somewhere and improving the language I had been toiling upon since childhood. But what I was listening to sounded absolutely barbaric. I could have landed in Kathmandu, the result would have been no different. Luckily, things improved at the Tube ticket booth, much to my relief. Not only was I able to buy a ticket but also to get all the necessary information to reach my destination, Weirdale Avenue, London N. 20, where Gino and Pina, my father’s cousins lived. YES, I could speak, and understand English! 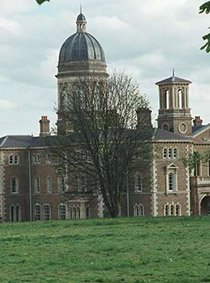 A view of the Friern
Barnet psychiatric hospital, before that known as the Colney Hatch Lunatic Asylum. The hospital closed in 1993.

To get to London I had spent two days and two nights rocking in a train, crossing Europe from Lecce, in my native Salento, traveling via Milan, Lausanne, Strasbourg, and Calais. Then a ferry ride to Folkestone and another train to London. I hadn’t slept a wink in almost 48 hours. When I got to the Weirdale Avenue address, I fell asleep in the bathroom, sitting on the toilet, while Gino and Pina were preparing my first English dinner. Gino had promised he would help me find a job at the hospital where he worked as a pastry cook. And in fact, a few days later, he accompanied me to Friern Barnet Hospital for an interview he had arranged for me with the staff manager. “You know,” Gino told me while parking his Ford Cortina hardtop, “it’s a mental hospital, but you gonna be all right.”

Friern Barnet Hospital, originally known as Colney Hatch Asylum (a name that in London came to be synonymous with mental institutions), had been established in 1851 and continued to operate until 1993. In the 1970s it was still a huge institution, with more than 1,500 patients and, between fulltime and student nurses, a staff of around 300. The hospital extended in length and the main corridor, connecting the Camden, Islington, and Haringey sections, was one mile long. It was surrounded by a large park, with lawns, thickets of oak trees and was infested with squirrels. In the past, the hospital also ran farms, situated far at the back of the facility, which provided meat, milk, butter, and vegetables for the institution. During World War II, people from nearby districts would turn to the hospital to have an extra milk ration for their children. However, the Blitz did not spare the asylum. Several wards were bombed and 36 patients and four nurses lost their lives.

The interview was a success and I was taken on as nursing assistant. The title scared me a bit, but I was told that all I had to do was to help the patients to get properly washed and dressed in the morning and assist staff nurses in supervising at meals. I also had to lead the patients to the clinical laboratory for routine tests, or to the various workshops where many of them were occupied in various activities for recreational and therapeutic purposes. Actually, a certain number of the patients were not in need of psychiatric help, but were just elderly people in difficult circumstances who had nowhere else to go.

“It’s a mental hospital, but you gonna be all right…”

The most common mental illnesses were depressive mania and schizophrenia. Some of the patients were free to move about the hospital and even to go out for the day and return at dinnertime. But a few wards were constantly locked, because the patients there had to be constantly monitored. Some had been hospitalized after being sentenced for murder, on occasion even more than one murder. The first time I worked in one of these wards, the charge nurse told me always to lock the door behind me and “never turn your back to anyone not wearing a uniform.” One of the people institutionalized there towards the end of the 19th century was Aaron Kosminski, suspected of being Jack the Ripper. Until the 1960s, lobotomy and electroshock had been widely practiced even at Friern and I met several patients who had been lobotomized, many reduced to zombies. One day, after lunch, I suggested to some of the less active patients that they might need to go to the bathroom. One of them did not come back and after waiting for a while, I went into the bathroom to inquire. He was there, standing in the middle of the room. I asked him why he hadn’t come out. “You didn’t tell me,” he replied numbly. 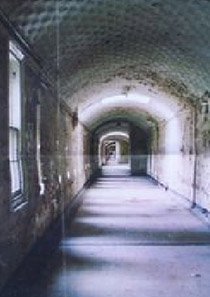 Only a few wards still had dormitories, but the majority had been completely refurbished and patients slept in single or double rooms. Each ward had a large hall, with several armchairs, where patients could sit and watch television or play draughts or chess. The hall opened outside into a walled garden. I loved to talk to the patients, at least with those who were not constantly under the soporiferous effects of Largactil, designed to treat schizophrenia

Soon some of them became quite fond of me and looked forward to my next shift, so they could play chess with me. One of them was absolutely invincible at chess: nobody remembered if he had ever been beaten, and he had been there for ages.

A couple of years later, I came across a book in London ponderously titled “Psychiatry for the Poor: 1851 Colney Hatch Asylum-Friern Hospital 1973: A Medical and Social History.” The book contained several pictures of the patients, dating back many decades. I was shocked when I recognized some of the patients I had met there. In the pictures they appeared much younger, of course, and the thought that they had spent most of their lives in that dreary place moved me deeply. Once I happened to lose a patient. I was leading a group of them to one of the workshops when I noticed that after turning a series of corners, walking in the endless corridors, a patient called Harry was missing. I immediately informed the ward, but the man managed to get out of the main gate unnoticed. The charge nurse told me not to worry, because he had already fled more than once and the police had always brought him back to safety.

I spent a couple of sleepless nights over this, but two days later the Mill Hill East police phoned to announce that he was there. A police car arrived to collect me and we drove to the station to bring him back. When we got there, I saw Harry sitting at a table, eating biscuits and sipping tea, in the company of a couple of grinning officers. As soon as he saw me, he cried, “Oh, nurse! At long last. Where have you been?”