Once atop the Pompidou 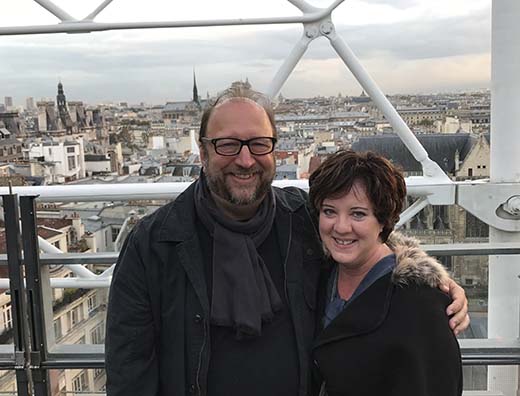 The author and his travel companion atop the Centre Pompidou in Paris. Photo courtesy of Sam Shepard.
W

e met Kevin and his partner Scott in the vast public plaza outside the Centre Pompidou. It was a crisp October day. The sky was blue. We all wore scarves and coats and sunglasses, looking posh and feeling French.

Kevin and Scott had inherited an apartment in le Marais that was a fifth-floor walkup without its own WC. They came over a couple of times a year to check in on the place and fix what needed fixing, which meant taking trips to the French equivalent of a Home Depot in Les Halles and buying household items for DIY repairs. Our visit happened to coincide with theirs, so we decided to meet up at the new museum in the old city.

I say “new.” The Centre Pompidou was built around the time I was still in high school. At the time, it broke the mold, literally, for what a museum and performance space should or could look like. Its innards were pulled out into the open to make room for more art and performance space on the inside. The air-conditioning ducts, the escalators, the water pipes, the electrical conduits, all attached to the steel girder erector-set superstructure’s exterior, so that more paintings could be hung, more sculptures placed, more plays staged, more dances danced, and more movies viewed.

Pictures don’t do it justice. Not until you are standing outside on that sloping plaza with its over-sized ocean liner air vents bellowing honks from the ground and staring smack dab at the giant, abstract edifice – the building itself as much a work of art as the Calder mobile which stands near the entrance.

But we weren’t going into the Centre Pompidou, Kevin said. We were going on top of it. “There’s a bar on the roof where you can pretty much see all of Paris,” he informed us.

We rode the escalator, enclosed in plastic tubing reminiscent of those old Habitrails for pet hamsters. Kevin said the escalator was designed to give riders an exhibit of the neighborhood in stages, from ground level to rooftop. As summer temperatures rose, Parisians ascended from the bistros and cafes to rooftop gardens to escape the heat. “Parisians love their rooftops,” he told us.

It was an incredible journey.

We stepped off the elevator and told the maître d’ at the host station for Le Georges that we wanted an outdoor table for four. We sat and ordered drinks and appetizers and chatted, enjoying the view. After a bit, we walked around the perimeter of the patio, as Kevin pointed out this landmark, that cathedral. We stood at a rail and took turns taking pictures of each other with the rooftops of Paris as a backdrop.

“Boy, that’s a familiar sight,” said a rangy looking gray-haired guy in Ray-Bans, jeans, and cowboy boots sitting at a table with a blonde-haired woman of a certain age wearing a low-cut caftan. “I’ve taken that picture many a time myself.”

He offered to take a picture of the four of us, and we thanked him. When he returned to his table, it suddenly clicked why he looked so familiar.

“Sam Shepard?” I exclaimed. I grabbed his hand and shook it vigorously.

“Sam Shepard?” I exclaimed. I grabbed his hand and shook it vigorously. “Thank you so much. Your work has meant so much to me.”

He grinned, thanked me, and I released my grip. Wow. I just stood there. He just sat there, and then I said, “Well, bye.” Striking a balance between wanting to talk his ear off, wanting to respect his privacy, and wanting to appear cool and nonchalant in front of him, like Hey, no big deal. You’re a writer. I’m a writer, too.

You know how it is.

“Enjoy your stay,” he said. And we walked off, into the bowels of Le Georges so I could hide from Sam Shepard while I freaked out. “Can you believe that? We just met Sam Shepard!” I exclaimed.

Someone asked if I wanted to go back and get a picture with him. I couldn’t bring myself to go back out there. I was so gobsmacked, stunned, whatever you call it when you suddenly become star-struck with your tongue unglued and make a fool of yourself in front of a writer you respect so profoundly. “I mean, I just automatically grabbed his hand and started shaking it like an idiot.”

Truth be told, while I was shaking his hand, all I could think about is the time I met Jim Carroll, the heroin-addicted punk rock poet and musician, and the story he told about getting the crabs from Patti Smith, who had probably got them from Shepard. I wanted to blurt out, “Hey, I know Jim Carroll. Is it true about the crabs?”

But I restrained myself just enough to maintain a shred of dignity.

After exploring the cave-like bar inside Le Georges and using the bathroom, we went outside. Shepard and his lady friend were gone. We were free to move about without further embarrassment. Questions circled through my brain. Why was Shepard here? Was he on vacation? Staging a revival of one of his plays? Shooting a movie? Who was that woman? Obviously not Jessica Lange. So who?

I remember googling Shepard and Paris later that day, and, yes, there was a revival of one of his plays, “Fool for Love,” playing in London at Charing Cross Road, and “Buried Child” due to open in November at Trafalgar Studio. So maybe he decided to hop over to Paris for a quiet little getaway and here I was barging in on his downtime.

With all those questions and emotions churning in my head, we descended the escalator in a daze, slowly inching back to street level, back among the citizens of Paris, who were oblivious to our recent brush with fame.

Nine months later, Shepard died at the age of 73. I regretted for a moment that I didn’t get that picture with him when I had the chance, but at least I have the memory of him shaking my hand and giving me that lopsided grin of recognition, writer to writer.