On witches, Reds and Spacey 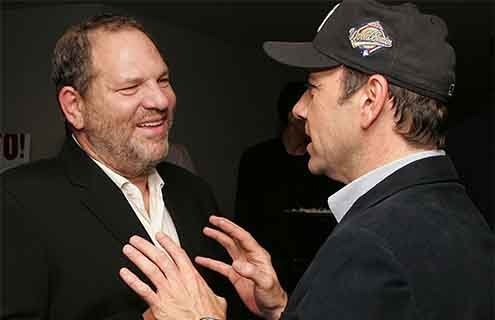 ncidents of mass hysteria figure prominently in America’s young and impetuous history. In the early colonial era, it tried and executed women as witches with little to go on but rumors of seemingly unholy conduct. Centuries later, millions watched on early television as Congress purged Hollywood of “Communist sympathizers” with scant proof the many accused had ever participated in national let alone international conspiracies. In both instances, the pursuit of the “wicked” was motivated by a tangle of rectitude, voyeurism and fear, emotions that gave retribution its virtuous clout.

The acclaimed actor Kevin Spacey is being visited by just such retribution, its sexual component adding further kindling to an already righteous blaze. Accused of preying on boys and men over his 35-year career, Spacey’s downfall has taken less than a month to unfold. Like fat cat Hollywood producer Harvey Weinstein before him, Spacey has been disgraced, discarded and presumed guilty of transgressions only his accusers can vouchsafe as true. He will face no trial because there’s no prosecution equipped to substantiate backdoor impropriety. He is the first high-profile figure since President Bill Clinton to endure such a swift reversal of fortune, and even Clinton managed to cling to the last year of his presidency.

In Puritan America it mattered little that at least some of the so-called Salem witches were victims of epilepsy or mental illness whose seizures were willfully interpreted satanic raptures. In the Joe McCarthy-era 1950s, the fact that so-called Communists were mostly screenwriters and actors who’d dabbled in anti-Fascist prewar leftism was ignored. The Red-bating mood possessed raptures of its own, transforming its own witches into cartoon monstrosities. Dozens were blacklisted, with Walt Disney and Ronald Reagan leading film industry charge.

Yet neither the Salem trials nor the Hollywood purges rubbed up against America’s seemingly endless and volatile sexual contradictions.

Despite decades of progressive urban thinking and ever-expanding gender definitions, America as a 50-state whole remains hopelessly wedged between religious and secular notions of sexual conduct and practices. Like race, sexuality remains an edgy subject in many household and community circles. Insecurity and shame still influences the age-old tension between male power and female ambition, with neither side fully equipped to navigate the wild intersection between complicity and compliance, lust and rejection. Adding to the bonfire, pornography’s massive online presence adjusts early carnal wiring as resolutely as Disney’s vivid animals once enlivened preadolescent fantasies. Though men and women are more sexually informed (and tolerant) than ever before, they’re also more clannish and suspicious of each other’s motives, social media producing as many clashes as connections. In pop culture, concepts of male charm and female virtue, and the interaction between the two, are quaint at best. Finally, the American marketplace is more vulgar and predations than ever, exalting a “bro” culture of male populism in which “girls” are both the object of desire and the enemy, because they’re now entitled to refuse advances, and refusal is antithetical to a newly minted set of young-to-old male expectations. Anti-sophistication is cool. The door to antagonism is left ajar.

The self-discipline once associated with passage from boastful adolescence into adult restraint intercedes less often. Enlightened censorship intended to tame testosterone in the public realm has collapsed like communism’s flimsy wall. Video fiction is realistically rude and decorum exists in name only.

In social terms, this abrasive mix makes for a simplistic landscape of gropers and victims with the latter eager for once to come forward. Alleged sexual misconduct is deprived of qualifiers and due process. Cleansing retribution — like Kennedy’s anti-discriminatory Affirmative Action — is meant to acknowledge centuries of wrongs and fast-track the fix. Alleged sexual perpetrators, like witches and Communists, are seen as abnormal people whose misbegotten choices have exposed them to naturally mandated revenge that needs no law to advise it, “hatred caused by … fear of human nature,” as Hungarian novelist László Krasznahorkai puts it. Details of specific sex acts are detailed — they titillate, while the lead-up is set aside — it might distract. Victims are pitied as helpless, accusers vile, with society required to atone for its intolerable moral lapse. One allegation is awful; two establish “proof”; three or more are tantamount to social disbarment. Public shaming follows with lynch mob resolve.

Hollywood’s elite adheres to the progressive left and tends to respond to culpability as if its artistic permissiveness gives its members further to fall. Contaminated Spacey is being busily airbrushed from existence. His status is in some ways more pathetic than Weinstein’s because he included hopelessly ill-timed remarks about his own sexuality while defending himself from changes by a former boy child star.

Like a Stalin-era prisoner, Stacey will likely be urged to confess his sins, beg forgiveness, and promise to cleanse his abhorrence through personal repair. He’ll be asked to accept his ostracizing with grace and thank god America is now a secular state, sparing him the gallows. He’s one less witch.

In the early 1950s, the House Un-American Activities Committee repeatedly interrogated Hollywood figures regarding alleged (that word again) Communist affiliation. On one occasion, Committee Chairman Parnell Thomas faced screenwriter John Howard Lawson, an avowed Communist. Their opening exchange made it clear that, once labeled, witches are witches and have nowhere to go.

Lawson: “It’s unfortunate and tragic that I have to teach this committee the basic principles of Americanism.”

Lawson: “I am framing my answer in the only way in which any American citizen can frame his answer to …”

Thomas: “Then you deny it?”

Rarely was Thomas able to complete his thoughts. Soon after, he was blacklisted.