On the roof with Alvin 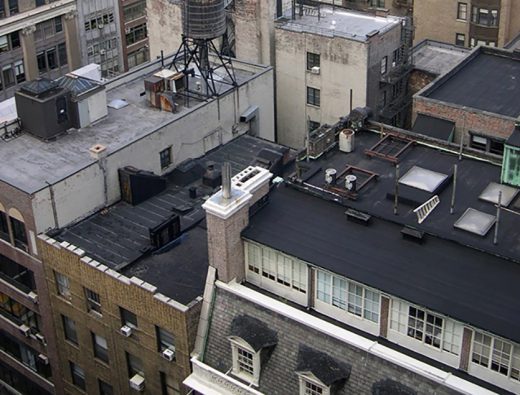 Alvin kept on going up the stairs to the roof. He was beginning to make me nervous….
H

arry “The Indian” Waltzer was a “made” guy in what used to be called the Jewish Mafia in New York City. He was also owner of the Lower East Side slum where I rented my first apartment in 1969.

His son Alvin managed the property from an illegal gambling site (“numbers drop”) masquerading as a toyshop in a storefront on the ground floor.

The elder Waltzer looked and acted the part of a Mafioso. He had done a stretch at Sing Sing for racketeering — strong-arm work for the newspaper deliverers’ union. When I met him, he wore a fedora and a cashmere overcoat over a pinstripe suit. His shoes were Italian and hand-made.

Alvin, in turn, didn’t look anything like a gangster. For that matter, what kind of underworld criminal is named after a chipmunk? He slouched in his office chair clad in ill-considered polyester shirts with clownish 70s collar points tucked sloppily into brown Sansabelt slacks. His shoes were a dirty suede style called Desert Boots. His eyes, dusty red-veined marbles set blearily in a pale doughy face, typically looked as though he’d just woken up late after a hard night.

So when I say my landlord was a crook, I mean it.

But that crookedness didn’t particularly affect me. I paid my $45.70 rent on time and he ignored my requests for repairs in what was a standard landlord-tenant relationship. Normally, we never saw each other.

But on one nice summer evening, Alvin met me in front of the building as I came home from my job as a printing press operator at the Accurate Envelope Company.

“I need to talk to you about something,” he said. He seemed uncharacteristically focused.

“Okay,” I replied, and waited for him to speak.

But instead of talking, he went into the building and started climbing the stairs and I followed, wondering what he needed to tell me that required privacy. I thought we might be going to my apartment on the top floor, but when we got there, he kept on going up the stairs to the roof.

Alvin didn’t look like a gangster. For that matter, what kind of underworld criminal is named after a chipmunk?

He was beginning to make me nervous. If he had looked just a bit more properly criminal, I’m not sure I would have followed him at all.

On the roof, we crunched our way over the gravel to the back of the building. Finally he stopped. A noiseless breeze stole in from the East River. The bustle of the street was far away. I looked at him. He looked all around to ensure no one was listening. Then he leaned in close and said:

I almost laughed out loud but didn’t. It would have been disrespectful to Alvin, who was impatiently shifting his gaze between my left eye and my right, vainly searching for some glint of comprehension, some tiny sign that I grasped the magnitude of what he had just told me.

Loath to disturb our newfound bond, I suppressed all amusement. “Are you sure?” I said finally. “How do you know?”

“They came to the store and asked me if you lived in this building.” He raised a hand reassuringly, palm toward me, and shook his head. “I didn’t tell them anything.”

I nodded solemnly: “That’s good. I’m glad. But actually … they can’t be looking all that hard. My name is on the mailbox and in the phone book.”

“I didn’t tell them that,” he said quickly.

“No, no,” I said. “I appreciate you did the right thing. I’m just saying, think about it. If they didn’t already know where I was, how did they know to ask you? Are they just going all over New York City, building by building, asking landlords if I live there?”

By the late 1960s, J. Edgar Hoover wasn’t as avid in his hunt for American domestic communists.

This seemed to disconcert Alvin a little.

“If they come back again,” I told him, “just tell them I’m in apartment 13, on the top floor, in the back. I’m not hiding. They know where I live.”

“So you don’t care if they find you?”

The thought crossed my mind that we were now friends. I could ask Alvin about repairing my windows.

But his landlord superpowers immediately detected my presumptuousness. His interest in me and my curious relationship with the FBI vanished. He shook my hand limply and left.

Should I have explained that I was a communist? That “looking” for me was the usual stupid FBI charade? Nah. Much better that he thought I was a fellow outlaw.

I savored the moment for a bit, elated. Apparently our group, the “Provisional Organizing Committee to Reconstitute a Genuine Marxist-Leninist Communist Party in the United States,” now rated FBI attention. All 60 of us, more or less. It was as if we’d graduated.

I descended the stairs to my proletarian abode (including a code-violating extension cord that tapped into the hall lights), low ceilings, a bathtub in the kitchen, a lead-paint-peeling windows, a cracked floor, and mice and cock roaches). I greeted my companions, a chicken-thieving cat and cowardly dog, feeding the one, and walking the other, no FBI in sight.