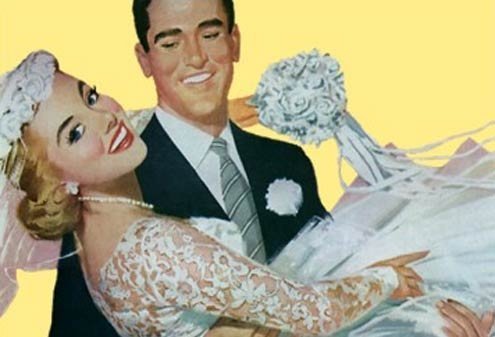 It was perfect, just perfect, she said.
&

#8220;Ah, marriage,” Julie said with a sigh. The tone was unexpected for a newlywed. A few months earlier Julie had returned from Dublin where she described her wedding day as “the sweetest day of my life.”

I had listened to her relay the details: an unusually sunny day, a stone chapel, friends who arrived laughing and joyful. “It was perfect, just perfect,” she said. She beamed in the retelling as if she was still there.

Now, in front of me, Julie’s eyes were dark and shoulders curved.

“Nobody tells you how hard the first year is,” she said. “I just wish I’d known. I was expecting wedded bliss, at least for a while.”

I listened quietly, strangely unable to respond with any assurance.

The truth was, I wasn’t sure. I felt her dismay too clearly.

“Jack is depressed. He’s unhappy at work and has no friends. He’s taken to drinking.”

I had heard some of this before.

“He likes a couple of guys down at the pub, but they’re the bartenders. They don’t exactly help matters.” Her eyes lifted for a minute to roll.

“Was he like this before you got married? I seem to recall he didn’t like his job back then too.”

“Yea. He’s needed to make a change for a while now. I try to be supportive and offer him advice, but he doesn’t listen to me. Already I’ve become the wife he ignores, who is too close to be taken seriously. How does this happen? This time last year I was his best friend.”

I had no answers and we both sat silent. I considered replying with a pep talk to change the mood. Something like,” Sure the first year is hard, it’s an adjustment, and it’s normal. The relationship is in transition and it’s difficult to know when to get close and when to give space, how to help when you see your partner suffer.” I couldn’t say any of this because it sounded like direct lines from the kind of inspirational books I threw away.

From my own experience, the difficulties at the beginning never go away. They instead become part and parcel of what shapes day-to-day life. The person one loves also becomes the person one has to put up with. I never found people to change in the way I wanted. Only my acceptance made it better. I hoped Julie would find her way.

“I’m sorry to show up and dump all this on you,” she said. “But you asked and I know you could tell if I was lying.”

“I think it’s just life, you know. Not always easy,” she nodded.

“What do you say we have a drink? I think I could use one,” she said.

“Absolutely,” I replied. “But on one condition: we toast to your marriage.”

She took a deep breath and smiled, hopeful at last.