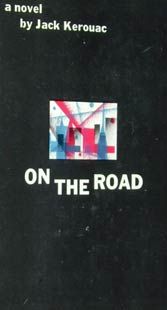 Read this not for the Benzedrine-fueled road quirks but for its unquenchable yearning. Half-a-century later Kerouac’s jagged joy won’t quit. His take-to-the-highway Americana is anti-skeptical, a burnished bit of a Walt Whitman acreage pushed Westward Ho (and south — though the Mexican coda falters).

Kerouac is Sal Paradise (Salvatore del paradiso if you tinker…). His beat friends are Dean, Marylou, Carlo Marx, Ed Dunkel, Old Bull Lee. They’re twenty-something, “very amazing maniacs” rummaging among post-war hankerings, distilling jazz, God, sex, fast cars, into a recurrent “wow.” Dean Moriarty, the ex-con “holy GOOF” — he of the “suffering bulk and bursting ecstasies” — organizes the book’s pagan magnetism. He’s the journey, Sal his disciple, and “the road is life.” California is “wild, sweaty, important, the land of the lonely…; New York “the mad dream… grabbing, taking, giving, sighing, dying…”; Denver “…where the mountains roll down foothilling to the plain…”; and Mexico “the magic land at the end of the road…”

Kerouac is a sucker for “gurls, gurls, gurls” and tugs tenderly at sensuality’s “ache and stab.” Kind-hearted Sal is smitten by Dean’s teenaged girlfriend Marylou, the story’s Madonna-whore, and the prose feels her shivers: “Marylou was watching Dean as she had watched him clear across the country and back, out of the corner of her eye — with a sullen, sad air, as though she wanted to cut off his head and hide it in her closet, an envious rueful love of him so amazingly himself. All raging and sniffy and crazy-wayed, a smile of tender dotage but also sinister envy that frightened me about her, a love she knew would never bear fruit because when she looked at his hangjawed boney face will all its male self-containment and absentmindedness she knew he was too mad.” Now, that’s jazz.